On the Road with Travel Initiatives 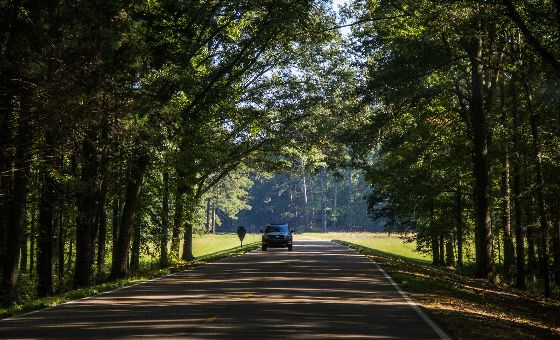 The spring and fall are always the busiest times of the year in the bicycle advocacy world, and our Travel Initiatives team has been on the road for 3 of the last 6 weeks, making connections and presentations at conferences, meeting with partners on advocacy projects, and participating in U.S. Bicycle Route dedication events. I still get the question from hosts on my trip, and even my family, friends and co-workers, “So what exactly do you do” or “What is Travel Incentives?” My partner said he told people I “answer emails” for my job, which is very true, but not nearly the whole picture.

What is Travel Initiatives Anyway?

These are good questions and perhaps part of the confusion comes from the fact that Travel Initiatives is a broad umbrella that captures anything related to our mission to improve bicycle travel conditions. “Conditions” could be anything from addressing poor placement of rumble strips, to improving accessibility for bicycles on trains, to increasing safety for cycling in national parks, to coordinating U.S. Bicycle Route development, to providing bicycle tourism resources, to providing letters of support for improved bicycle infrastructure projects along national routes. Our priorities are focused on bicycle travel and tourism, the Adventure Cycling Route Network and U.S. Bicycle Route System, and state/national-scale projects that affect bicycle travelers’ safety, accessibility and enjoyment of touring. It requires coordinating many different local, state and national partnerships such as transportation, tourism, government and recreation agencies, bicycle and trail groups, the National Park Service, Amtrak, state parks, and even international groups like the European Cyclist Federation.

There is always something new “coming down the pike,” as Ginny says, and while having a boundless scope of work that can get done in a day can be overwhelming, the variability and flexibility of the work is invigorating and motivating. And since we do work mostly through computers and phones, travel helps us to gain perspective and understanding of the issues, while meeting our partners and experiencing the places and routes in person. Sometimes the only way to truly understand the issues along a particular bicycle route is to bike it.

Here is a brief look at a few of the major projects we have been involved in over the last two months, and maybe they can provide a more tangible example of what we do.

The Natchez Trace Parkway is one of those places whose natural beauty and history is hard to really grasp until you’re there. A national park with a relatively flat parkway that runs for 444 miles through the woods of Mississippi, Alabama, and Tennessee sounded nice, but didn’t strike me as anything special. I was intrigued though, by the raving reports from cyclists who had bicycled through there and the excitement of cyclists who had it on their bucket list. Ginny and I had been working with partners from the National Park Service and Natchez Trace Parkway Association for over a year on a “Share the Parkway” project to improve safety for cyclists and rebrand the parkway as a national park (as opposed to a commuter route), so I was interested to have the opportunity to travel there and experience the Natchez Trace in person. And it blew my expectations out of the water, but not in a way I can easily describe, so I hope some of these photos can do justice to the unique character of the parkway and the incredible natural, historical, and cultural heritage that it offers. 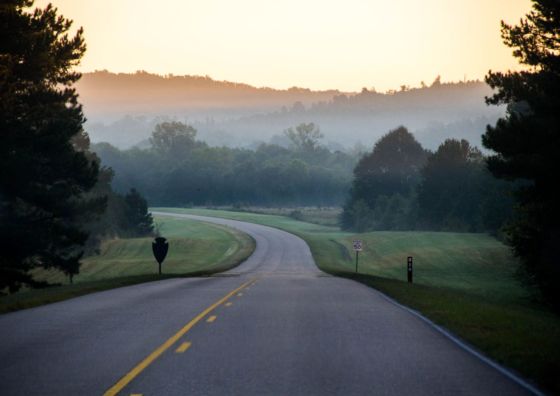 The Natchez Trace Parkway is stunningly beautiful in the early morning. 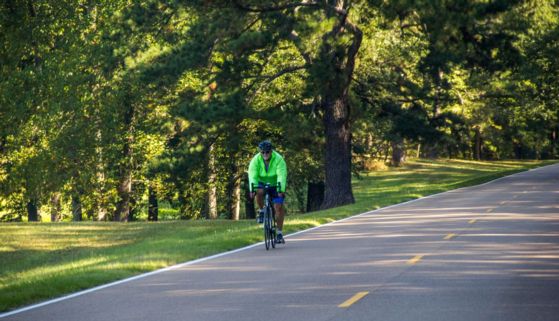 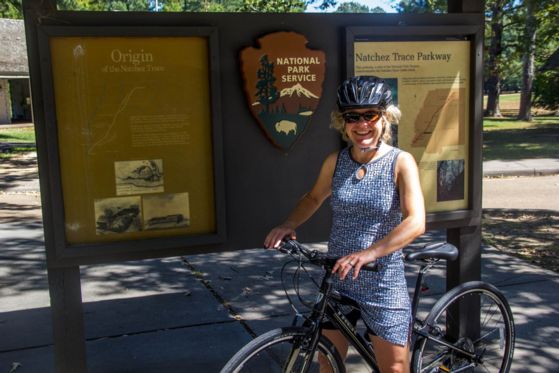 Ginny and I rode along the Parkway on the bike paths in Ridgeland, Mississippi 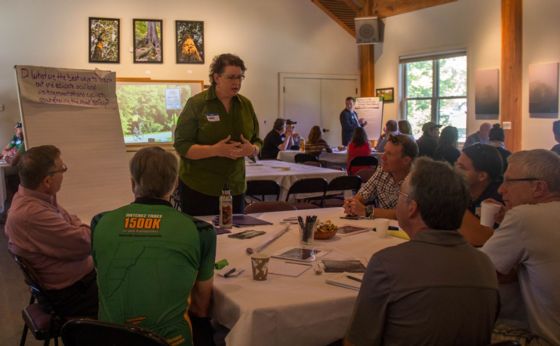 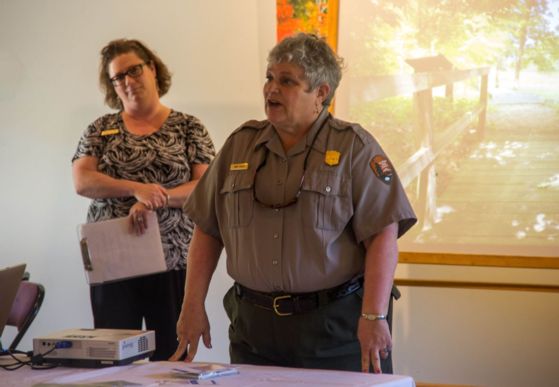 Ginny and I helped to facilitate group discussions at the meetings where we gathered feedback and gained an understanding of participants’ perspectives. We had seen mostly positive feedback through social media, but there were also some negative responses, so we weren’t sure what to expect from an in-person gathering. As it turned out, the most-represented road-user group at the meetings was cyclists, which shouldn’t have been a big surprise despite our efforts to maintain neutrality and appeal to all user groups. They had lots of great feedback and it was interesting to see how the same question asked at each meeting would elicit new (and often opposing) perspectives and ideas. The NPS staff will now compile all of the recorded input and use it to inform our next steps. Future initiatives include outreach to visitors on safely sharing the road, providing resources such as lights or reflective gear to help cyclists be more visible, and working with the media on educational TV or radio PSAs about distracted driving, speeding or other safety topics. 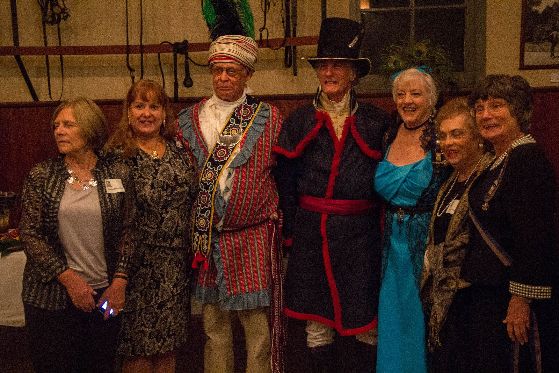 The Natchez Trace Parkway Association educates the public about the history of the Parkway. 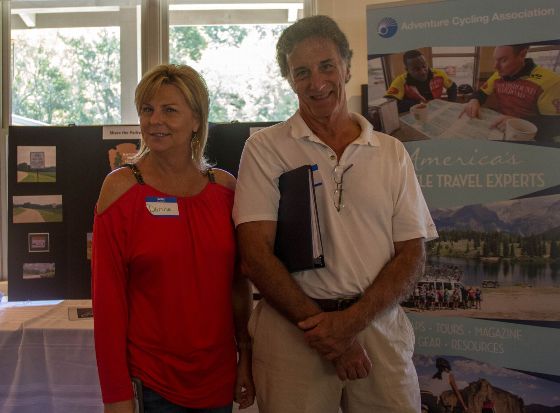 Traveling helps us to gain perspective of not only the places and bicycle routes we work on, but also the people and cultures we work with. I had heard rave reviews of Farmington, Missouri's bike hostel, called Al's Place from cyclists traveling through there on the TransAmerica Trail, but I knew very little about the people or the community behind the scenes. So I was excited to visit last week and get to meet people who I'd spoken with many times over the phone, like Virginia Blaine, Farmington's Bicycle Lady and Brent Hugh, Missouri Bicycle Federation's director in person. AND I was going to get to stay in Al's Place for three nights. 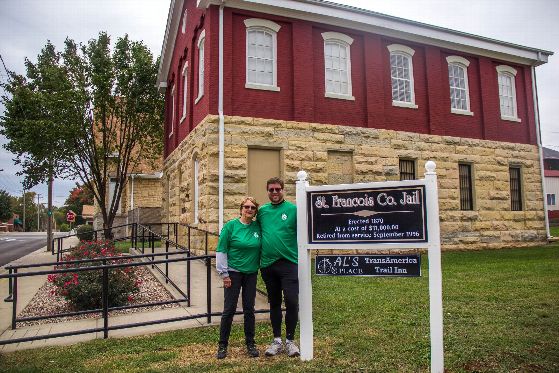 Virginia Blaine and Brent Hugh outside of Al's Place

Farmington is a small Missouri community with a population of about 17,000 and seems an unlikely bicycle travel destination. Perhaps it was the TransAm and cross-country cyclists coming through the town, or for some it may have started with the doctor's orders, but bicycle travel and cycling seems to have ignited a spark in many local resident's lives and created a community spirit of hospitality and dedication to making Farmington a better place to bike and visit by bike. So when I made a call to Virginia Blaine last spring about organizing a dedication celebration of the newly designated and signed U.S. Bicycle Route 76, she and the cycling community jumped on board. A few weeks later I called again to follow up, and was surprised to find that they had pretty much already figured everything out — they were going to make USBR 76 T-shirts, a celebration cake and lunch, a ride and ribbon-cutting, speakers, tours of Al's Place, the city staff was already involved, and, with her usual sense of humor, Virginia stated that "Farmington's celebration is going to be better than Springfield's." Springfield's Ozark Greenways was planning a similar celebration on the same day, and I thought a little friendly competition couldn't hurt. 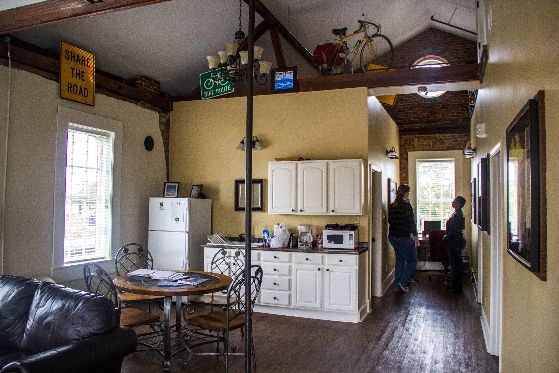 Touring the inside of Al's Place bike hostel

I can't speak to which one was better, but Farmington sure laid out the red carpet and everyone pitched in to make the dedication event a success. When it looked like it might rain all of Saturday, the owners of Sticky's USA Cafe, a neighboring restaurant, made calls to find a tent large enough to hold everyone. I started meeting more and more of the people behind the scenes who were all generous and enthusiastic hosts sharing stories about bike travel and how it influenced their lives.Thankfully the weather cooperated, and though a bit chilly, the ride and dedication event drew about 40 people outside of Al's Place. 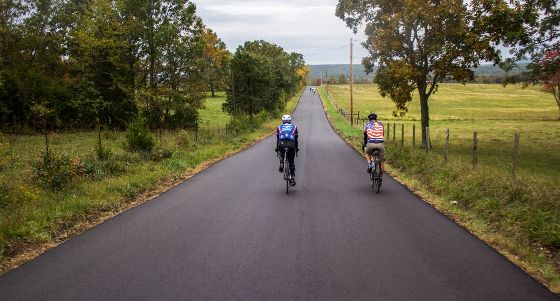 A cyclist on the ride sported the signature TransAmerica Trail jersey with an American flag on the back. 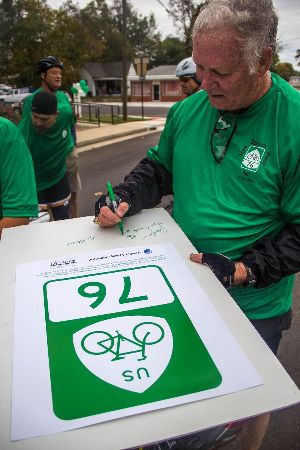 All the cyclists on the ride autographed a copy of the U.S. Bicycle Route 76 poster for Al's Place. 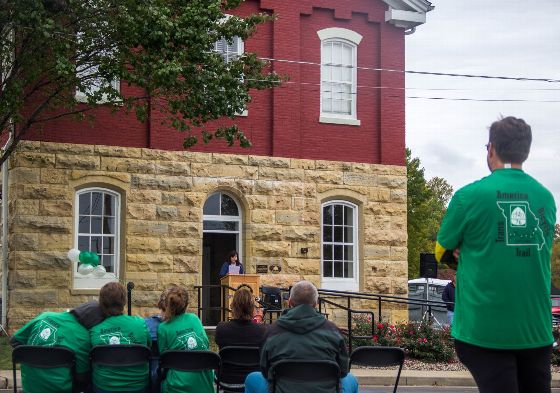 Speakers shared their experiences of the TransAmerica Trail and participating in Bikecentennial, the history, and the continuing work to create bicycle trails and U.S. Bicycle Routes in Missouri. 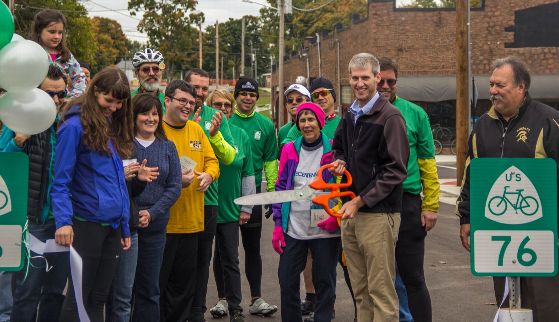 The ribbon was officially cut by Missouri Dept of Transportation engineer, Brian Okenfuss.

We're looking forward to our next trip to San Diego for the National Bicycle Tourism conference November 5-8, and then we'll see where the road takes us in 2015!

We live near the western terminus of the KATY trail. The longest rails to trails. We ride extensively in western MO, and have great experiences! We will head east now to ride eastern side of the state! Hope to see you on the trail!!

I am glad to see that in my state Missouri is by far the rudest state to cyclist I have seen .I live here and it is very hard for people to share he road with bicycles. they think we belong on the sidewalk or never leaving our yards. They don't look at bicycles as alternate transportation .Now we got part of the trans Am going through east and west in Missouri now we need a route going north to south like the Missippi river trail does .We got a lot of bicycle traffic here in new Madrid Mo as I am a warm showers host . we got a few organized tours here like the fault line tour and a couple smaller like the cotton bowel ramble and a few others. but we need help getting routes suitable for cycling It is very dangerous here for us. please Help