The time has finally arrived — the Underground Railroad Detroit Alternate, section 1, is ready to ride. Section 1 begins in Oberlin, Ohio, and travels northwest to Sandusky and Toledo before entering southern Michigan, traveling through significant historic communities including Adrian, Ann Arbor, and Detroit. The route then continues north to Marine City, using the ferry service to Sombra, Ontario, the final stop on this section.

When Section 2 is released this winter, cyclists will be able to take the ferry from Sandusky, Ohio, to Essex County, Ontario, where the route will navigate the southern peninsula of Ontario, heading toward Windsor. Then they will travel inland to visit historic settlements and sites before reconnecting with the Detroit Alternate Section 1 in Sombra. The two options become one before heading north to reconnect with the main Underground Railroad Bicycle Route Section 5, where both terminate in Owen Sound, ON.

This route will truly be a ride with options. Cyclists can now experience even more of the region, combining other Adventure Cycling routes such as the Northern Tier and the Lake Erie Connector for one- or two-day rides, weeklong loops, or extended adventures.

Section 1 of the Detroit Alternate is chock full of amazing Underground Railroad history. For a sampling, check out the route highlights on our website.

For a deeper understanding of the region's historic ties to the Underground Railroad and the numerous associations with the abolition movement and anti-slavery sentiment, I recommend reading The Underground Railroad in Michigan, by Carol Mull (available through Amazon). Carol and many of the other Michigan Freedom Trails Commission members, including Kimberly Simmons, Veta Tucker, Leslie Williams, and Rochelle Danquah, in addition to our UGRR Advisory Boards, helped outline the rich heritage of the region while making this a great cycling route. Special thanks go out to Detroit Greenways coordinator Todd Scott, route researcher Tony Ratajczak, and Detroit city staff. Thanks to their wisdom and expertise, the route incorporates a dynamic mix of historic sites, scenic roads, and both the rural and urban cycling experience. 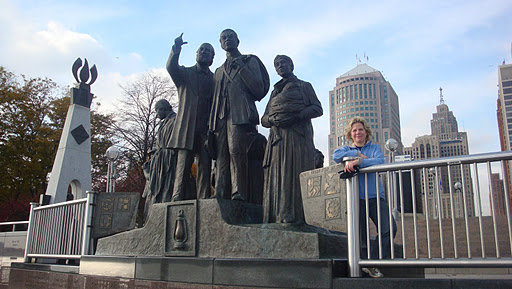 This is truly an amazing historic ride. Southern Michigan was a hotbed of abolition activity, and the Underground Railroad was alive and thriving before and during the Civil War. Southern Ontario became home to thousands of African Americans escaping persecution and re-enslavement, especially after passage of the Fugitive Slave Act of 1850. For a peek inside a family's true story that relates directly to communities along the Underground Railroad Bicycle Route, read I’ve Got a Home in the Glory Land; A Lost Tale of the Underground Railroad by Karolyn Smardz Frost. Plan also to visit some of the museums and churches along the way, including Detroit's Charles H. Wright Museum of African American History and the Second Baptist Church (find more preservation and museum listings on our Historical Resources page). All along the route, you'll find numerous Underground Railroad homes, in addition to historic markers and monuments, none better than the Gateway to Freedom Monument (pictured above) at Hart Plaza on the Detroit Riverfront, created by the gifted sculptor Ed Dwight.

The Detroit Riverfront is significant in and of itself. This was the crossing point for thousands of freedom seekers moving to Canada. The city of Windsor, Ontario (pictured above), directly across the river, has a matching monument marking their safe passage to freedom. The riverfront has gone through a recent renovation and boasts a wonderful walkway, a bike shop, and public spaces for relaxing. Stay tuned for more about Windsor and the riverfront in the future. Not only will Southern Ontario and Windsor be part of the Detroit Alternate, Section 2, being released this winter, but we hope to announce ferry service between Detroit and Windsor by then as well.

If you'd like to celebrate the opening of the route with many of the people instrumental in helping us create it, please save the dates of October 22 and 23. There will be a ribbon-cutting ceremony and bike ride through Detroit during a much grander Underground Railroad Celebration, which includes the release of a documentary film. We'll keep you informed with more information as it becomes available.

With fall -- a prime time for cycling in northern Ohio and southern Michigan -- just around the corner, it's not too early to start planning your trip. The Detroit Alternate Section 1 map is available for purchase in our store and you can start learning about the history and the route itself by visiting our webpages devoted to the Underground Railroad Bicycle Route project. Now, get out there and enjoy yourself!

We are truly excited and looking forward to Oct. 22nd in Detroit. The launching of the Detroit Alternate route as well as the rededication of the International UGRR Memorial Monument which is being restored to its original magnificence by its sculptor, Ed Dwight. Hope to see all in Detroit!!