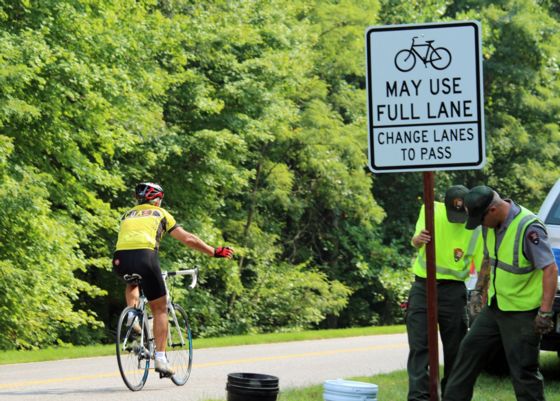 As bicycle tourism grows in popularity, national parks across the country are seeing more and more two-wheeled visitors, but are often unprepared or unaware of how to accommodate them and ensure their safety on roads often designed for motorized vehicles. Many Adventure Cycling routes pass through national parks and we often hear feedback from cyclists about their experiences in national parks. As such, national parks have become a focal point of our advocacy efforts to improve bicycle travel conditions. Last year, Adventure Cycling signed an agreement with the National Park Service that demonstrates our mutual interest in improving and promoting bicycle tourism in national parks, and while the agreement is non-binding, it provides us with backing to pursue bicycle tourism/travel initiatives with individual park units.

Soon after this agreement was signed, we heard from local residents from gateway communities along the Natchez Trace Parkway who were concerned about cyclist safety following multiple cyclist fatalities along the Parkway. Bicycling is becoming more popular on the Parkway for both locals and visitors, and the 444-mile roadway has very narrow travel lanes with no shoulders or bicycle facilities. Vehicles and bicycles are increasingly coming into conflict, which creates safety concerns and raises the risk for accidents and fatalities. Recently Gary Holdiness, a local cyclist, doctor, husband, father, and friend was cycling on the Parkway when he was struck and killed by a teenager who was found to be texting at the time. His death sparked the creation of a fund in his name for cycling safety initiatives, and Natchez Trace Parkway staff, Adventure Cycling staff, members of the Natchez Trace Parkway Association (NTPA) and statewide advocacy groups partnered to identify how to effectively address safety and sharing the road issues on the Parkway. 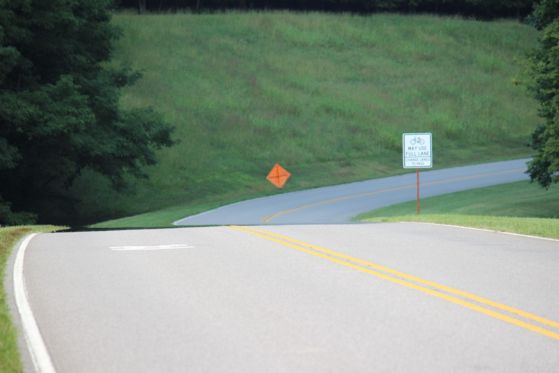 A sign and sharrow alert drivers to cyclists on the Parkway

A year later, we are excited to announce the implementation of a long term project and partnership that will “create an atmosphere of responsibility and ownership of the Natchez Trace Parkway as a unit of the National Park Service and a recreational treasure that should be shared safely by all Parkway users.” The Parkway is focusing on this project as part of their NPS Centennial Initiative, and leading up to the park’s Centennial on August 25, 2016 the park has committed to working with partners to:

In late August of this year, the pilot project was initiated when the Parkway and the NTPA installed sharrows and “cyclist may use full lane, change lanes to pass” signs in two locations – Tupelo, MS, and Leipers Fork, TN. Signs and sharrows will also be installed near Kosciusko, MS as well. This will allow us to test a strategic approach on a small scale, and if successful, the project will be expanded along the Parkway. 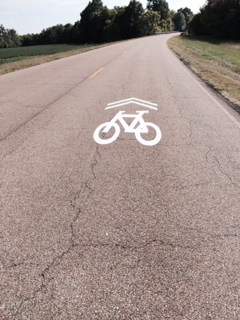 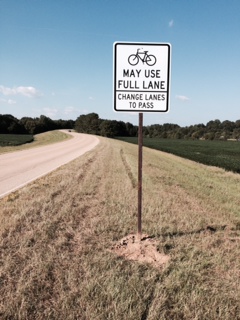 Community Engagement on the Parkway

Adventure Cycling's Travel Initiatives staff will also be travelling to the Parkway next week to help facilitate public meetings aimed at gaining an understanding of local perspectives about safety and shared use of the Parkway from various road users and the general public. These meetings are part of the pilot project effort to engage gateway communities through outreach to local stakeholders, including city officials, businesses, tourism organizations, and community members. Through these discussions we seek to build awareness of the Parkway as a national park “in your backyard” and educate the public about our efforts to increase safety and shared use of the road. The meetings will be happening in three locations listed below – please join us if you’re in the area!

If you are unable to attend in person but wish to provide your thoughts about shared usage of the Natchez Trace Parkway, please mail those comments to Superintendent Mary Risser at the following address:

A Model for Other National Parks

As the Natchez Trace Parkway makes progress to implement the pilot project, conduct community outreach, and begin the process of creating a culture of awareness and acceptance of safely sharing the Parkway, Adventure Cycling is using this model to reach out to other national parks with similar issues. As more and more national parks experience increasing motor vehicle traffic and associated issues such as congestion, lack of parking, frustrated visitors, greater impacts and over-use of limited resources, they are re-evaluating their transportation corridors, policies, and regulations and seeking new models to better accommodate everyone. We will continue to work with and reach out to national parks to promote bicycle travel/tourism, raise awareness of cyclists' safety and needs, and improve bicycle travel conditions in parks. Stay tuned for more updates on the Natchez Trace and other exciting national park initiatives!

I want to buy these signs to donate to my county government. "Bicycles may use full lane. Change lane to pass"

Where can I buy them?