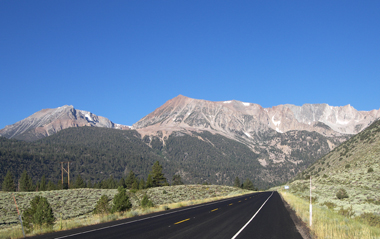 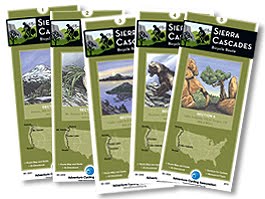 During the first week of April, we were happy to announce the release of the Sierra Cascades Bicycle Route. But now, maps are available! It has been an exciting ramp up to the release including two road trips to cities in Washington and Oregon, as well as California. I thoroughly enjoyed my experience talking about the route to standing room only crowds!

The idea for the Sierra Cascades began as we were wrapping up the Underground Railroad Bicycle Route in 2006. We wanted to explore the idea of another off road route similar to the Great Divide Mountain Bike Route, this time paralleling the Pacific Crest National Scenic Trail (PCT). Our research led us to look at Bil Paul's out-of-print book, The Pacific Crest Bicycle Trail. We soon discovered that our original vision would not be possible due to the multiple areas that were restricted use (read: no bicycles). We decided to stick with the original line of thinking to (roughly) follow the PCT but keep the route on the road.

When it came time to do the research, Bil was a natural choice.

"I began working on the route about the time I was married 30 years ago (1980). ... I would take a week or 10 days each summer to explore likely routes while bike touring, often with cycling partner Patrick Wickman. The whole idea was to offer a road-based route that came as close as possible to the PCT. ... I've taken many groups of cyclists along the various parts of the route. ... I've improved the route in many places by using side roads that I later discovered ... I can truly say that the route was begun 30 years ago, as was my marriage, and they both keep getting better and better!

"I'm grateful to Adventure Cycling Association for adopting the Sierra Cascades route and mapping it, and I hope people newly cycling it will enjoy it as much as I and my friends have. People who love mountain-area biking will love this route. People will also love the great variety in it -- because it has it all -- mountain passes, a stretch of desert, plains, volcanic areas, a bevy of national parks including Yosemite Valley, and the tourist destination of Lake Tahoe. One can experience cold high-altitude camping followed later by a dash across hot, high desert." 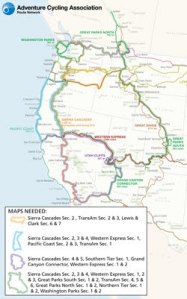 With the introduction of the Sierra Cascades Route, a plethora of new loop route options becomes available in the west by combining it with previously existing routes. A great tour in Oregon, Washington and Idaho would include pieces of the Lewis & Clark Bicycle Trail and the TransAm (with a possible run to our headquarters in Missoula). Another more extensive option would be a loop containing Western Express, a small piece of Great Parks South and the TransAm (or Great Divide Mountain Bike Route). For more examples, see image at right and click to enlarge.

The Sierra Cascades Bicycle Route is a milestone in two ways. First it is our first route to be built from the ground up in GIS (Geographic Information Systems). And second, the adoption of this route brings our route network total miles to over 40,000!

Number of National Parks on route: 7

Photo by Bil Paul - in this photo: approaching Tioga Pass in Yosemite National Park in California, on the Sierra Cascades Bicycle Route

OR Maverick: That's a great idea. I'll file it for future reference.

If you are cycling and camping the Western US, check out the National Forest Sno-parks.

Camping is free in the summer and the facilities are clean and nice. Some even have warming huts where you can escape the elements without crawling into a pup tent.