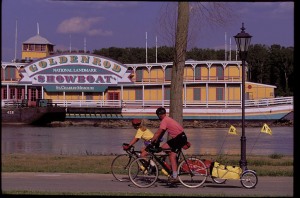 The exploratory journey of Meriwether Lewis and William Clark is a rich part of the historic fabric of the United States. They and their Corps of Discovery traveled thousands of miles across the plains, over the mountains, and down the waterways, cataloging the resources of the land acquired in the Louisiana Purchase.

This goal was not so unlike the task of our veteran researchers, Gayl Teichert and Ernie Franceschi, who set out in August of 2000 in search of a route suitable for bicycling that would echo Lewis and Clark's historic trek by following waterways as much as possible. The release of our Lewis & Clark Bicycle Trail was coordinated with the 200th anniversary of Lewis & Clark's departure, allowing cyclists to ride the route in 2004.

Gayl and Ernie decided that their chosen mode of travel, a 1984 VW van, was probably as close to the conditions that a cyclist would face pedaling the miles as any. As they explored the route options on both sides of the Missouri River and beyond, the van chugged slowly up the hills, overheating its engine, freewheeling the descents, and amplifying the seasonal muggy heat in its air condition-free environment.

No strangers to conducting route research for Adventure Cycling, Gayl and Ernie were astonished at the many possible options for cyclists. This is reflected in the final map set which features 14 mapped options and alternates, not including spurs. However, while these optional routes were generally attractive for their scenic qualities and low traffic counts, services were few and far between.

One thing that had changed dramatically since Lewis & Clark had traveled the regions that Gayl and Ernie were researching was how the rivers shaped the landscape. In the early 1800's the waters were wild and free flowing. By the year 2000, they had been dammed for decades. The Missouri River bottomlands had been completely transformed from hunter and game friendly woods and thickets, from farm rich flood plain soils into unnatural flooded lakes, forcing the complete relocation of native peoples, and any other existing settlements, to higher benches. The Missouri River bottomlands, which had provided the indigenous people a means of hunting and agriculture before and after their restriction to reservations, were destroyed -- flooded by the five dams forming a series of giant lakes along the former Missouri channel. The only vestige of these riparian areas and agricultural enclaves were the bare cottonwood snags which still appeared during low water cycles on the lakes.

The most poignant comment Gayl and Ernie heard was from the lady they visited at the tribal office on the Lower Brule Reservation while collecting service data. She had "lost her home twice", once when her people were forced to the reservation, and again when her valley community was flooded by the Corps of Engineers dam in her childhood.

Like all Adventure Cycling maps, points of interest and cultural heritage markers are important features for explaining the lay of the land cyclists are pedaling through beyond services and directions. On these maps, we made extra efforts to find museums and landmarks related to the history of the people who came before Lewis & Clark to offer their perspective on the events of the time.

The Lewis & Clark Bicycle Trail was our first effort at a historically-based route and based on its success and popularity, we have gone on to create the Tidewater Potomac Heritage Route and the Underground Railroad Bicycle Route. The Underground Railroad continues to grow today as plans are developed for a spur into Detroit, Michigan. Might there be another historic route in our future?

Number of states it passes through: 11

In this photo: Riding along the rivers at the beginning of the Lewis & Clark Bicycle Trail affords you a close-up look of the riverboat culture of yesteryear.