A benefit of adding the newly minted Bicycle Route 66 maps to our existing route network is its intersections with that network. Below are three examples of tours that could be traveled in three weeks or less built (mostly) from a mixture of Adventure Cycling routes. 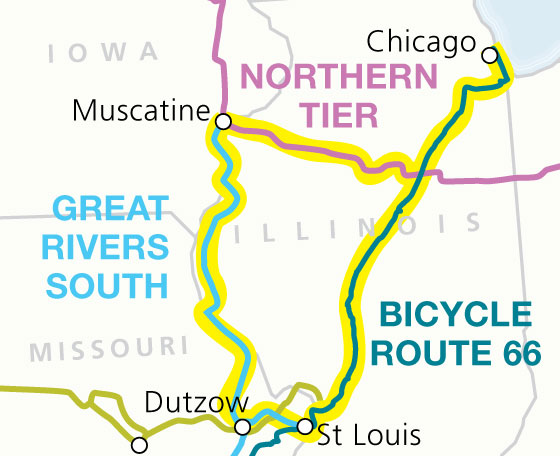 The first is the shortest distance of approximately 1,000 miles in a lollipop shape. It could begin and end in Chicago, Illinois. You would need the following maps: Bicycle Route 66 section 1, Great Rivers South section 1, and Northern Tier section 8 maps. To avoid the humidity of the high summer months, it is recommended to do this tour in spring to early summer or fall. 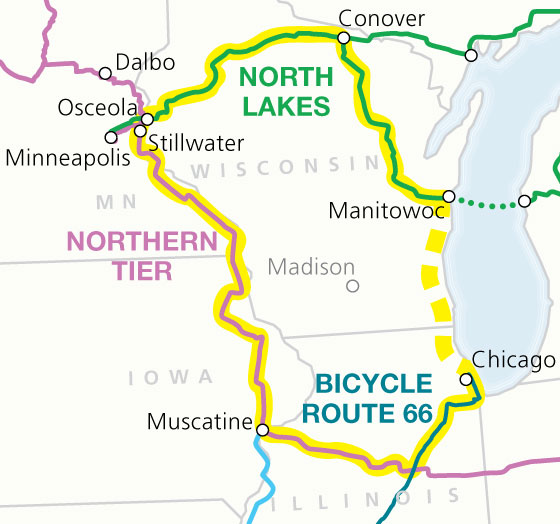 The second loop would also utilize Chicago as the beginning/end point and would measure approximately 1,600 miles. You would need Bicycle Route 66 section 1, Northern Tier section 7 and 8 maps, North Lakes sections 1 and 2 maps. There is a 200 mile gap between Manitowoc, Wisconsin and Chicago. You could fashion your own route using resources from Wisconsin Department of Transportation bicycle maps and League of Illinois Bicyclists. An alterative beginning/end point is Minneapolis, Minnesota and you may wish to add a Northern Tier section 6 map to your order. To avoid the humidity of the high summer months, it is recommended to do this tour in spring or fall.

The third loop is in the west with an ideal beginning/end point in Phoenix, Arizona coming in at around 1,250 miles. For a some additional mileage, alternative beginning/endpoints could be San Diego or Los Angeles, California. You would need Bicycle Route 66 sections 5 and 6, Sierra Cascades section 5, Southern Tier section 1, and the Grand Canyon Connector maps. To avoid the extreme temperatures of the desert stretches on this route, it is recommended to do this tour in spring or fall.