In June 2014, the first TransAm Bike Race will take competitors across 10 states from Astoria, Oregon, to Yorktown, Virginia. They will traverse the 4233-mile TransAmerica Trail as mapped by Adventure Cycling Association. 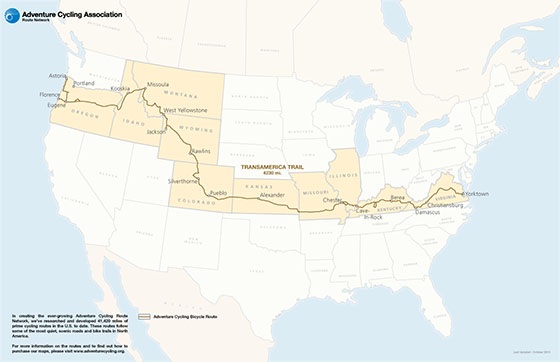 The riders will ride solo, day and night, against each other and a continuous clock, and will be denied any outside assistance. They will be entirely dependent on what they can carry with them or find at local businesses. Their positions will be monitored by live satellite tracking and broadcast to the web where virtual spectators or ‘blue dot watchers’ as they have become known, can follow the action.

Unsupported and underground adventure bike races have been steadily growing in popularity over the last decade in the U.S. and around the world and, thanks to satellite tracking technologies and the web, have developed a widespread and loyal following. Typically the events have been low key and wilderness based with small numbers of autonomous adventurers getting together informally and pitting themselves against each other, nature and the elements with minimal equipment. The most prominent of these events is the Tour Divide which follows Adventure Cycling's Great Divide Mountain Bike Route, and, despite formal administration, has grown to attract a field of over 130 participants. Like the TransAm, there is no entry fee, and no prizes. Racers assume sole responsibility for their own trip, logistics, and personal safety.

This will be the first time such a race takes to pavement and crosses the continental United States. Organizers of a similar ‘Transcontinental’ race, which was staged in Europe for the first time this summer, heard about the TransAm race and pledged their support to get the word out.

“I saw the race on social media, via a follower of our event,” says Mike Hall, race director of the Transcontinental. “I liked what they were doing and I knew that others had been talking about similar ideas for such a race. We’d love to do a Transcontinental in North America but that would be a few years away at the earliest, so I got in touch instead to see how we could help out”

The TransAm Bike Race is drawing racers with a variety of backgrounds such as Tour Divide, the Transcontinental, ultra races such as Race Across America (RAAM), randonneurs, and even some tourists who are looking to move briskly. You can learn more about the race and register at the race website, Facebook page, and Twitter stream.

THE TRANSAM BIKE RACE is to be tracked via spot satellite trackers at trackleaders.com. Contact transam4233@transambikerace.com for more details.

I'm not 60 yet but will takle the task

Just put a prize purse at the end and the drugs will follow!!! Hahahaha