From Washington to Virginia: Growth and Improvements to the U.S. Bicycle Route System 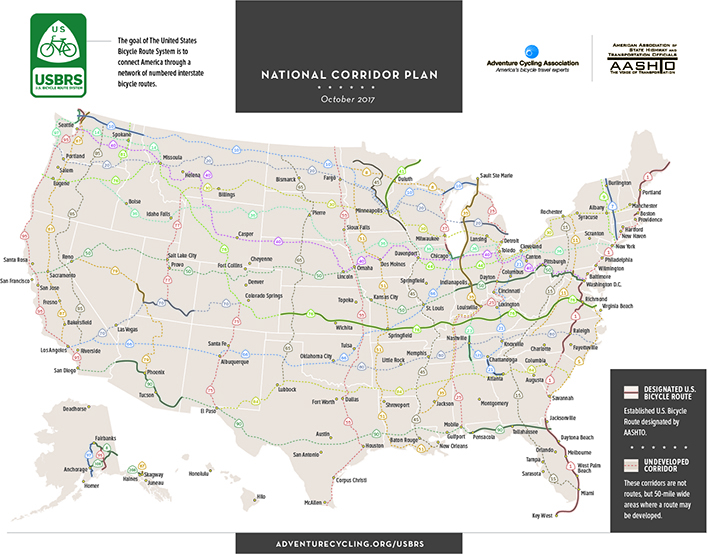 At their recent fall meeting, the American Association of State Highway and Transportation Officials (AASHTO) approved three new U.S. Bicycle Routes (USBRs) in Washington State, as well as realignments to existing USBRs in Michigan and Virginia. While the mileages may be small, these additions are big improvements to connectivity and the overall riding experience.

All three of these newly designated routes in Washington will eventually connect further South to the Oregon border — and beyond.

In Michigan, U.S. Bicycle Route 35 is being realigned just north of the lakefront community of Muskegon. The realignment moves the route off 14.3 miles of roadway, replacing it with 11.2 miles along the newly-constructed Berry Junction Trail. Not only does it improve the cycling experience by making use of this new off-highway path, it effectively shortens the route by a few miles, creating a more streamlined ride. The realignment now connects the Hart Montague Trail (to the north) with the Muskegon Lakefront Trail (to the south) — linking more than 40 miles of separated shared-use pathways/trails.

USBR 35 was originally designated in 2012 and runs for roughly 500 miles along the eastern edge of Lake Michigan before connecting into Indiana. The County Road Commission plans to install USBR 35 signs soon along this new segment.

In Northern Virginia, U.S. Bicycle Route 1 is being realigned onto a new and buffered, shared-use path along Richmond Highway. By moving the route, cyclists are diverted away from busy on-road sections, providing a safer and more enjoyable ride. This realignment also serves to straighten the route and shorten the overall distance by 2.4 miles. USBR 1 currently stretches for 277 miles through Virginia, and will eventually run the length of the East Coast.

Virginia is also realigning USBR 76, ensuring that the route follows the Virginia Capital Trail instead of the parallel roadway. The Virginia Capital Trail is a 52-mile paved, shared-use path that connects downtown Richmond to Jamestown, Virginia. The realignment to USBR 76 takes advantage of the 36 miles from Wills Church Road in Henrico County to Jamestown. USBR 76 is currently mapped at over 550 miles across Virginia, connecting into Kentucky and points west, with plans to one day reach the Pacific Ocean.

With every designation of a new U.S. Bicycle Route or realignment to improve an existing route, we are moving closer to our shared goal of a nationwide network of safe and connected bicycle travel routes.

Here's an interactive map of our routes:

Here's information about all of those routes:

And here's where you can purchase maps from our Cyclosource store: https://www.adventurecycling.org/cyclosource-store/

This post was about the U.S. Bicycle Route System. This is a route network owned by local jurisdictions and we're helping coordinate its completion. Sometimes it overlaps with our own completed route network, mapped by us, and totaling 46,864 miles of bicycle routes across the U.S.

Wife and I leaving by Ferry from Whittier Alaska to Bellingham WA. And riding to Virginia Beach. Interested in buying correct maps for that ride.