Use Your Phone to Navigate the U.S. Bike Route System

May 29, 2017 - Charlie Otto kindly submitted this blog to Adventure Cycling. 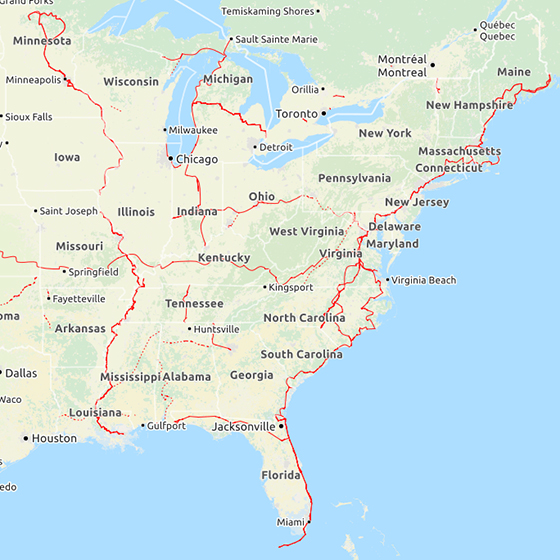 Today’s post was written by Charlie Otto, the co-founder and former owner of Grand Teton Brewing in Wilson, Wyoming, and Victor, Idaho. Charlie began bicycle touring in 1979. Since then, he says, “I have taken more than 25 trips of a month or longer. U.S., Canada, Europe, South America, Cuba, New Zealand, and Thailand with conditions varying from separated, paved bike trails, to off-pavement wilderness dirt routes.” Charlie knows how to use GPX data on mobile devices and provides a tutorial on how you can use OpenCycleMap to follow any designated U.S. Bike Route.

What if there was an interactive, digital map of every bicycle route that has ever been established? What if you could download the data and start riding using your phone or mobile device? That is the goal of OpenCycleMap, an OpenStreetMap rendering layer for cyclists. OpenCycleMap is a volunteer-run, wiki-based mapping project to map all of the designated bike routes in the world.

OpenCycleMap displays the major public bicycle route networks like the U.S. Bicycle Route System and EuroVelo Routes. OpenCycleMap also partners with cities and states to display regional and local routes. This is why OpenCycleMap is currently the premier site for bicycle routes worldwide.

OpenCycleMap helps cyclists keep up with new routes, those being developed, and is currently the only way to view over  11,000 miles of currently designated U.S. Bicycle Routes on one map.

With so many new bike routes being developed all the time, it is becoming difficult for traditional paper maps to stay current. And though traditional paper map users might think diving into the digital mapping world is daunting, the advantages are many and it is well worth the plunge.

Next, take a look at an area you are interested in riding and see if there are any established bike routes.

These national, regional, and local bike routes have been selected by national, state and city volunteers and bicycle advocates. They have selected these routes with bicycle safety in mind on facilities with lower traffic counts, wider shoulders, or physically separated bike trails.

See this blog post for more in depth information on the types of road/trail facilities that U.S. Bicycle Routes use.

Taking your digital map with you

How do you take digital maps like OpenCycleMap with you on your tour and follow your route in real-time as you ride?

First you need a digital device that has GPS capabilities, like a smart phone or a tablet. Then you need a navigation app for your mobile device that uses OpenCycleMap as the base map.

Ride with GPS is one good option. They offer free, excellent, online mapping software that you can use with your computer or tablet to create custom routes and a free app for both Apple and Android platforms so you can follow your route while riding. This allows you to access your routes as well as routes others have created and made public. Ride with GPS is all you need for shorter, less complicated bike tours.

But now you need a way to carry your mobile device on your bike so you can follow your route. You can put it in your pocket (not ideal) or mount it on your handlebars or front bag (much better!).

Don’t be a distracted cyclist! As with any digital device, do not use while operating a moving bicycle.

Now that you’ve downloaded the Ride with GPS app and mounted your device on your bike, it’s time to practice with this new technology. Start with a ride in your own neighborhood on bike routes you know that appear on OpenCycleMap. When your Ride with GPS navigation app is turned on and the base map set to OpenCycleMap, it will find your location and put you right in the center of your map. Then, as you ride along the bike trail, the map will move under your position. Zoom in to find the right scale so you can easily see when you’re on the bicycle route … and when you aren’t! This is how you “stay found” while bike touring. Another feature: you can record your ride, if you want to.

One of the concerns with digital devices is battery life. This can be solved with a battery pack that you charge overnight and plug into your device on the road for extended travel. You can also use a front dynamo hub to help charge devices as you ride or a solar powered charger. It is important to keep the screen turned off when you are not using it to save battery power.

Mapping your own route

For those wanting to create their own cycling route, choosing a navigation application like Ride with GPS that uses OpenCycleMap as a base map option is important. The OpenCycleMap shows roads that are too small to show up on paper maps. These small roads are important to be aware of because they are alternate, low traffic options that may connect bike trails or help get you to specific locations.

In addition, OpenCycleMap shows the topography and when a custom track is created, it provides elevation profiles so you know when the big hills are coming! With software that uses OpenCycleMap, you can create your own safe and enjoyable bicycle route, just about anywhere in the world.

Creating your own custom tracks

You can use your Ride with GPS navigation app on your mobile device just as is. With the internal GPS, it will show you where you are on the map on your screen and if you set the base map to the OpenCycleMap, you will be able to follow the bike routes as you travel.

When designing and navigating a longer route that moves on and off different red, purple, and blue bike routes, it is hard to keep track of where you are going. On a paper map, you might use a yellow highlighter to draw out all the different turns you want to make. In the digital world, “tracks” are your highlighter.

Follow the directions on Ride with GPS to learn the basics of making your own tracks. 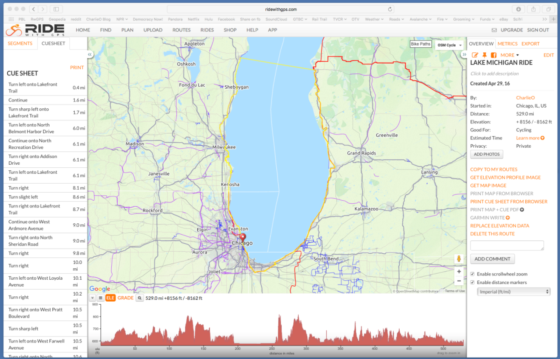 Here is a sample track in yellow, starting and ending in Chicago. It utilizes as many designated bike routes as possible and takes small, back streets where necessary to connect the bike routes.

For the longer tours, the MotionX-GPS app ($1.99) for the Apple, or something similar for an Android device, has more advanced features such as address search, downloading maps and tracks, setting waypoints, and sharing your position, which are very useful.

With the combination of new and exciting U.S. Bike Routes being developed every day and technology that makes it possible to follow these routes, it is becoming much easier to bike tour anywhere in the US or abroad. We predict that it will only take one touring experience for you to understand why it’s so very wonderful to discover the world from the seat of your bicycle. Come join us!

Is there a way to download the tracks to a GPS, such as Garmin?

You can download Open Street Maps directly to some Garmin devices and view the USBRS routes directly on the base map. The following link provides a guide on how to do so. http://www.dcrainmaker.com/2013/05/download-garmin-705800810.html

Now...if this could just be linked to CouchSurfing and WarmShowers hosts....!

I love the idea, but when do the important items of a cycling map get added? Camp sites, grocery stores, motels, post offices, police, libraries? Without these, google maps is better because you can at least do a search within your map area.

I tried riding part of the usbr35 last week with paper maps.

Great ride but too hilly

Thanks for showing us how to take OpenStreetMap data via OpenCycleMap and make it highly usable for bicycle touring, Charlie!

Great article on the landscape of digital routes and the USBRS on OpenCycleMap.

I've been following OpenCycle for awhile. Suggestions: state and city boundaries should be visible when you zoom in. (OpenCycle, by the way, works great on an iPad.) Also, highway route numbers and shields should be shown when you zoom in, and county routes too, where posted.

Also of note: the Trans-Canada Trail website at TCtrail.ca also has an interactive map, showing sections completed and open to traffic, under construction, and proposed. When you zoom in on their map, highway route numbers, as well as road names, are given. Their network is now over 80% completed now, and growing rapidly. In Quebec, the numbered Route Verte system also has TCT signs posted on those sections where the two networks coincide. (TCT routes aren't numbered otherwise.) They've got a great website, and a Facebook page as well.