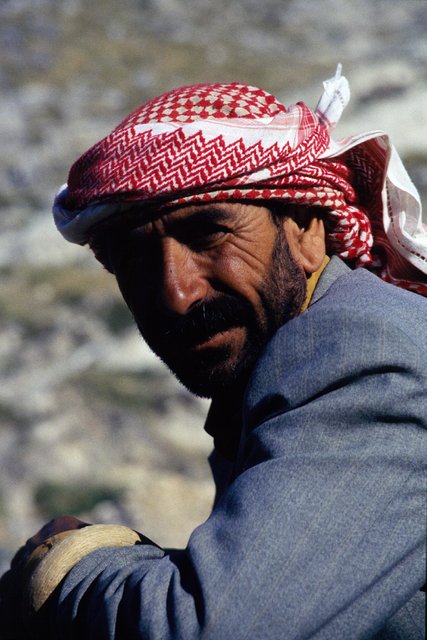 We heard the tinkling of bells, high up above our tent site in eastern Turkey. It had to be a flock of sheep or goats ... or both. But we scanned the steep mountains around us and couldn't make out anything a thousand feet above our campsite.

The night was cool and crisp. We had inquired about a hotel in a nearby town. (Some people had told us it wasn't safe to camp.) But the only hotel was run by the police and the price they were asking was astronomical. We pedaled out of town and found on old tourist site by some ancient caves. The conflict in eastern Turkey had all but dried up any tourism, and the site was abandoned.

In the morning, he appeared at our campsite. A Kurdish shepherd with his small flock of goats.

We had the camp stove running and we fixed him a cup of tea. We were quite delighted to do so because we had been the recipient of hundreds of cups of tea during our journey in one of the most hospitable countries on Earth. This was the first time we had been the hosts.

He smiled and drank our gift of tea.

But he wasn't about to leave without showing his appreciation.

He grabbed one of his largest nannies and milked her right into our small cook pot. We ended our breakfast with piping hot cups of goat's milk.

A simple exchange of kindness between two touring cyclists and a shepherd.