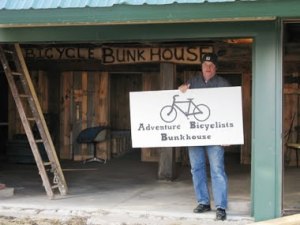 It is so good to be home and back in the saddle of routine. My recent travels through the northwest promoting our new Sierra Cascades Bicycle Route have reinvigorated me. What is not routine, but rather exciting, is news of a cyclists' only lodging that has launched an expansion of their offerings.

In 2005, Donn Olson, a farmer near Dalbo, Minnesota, encountered a couple of traveling cyclists who were dealing with a nasty batch of construction in front of his house. The three got to talking and before long, Donn found himself inviting them in for refreshments and a place to sleep for the night. The two young men introduced Donn to Adventure Cycling and suggested that he offer himself as "cyclists only lodging" option on the Northern Tier Bicycle Route map. He did, and since then has hosted a number of cyclists on their Northern Tier journey, 25 last year alone.

Over the last two years Donn and his wife, Sherry, have been converting their old barn into an "Bicycle Bunkhouse" including an outhouse and solar shower. The bunkhouse has three separate bunk rooms to accommodate more than one party at a time and is decorated with farm antiques. Donn describes the building as rough but acknowledges that "the best part is that the bicyclist can get out of the 'elements' even if it is only 'dew'." This protection extends to a space for stashing bicycles inside, too. This service is provided free of cost and is available even when Donn is away.

I love Donn's response when asked why he does this for cyclists, "My answer is that when we visit with our guests, we can live our 'dreams' through them and besides it makes us feel good to help others." Thank you Donn and Sherry for extending yourselves in this way! It makes me feel good to know about your generosity.

In this photo: Donn Olson holds the sign that greets cyclists on the highway near his house looking for his cyclists' only lodging.

My daughter and I stayed there last evening on our trip from Aitkin to Richfield mn and all I can say is Wow this place is a Cyclists dream. Don Olsen has made a place where ridder's feel comfortable and most importantly welcome. We can thank him for his hospitality and great stories.

I love hearing this news! Thanks for sharing your husband and daughter's story. Pretty cool and awesome indeed.

My husband and 16-yr old daughter are biking across Minnesota and part of Wisconsin on a double bike and spent last night at the Olson bunkhouse. They said there was one other solo biker there who was biking across the country so they had a fellow biker to trade experiences with. My daughter texted me that it was "cool", and then promptly took a nap. My husband had a little more to say which included "awesome", he sent some photos and said the fridge was stocked with items that sounded like really reasonable prices, and there was a pizza oven so they were set for the night. All in all, it sounded like a relaxing place along the trail and I think it's great that there are people willing to do things like this for bicyclists. Thanks!!