Close Encounter of the Huck Kind 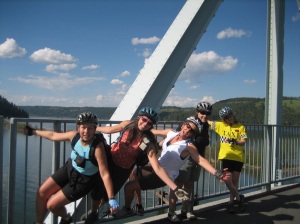 On a Saturday in mid-May, my wife Nancy and I were driving from our home in southeast Idaho to Seattle, by way of western Montana and northern Idaho. We had our road bikes with us; so, because the weather was stellar, at around 10 a.m. we pulled off I-90 at the Cataldo exit, intending to sample a stretch of the 72-mile-long Trail of the Coeur d’Alenes that I’ve heard so much about.

The trailhead was abuzz, and it was tough finding a parking space. As I maneuvered the car to squeeze into the only one I did manage to locate, I looked up to see a familiar profile. “That’s Julie!” I said to Nancy, meaning Adventure Cycling’s membership and development director, Julie Huck — whom I’ve been working with for 25 years, but don’t see all that often since we moved away from Missoula in 1995. (That’s her in the photo, second from left, bridge-swinging over Lake Coeur d’Alene.) Julie and the four other gals from Missoula, it turned out, had chosen the same weekend to do an overnight on the Trail of the Coeur d’Alenes, which, we learned, is everything I’ve heard and more — it is a fantastic rail-trail.

Later on our trip, Nancy and I had the opportunity to ride the Olympic Discovery Trail from Sequim (“Skwim”) to Port Angeles, in the state that’s ranked number-one in terms of bicycle-friendliness by the League of American Bicyclists. (For the record, Idaho is ranked mid-pack at 26th.) The Olympic Discovery Trail was a bit rougher, and a lot hillier, than the Trail of the Coeur d’Alenes, but still well worth putting our tires to. Organizers say it eventually will stretch for more than 100 miles across the Olympic Peninsula, all the way from Port Townsend to the Pacific Coast.