One of our best resources for keeping up with the ever changing conditions on our routes is the cadre of cyclists who ride them. Beginning around 2008, we started hearing rumblings that traffic was picking up on the Northern Tier route in North Dakota. In response we added a note to the addenda and moved the route off of North Dakota Highways 1804 and 23 between Williston and Minot from the west when the map was reprinted in 2009.

We later changed the Lewis & Clark Bicycle Trail to reflect this same change. ND 1804 was named as such because it follows the Corps of Discovery's journey westward in 1804. While we hated to steer people away from following the Missouri River which was Lewis & Clark's historic path, promoting safety was more important. 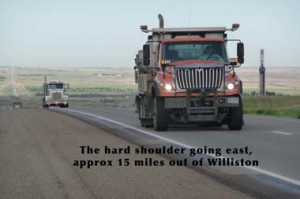 By 2010, we were regularly hearing from cyclists about how heavy the traffic was around Williston, North Dakota. Not only that, but finding a place to stay was nearly impossible. As National Public Radio reported in late 2011, not only are the roads filling up with oil rigs due to the very active drilling and fracking operations in the surrounding area, but there is pressure on camping and lodging establishments to accommodate the rapidly growing population.

We looked at maps and attempted to find ways to route cyclists onto different roads through the region. Unfortunately there aren't many options and none significantly better. In an attempt to help cyclists find places to stay overnight, some local citizens came together through the Williston Visitor and Convention Bureau to offer their homes and yards. This was much appreciated by us and those traveling through.

We did our best to document the situation in our addenda system for both routes between printings and by adding information to the Riding Conditions when maps were reprinted. 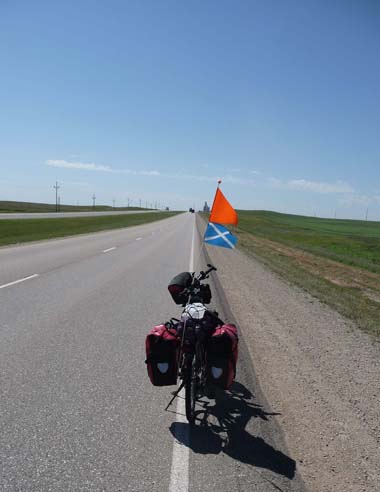 In early August 2011, we learned more about how the situation was playing out from a Northern Tier cyclist, Graham of Sleepless Til Seattle. He sent me pictures and the this video highlighting the conditions.

I shared these sobering images with my Routes & Maps colleagues and we made a decision: it was time to do a major reroute.

We outlined some possibilities but before we dispatched a researcher, we checked in with Ben Kubischta, North Dakota's Bicycle and Pedestrian Coordinator. We wanted his perspective on the situation and any recommendations he might have as to where to route cyclists across his state. He confirmed for us that on our current route — mostly U.S. Highway 2 — no plans were in the works to add lanes or increase shoulders on the 25 mile stretch with an 8 in. shoulder - adding these facilities could increase safety for cyclists. His suggestion was to move the route south and follow the Interstate 94 corridor which is essentially what our researcher brought back to us.

We juggled some items in our budget, both money and time-related, so we could send our researcher out quickly and slip all four of these map sections into slots for the very next map printing. They will be available for sale in May.

Due to the circumstances surrounding this reroute, our Sales Department pulled the existing inventory and stopped selling the affected map sections — Northern Tier 3, Northern Tier 4, Lewis & Clark 3, and Lewis & Clark 4 — and a map replacement policy is being established. If a route needs to be changed and republished due to reported safety issues, Adventure Cycling offers the following map replacement policy:

There could potentially be over 500 cyclists affected by this map replacement policy so please be patient with the Sales Department as they handle the influx of requests alongside their usual duties.

Though we are saddened to be making such a major route change to two of our most well known routes — pulling some business from small towns in North Dakota — we made this decision based on the safety of cyclists and we hope our decision is met with patience and understanding.

The costs associated with this reprint, from Routes & Mapping time and research money, to discarding inventory, is outside of our normal operating budget but we believe the issue of cyclists' safety takes precedence. If you would like to help us defray the costs of this reroute, make a donation today. Every little bit helps. Thank you for your support.

Both photos by Graham Kitchener.

Has anyone looked at gravel tires across the state?

I am a longtime member and I plan to do the Northern Tier again this coming summer (2017). Can I purchase the completely updated maps now, or are there more revisions planed soon?

I think you're fine to purchase your maps now for a summer 2017 trip. Be sure to check the addenda and forums before you go for any last minute additions.

Have a great trip!

Thank you. Do you happen to know when the Northern Tier maps plan to be reprinted with all pertinent updated info?

The changes outlined in the blog post above occurred in 2012. The maps you purchase now are the most up to date that will be available for your trip this summer.

I plan on doing the Northern tier 2016 start May, are maps ready for purchase now?

Has anyone looked at gravel tires across the state?

Do you mean gravel routes in North Dakota? We haven't researched this but there seems to be a good resource at the North Dakota Parks and Recreation website:

You can find the map they reference here:

The route changes to these maps were made in 2012 and are now available for purchase.