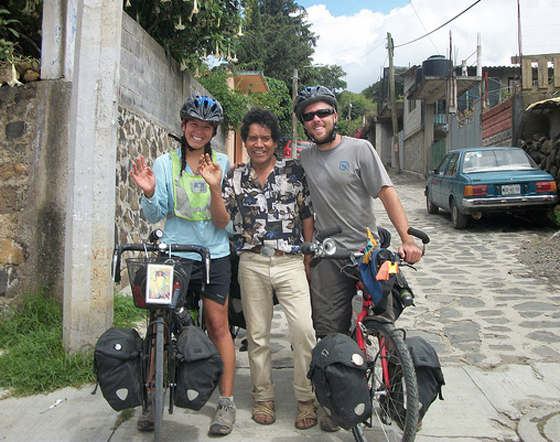 While I am aware of Couchsurfing.org, another online resource for travelers, in this series I purposely chose to address the Warmshowers.org community as well as spontaneous meetings of strangers on the road.

Both Warmshowers and Couchsurfing serve an adventurous group of people — those wishing to travel the world far and wide. They facilitate a connection between people for hospitality's sake.

The main difference between the two groups is that Warmshowers is a network of bicycle travels exclusively. As such, this made Warmshowers the more straightforward choice as a focus in the series.

When I began writing about Bicycle Travel Etiquette issues in December 2012, I wasn't sure exactly why the conflicts might be arising. Since then I have come to think some of it emerges from the intersection of younger and older crowds. It could be that the difference in life experiences of these two groups leads to misunderstandings about what is "common sense" etiquette. (This is a generalization and I know there are counter-examples.) My hope in creating some How To's as guides was that they could ease that difference and increase the odds of everyone coming out of the deal feeling good.

And whether this is true or not, the impression many people have of the Couchsurfing community is that it tends to attract a younger crowd and thus fewer (or different) conflicts arise. This is not based on any scientific evidence and certainly, Warmshowers has its fair share of the under-30 crowd, too.

I would encourage you to tap into either one or both of these communities when planning your next bike trip. Because as longtime Warmshowers registrar Randy Fay says, "the bottom line is that the thing that makes Warmshowers beautiful is the same thing that makes Couchsurfing beautiful — it's the amazing people who against all odds share hospitality, which is completely incomprehensible. It totally goes against everything we read in the paper!"

The last group I mentioned earlier, where the bond is born of an invitation from an unplanned encounter, ages of all participants can vary widely. This often happens based on a connection made face to face and guides seem less necessary in this instance. However, if either party wishes to create more of these experiences, a reading of the How To's may aid in this process.

In the end, the guides compiled are mirrors of each other that simply view the same situation from different perches. We have created a Bicycle Travel Etiquette page in our How To department with links to each of these posts for your reference. If you have suggestions of other pieces that would be helpful to include, let us know. 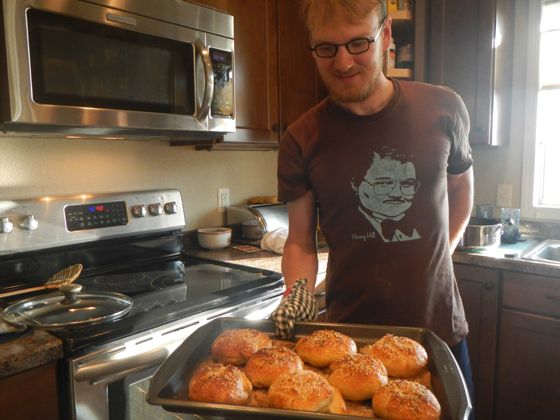 I want to thank all the hosts and guests who participated in the conversations on this topic. Your contribution helped form our two How To guides into a helpful reference for hosts and guests. There are some good stories and advice in the comment threads of the blog posts. I'd love for the conversation to continue so if you have something to add, please do!

Photo 1: Saying adios to a gracious host, Tomas, in Tepetlixpa, Mexico after working with him on his farm for six weeks. Photo from wegoslowly's Flickr photostream.

Photo 2: Adam likes to say 'thanks' to his hosts by baking them bagels. Photo by Crystal Bae.

We usually have two to three bikers a year stop in at our house as we are on a direct line from Maine to Florida. It has always been a wonderful experience. The people are polite, gracious and have many adventures to share. We usually get a post card back when they reach their goal. I look forward to the people who are yet to come.

While we haven't hosted that many different riders, Those who have stayed with us have been exceptionally gracious, grateful and rewarding. It always bolsters my faith in humanity.

Great story, Katie! Thanks for sharing it. Being on the TransAm, I'm sure you saw a great variety of people passing through.

I cherish the Journal I keep of photos, postcards and comments from Warmshowers guests over the years. We used to live in Granby, CO, right on the TranAm trail and before Trail Ridge Road, over the Continental Divide, so folks were ready for some R and R in the mountains. We asked two Dutch riders going around the world, who were the friendliest and they answered "U.S. and Syria."