Interbike — North America’s largest cycling tradeshow — flung open its doors to the public for the first time this year, allowing cycling enthusiasts into the hallowed halls for just $10 a head on the final day of last week’s show. Adventure Cycling Association staff members were on hand to man the booth, meet with our many partners and supporters in the industry and, of course, check out the latest and the greatest in the cycling world. Plenty of past, current, and (we hope) future members stopped by the booth in the Mandalay Bay, but in case you weren’t able to take off work and head to Vegas, here’s a sampling of some of the touring gear that will show up soon at a shop near you. 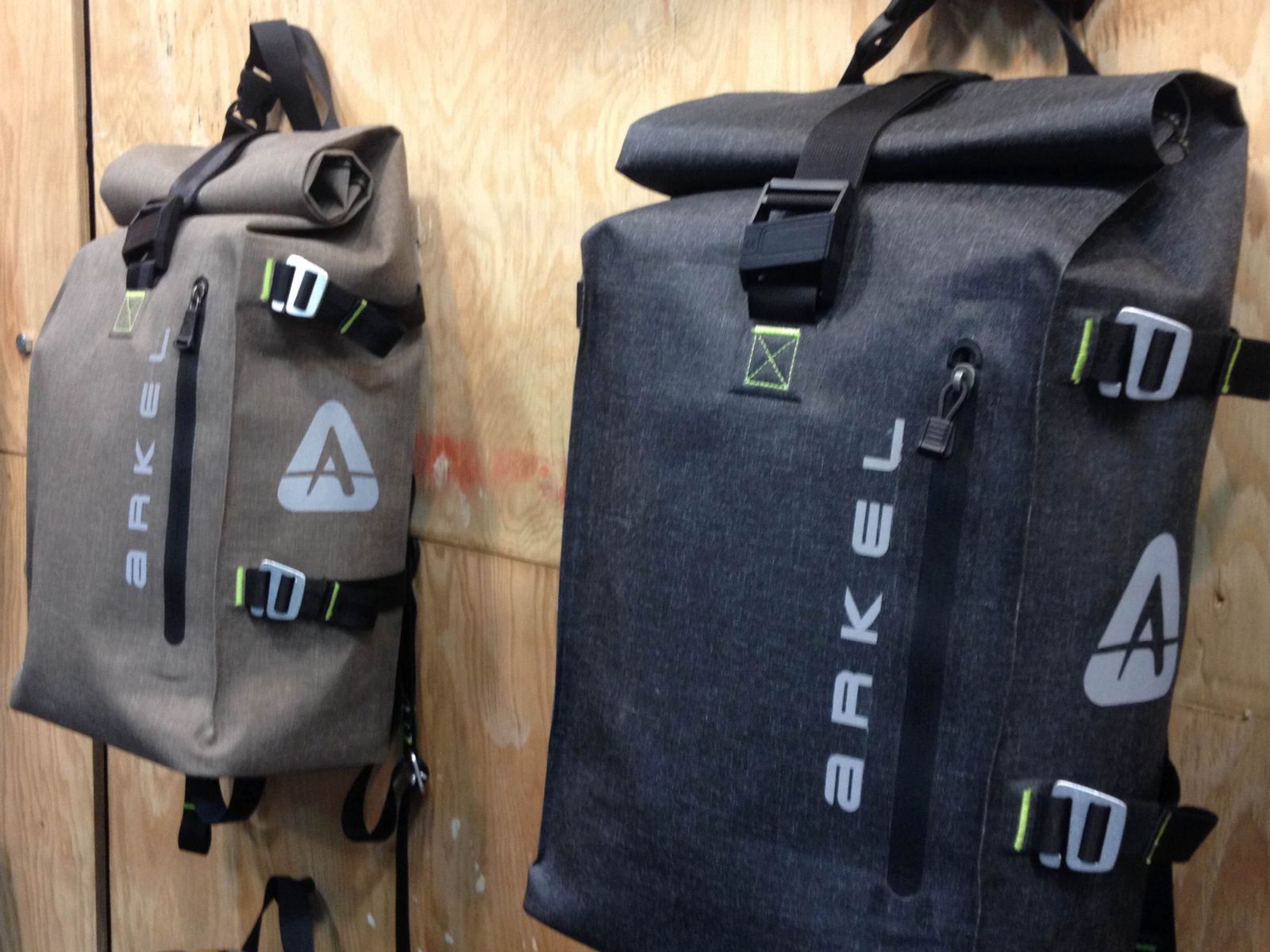 Much-loved pannier-maker Arkel was showing off slick new bags for commuters and bike travelers at the show — in fact their randonneur-rack-compatible backpack was so stylish a group of Adventure Cycling staff practically snapped their necks spinning to look at one during an industry gathering as it slid by on someone’s back the night before the show began. The company’s classy gray and brown heathered options are waterproof, look great, and feature a clever closure system that uses magnets to make lining up the buckles a snap. New panniers called the Orca were as sleek as their killer whale-inspired name suggests and Adventure Cyclist testers are looking forward to putting them through the paces in our forthcoming pannier roundup in 2015. 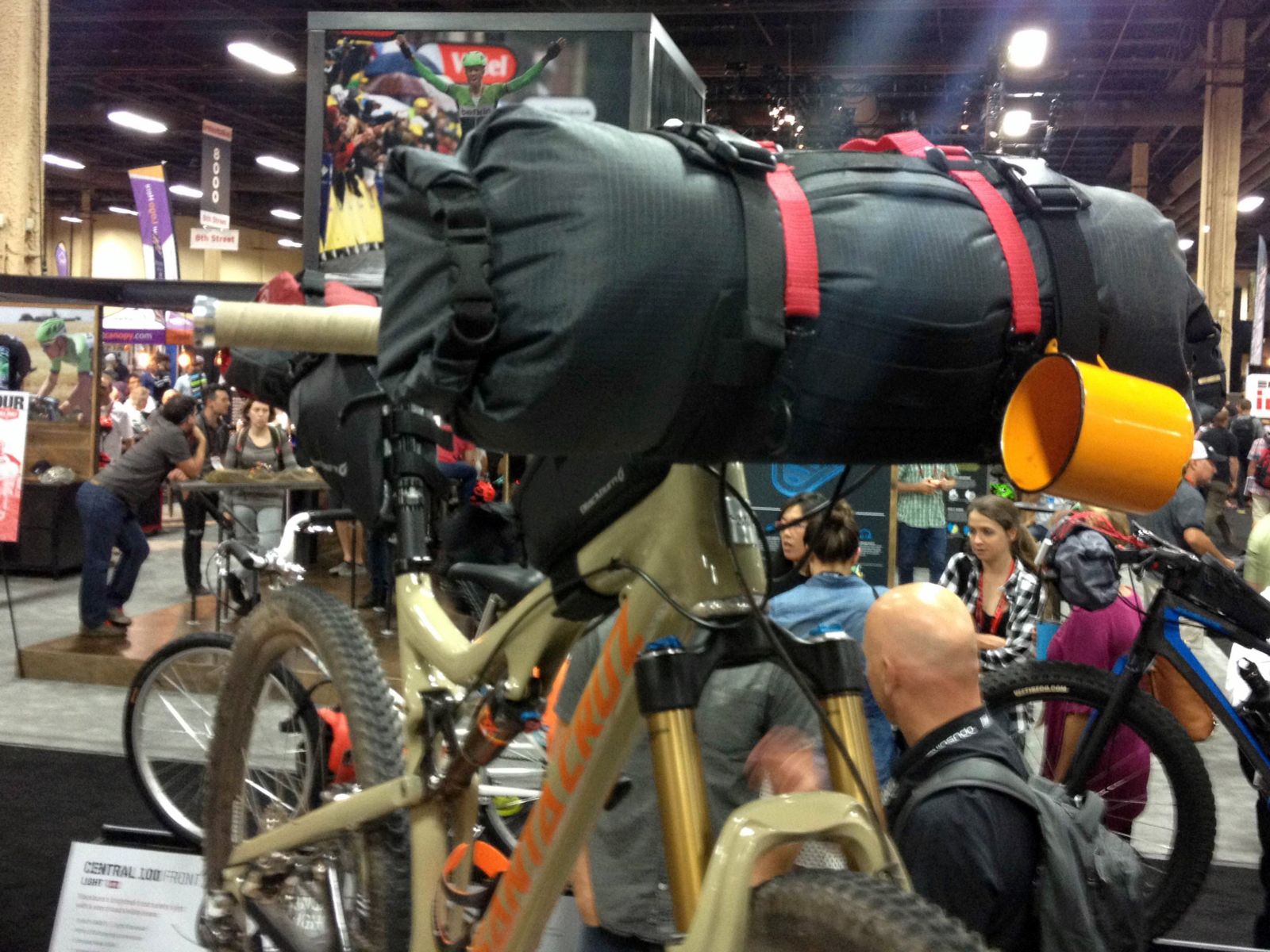 Blackburn’s commitment to touring and bikepacking was on full display at Interbike, with Brand Manager Robin Sansom’s personal Santa Cruz 5010 mountain bike kitted out with the latest bikepacking bags front and center in the booth alongside an impressively large bear box that completed the booth’s campground motif. The handlebar, top tube, and seat bags are made from a water resistant and seemingly extremely burly fabric built to take a Great Divide Route’s worth of abuse. Showing off their lighter side (on display via their Bike Rangers' instagram accounts), the Blackburn folks had a CNC’d holster mounted to a FOX D.O.S.S. dropper post built for the express purpose of crushing beer cans. They assure us this will not be a production item, despite some unseemly begging. 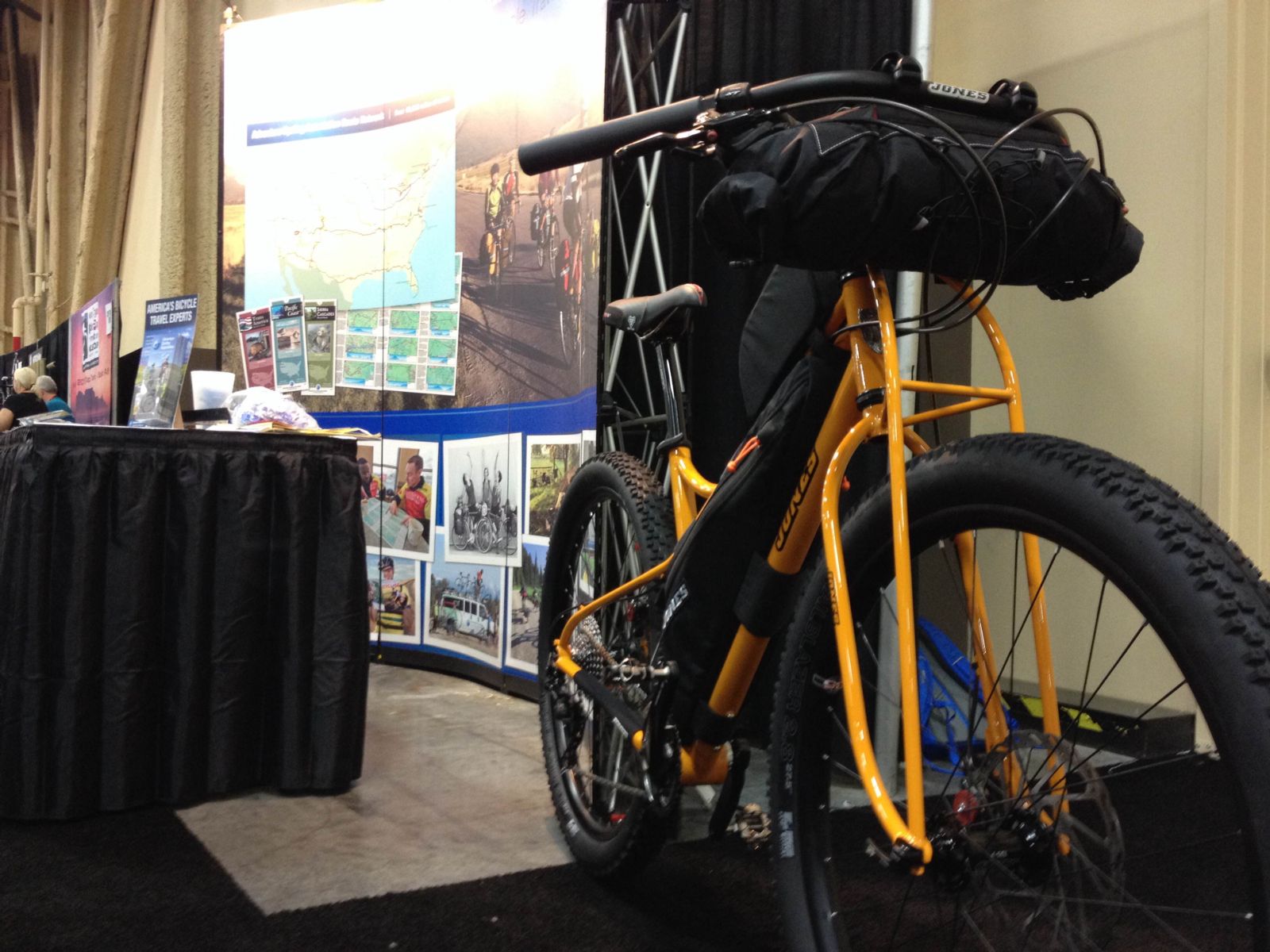 Last year, Adventure Cyclist’s Patrick O’Grady tested out a Jones bike and liked it so well he bought it. We can’t say we blame him. After spending time with the brand’s founder Jeff Jones and having him leave a few models at the Adventure Cycling booth during the show, we’re smitten too. Jones has always swam against the bicycle industry current, eschewing suspension forks and preaching the gospel of large tires and low pressure long before it came into vogue. While he showed off the diamond frame model O’Grady so loved and a new 29+ bike with a crazy-long wheelbase ideal for touring, Jones is best known for his swooping spaceframe designs, and it was the yellow show-stopper he dropped off at our booth that had people drooling in the aisle. Complete with custom bikepacking bags, 2.7” tires, and curves that would make Highway 1 jealous, if the spaceframe and truss fork don’t raise your heart rate a bit you might want to consider just walking. 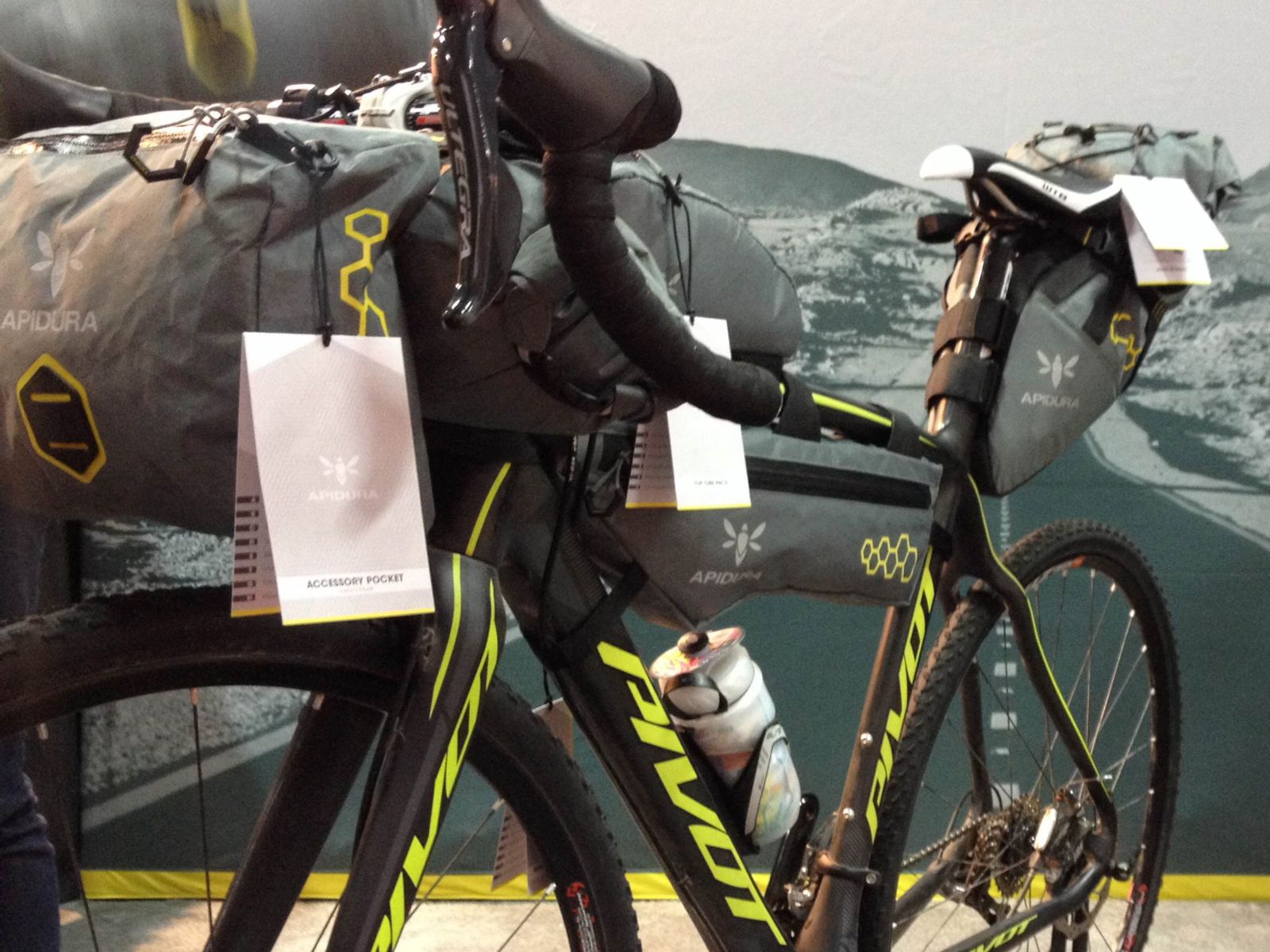 Bikepacking has officially arrived at Interbike, with framebag-equipped bikes on display not just in the niche-y corners of the show, but in prominent spots with heavyweights like WTB and Maxxis (who had gorgeous Soulcraft and Chumba bikes in their booths, respectively). One set that caught our eye was the ultralight and, it must be said, very cool-looking bags from Apidura. The British bikepacking bag-maker is featured prominently in the new film about the TransAm Bike Race, Inspired to Ride, because the bags were used by 2014 winner Mike Hall. Not cheap, but extremely clever, these bags use a lightweight material called Dimension Polyant VX2, which feels a bit like a cross between cordura and sailcloth and have thoughtful features like multiple light attachment points on the seatbag to accommodate changing load sizes. 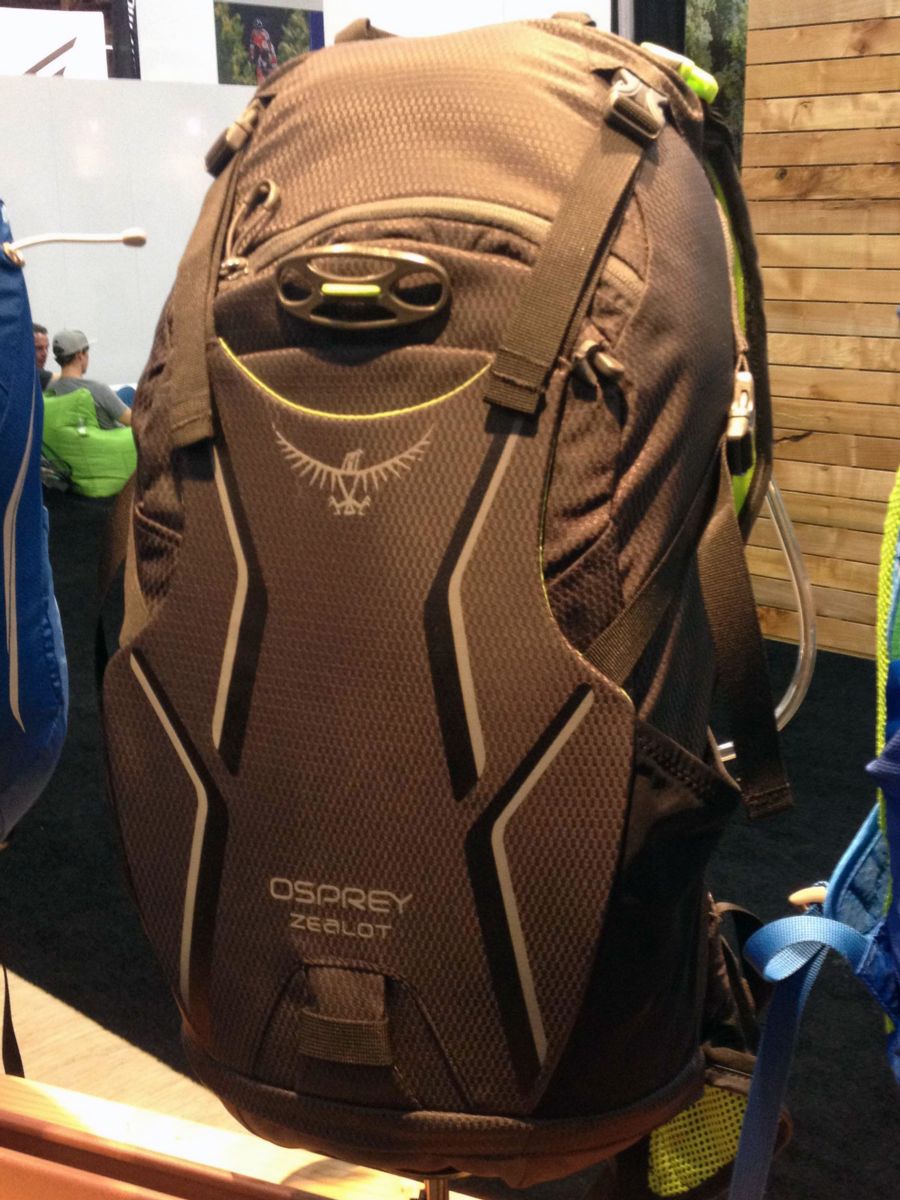 Osprey’s selection of backpacks runs the gamut from tiny race-day-only grab bags to kitchen-sink-carrying behemoths, all with the company’s attention to detail and blessedly trouble-free hydration bladders. But it was the medium-sized Zealot that caught our eye thanks to a few unique features. First, Osprey’s helmet attachment system is so simple and well-functioning it should be standard on all backpacks in the world. Just pop it through a vent and your helmet is securely attached and out of the way when off the bike. Second, a roll-out tool sleeve hidden away in the bottom compartment would make road or trailside repairs quick and well-organized and avoid the obligatory rummaging that usually accompanies a hex wrench search. 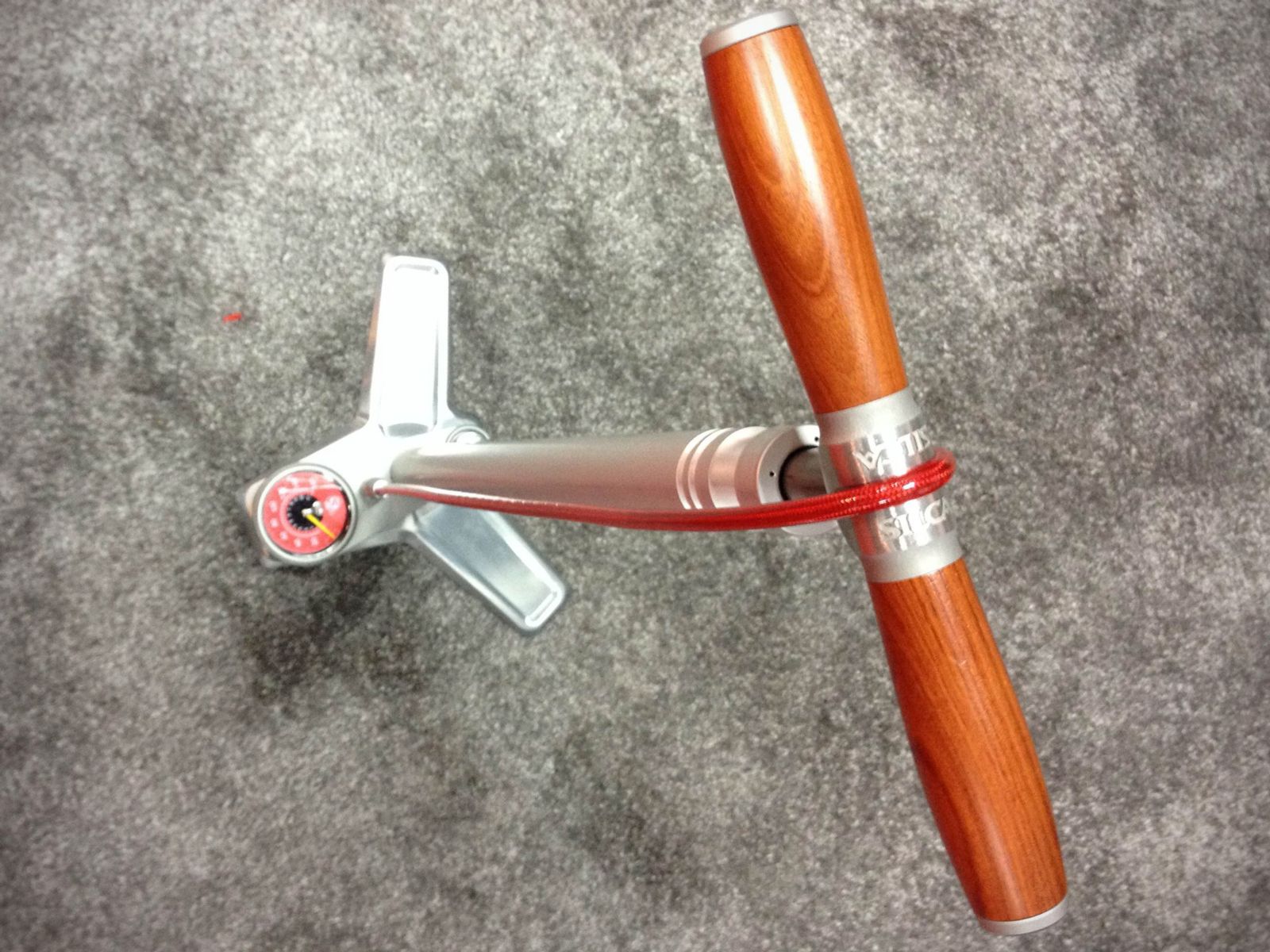 OK, this a splurge. Maybe THE splurge. You might be able to justify a $6,000 custom touring bike with titanium, couplers, a belt drive, and the whole shebang. But a $450 floor pump? That’s ridiculous. Or at least that’s what I thought before I used it, now I’m pondering breaking open the piggy bank. The Silca SuperPista Ultimate is a piece of art, plain and simple. Rosewood handle, Teflon-infused hard-anodized shaft (similar to the stanchion on a high-end suspension fork), and, in a nod to their heritage, a leather washer to move the air, all built with an attention to detail that boggles the mind. As Silca President Josh Poertner detailed how they chose a particular knurling for the touch points, he told us that on the first day of the show, Chris King — yes, that Chris King — showed up at the booth peeling off hundred dollar bills to buy one for himself. The pair bonded over their shared love of a certain type of stainless steel and, yes, knurling, and Poertner called it “a highlight of my career.” And we can’t believe we're typing it, but a floor pump — that beautiful, elegant, incredibly expensive floor pump — was the highlight of Interbike.

Want to read more of our gear reviews? Check out the Adventure Cyclist section of our website.

For me the highlight of Interbike was Old Man Mountain's chainsaw carrier. Channing of OMM also has new brackets which will attach to his racks for carrying anything from hunting weapons to trail maintenance tools. Truly useful stuff!