Action-Packed Days on the Intro to Road Touring Course 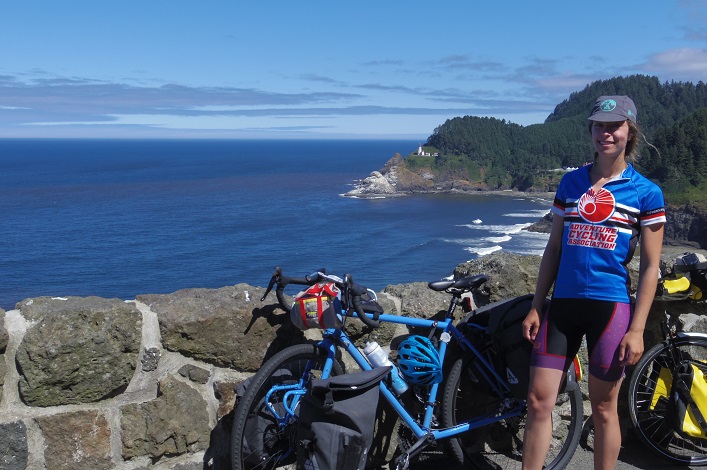 Sara Chars, one of the recipients of the 2017 Greg Siple Award for Young Adult Bicycle Travel, completed the Intro to Road Touring course in Eugene, Oregon, July 23–28. Check out her experience and gorgeous photos below.

Sara, what were your overall impressions of the Intro to Road Touring course? 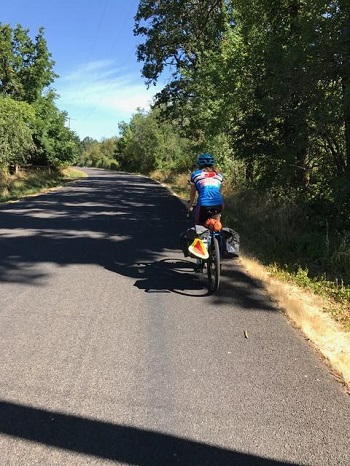 It provided a great foundation of knowledge as well as on-the-bike experience. The combined discussion and hands-on aspect offered a truly realistic insight to preparing for and embarking on your own adventure. The six-day length of the course was a very reasonable amount of time, and the allocated number of training and riding days was optimal — an evening to settle in, one day of training, and the following day we hit the road. Our group had 19 people total, which was on the larger side, but once we started riding, everyone naturally spread out in terms of pace. The timing and structure of this intro course was a great fit for me.

The training day was full of new and useful information and was spread out nicely throughout the day so it did not feel overwhelming. I learned about touring bikes, how to pack panniers, weight distribution, necessary bike maintenance checks, navigating with maps, inclement weather, preparing meals, and more. Our two tour leaders also provided many tips of wisdom from their extensive touring backgrounds. Once riding, I learned by making mistakes along the way and taking mental notes. In these moments, I was thankful for the support of my fellow group cyclists who were there to listen or lend a hand. 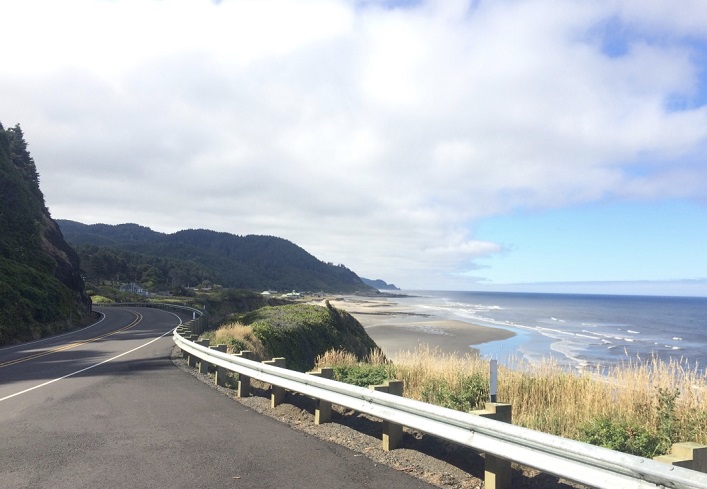 What did you enjoy the most? 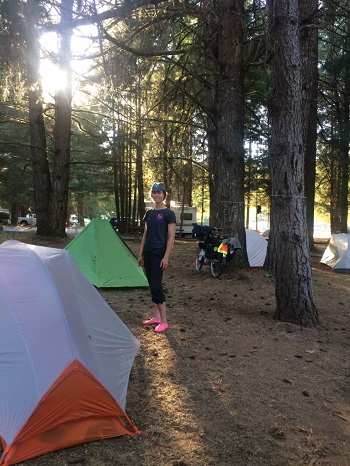 Two things: One was riding self-supported — carrying everything I needed was empowering. Choosing this way of travel allows for more flexibility and spontaneity with the caveat of full responsibility. It was liberating to see how little we need in terms of material possessions, but also how important our basic needs are — food, safety, physiological. While engaging in a rudimentary activity at its core, I noticed self-actualization prevail. I became much more aware of my physical body, observant of time, and very attuned to my own thoughts. It’s as much mental as it is physical and I enjoyed the challenge in both of these ways.

The other was scenery. The riding days included beautiful and diverse landscapes changing from backcountry roads lined with wild blueberries, cycling through the Siuslaw National Forrest to the coastline of Highway 1, and then looping back. For the most part our route was alongside water and through forests with all sorts of wildlife. I even saw a mountain lion come down from the brush, stare at me from 15 feet away, and luckily, go on his way! 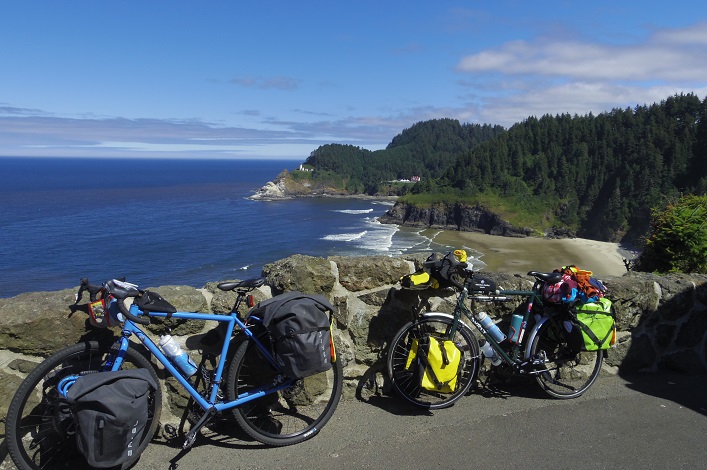 What did you find most challenging?

Being a bike commuter, I am fairly well accustomed to navigating city streets. I wasn’t thinking “intro to road touring” would be all that different, but I got a quick reality check on our grocery run ride the afternoon before our first riding day. It was a hot afternoon with the sun beating down and I still wasn’t feeling completely organized with my gear. The ride was optional, but everyone seemed to be going and I wanted to get on my bike at least once that day. So I scrambled to make the ride not yet having attached my helmet mirror, which I was still uncertain whether I’d even use. 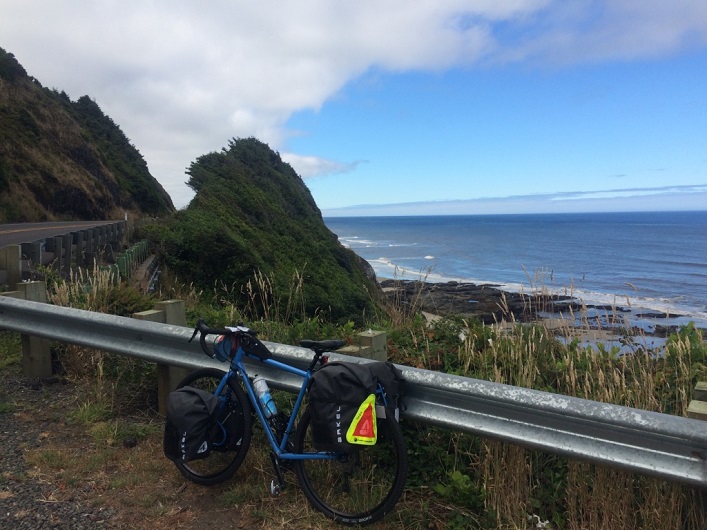 Looking back, I’m glad I went on this short jaunt as it was in those 10 to 15 minutes of feeling completely uncomfortable that I learned a few big lessons. There was no shoulder on this road and each car that passed from behind I couldn’t see, or sometimes even hear. Lesson learned: a helmet mirror is super useful and put me at ease by anticipating the cars behind me.

Although we tried to stagger our departure due to having a large group, we quickly conglomerated which caused cars to back up, and that was no good. Lesson learned: spread out! Ride in smaller groups of two or three people with large gaps in between. I also decided that I was going to leave as early as possible each morning to avoid the afternoon heat, higher winds, and more traffic. 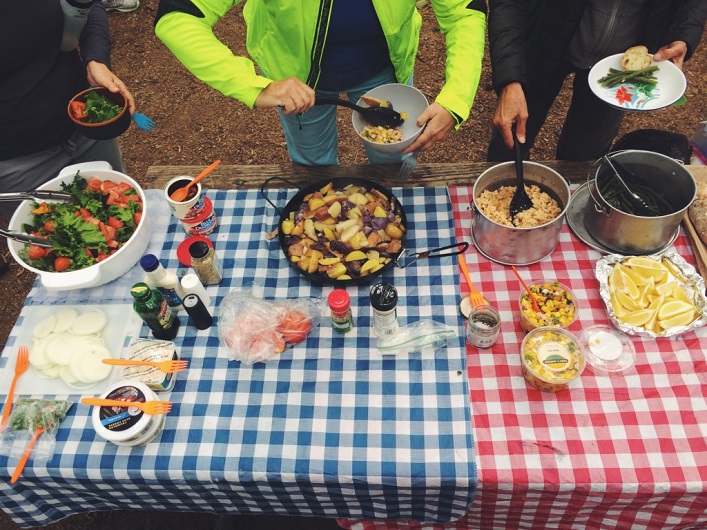 Although I left early each ride day, it was surprising to me that the days became so full and there was less down time than I anticipated. Each morning, we were tearing down camp and each evening shopping, preparing food, setting up camp, showering, meeting to review maps, and before you knew it, it was dark and you were ready for bed. I think most of us agreed that the days people had to cook and clean were the most stressful because it was an extra added element. 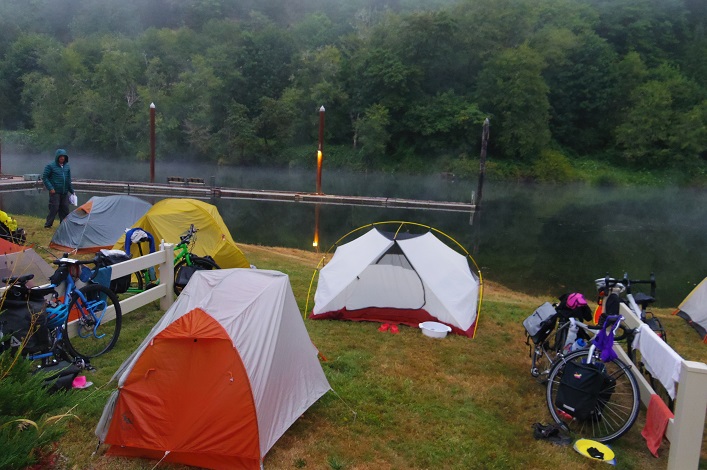 How do you see yourself using the skills you learned?

Timing is a powerful thing in life that one could say everything else revolves around. This intro to touring course gave me the resources to bridge a gap between something I recognized I was interested in and gaining firsthand experience. This translates to only the best kind of understanding, the kind of real world knowledge you want to share with others. 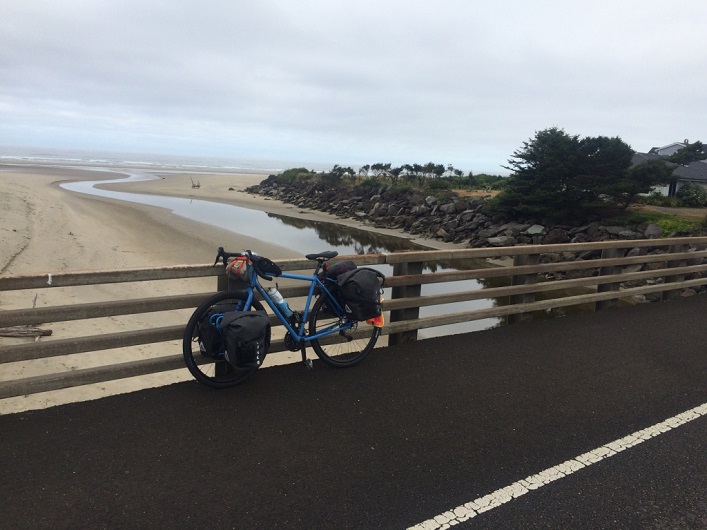 Later this year I plan to share the skills I’ve learned with the everyday commuter cyclists, giving them the opportunity to try out panniers. I will hold a pannier-making workshop at a local bike shop weeks prior to Minneapolis’ annual Cranksgiving, alley-cat ride, where we will bike around the city collecting Thanksgiving food into our new panniers to be donated to an area food shelf. My goal is to have this experience inspire cyclists to see how they can incorporate using their bicycle, and panniers, to complete daily tasks. 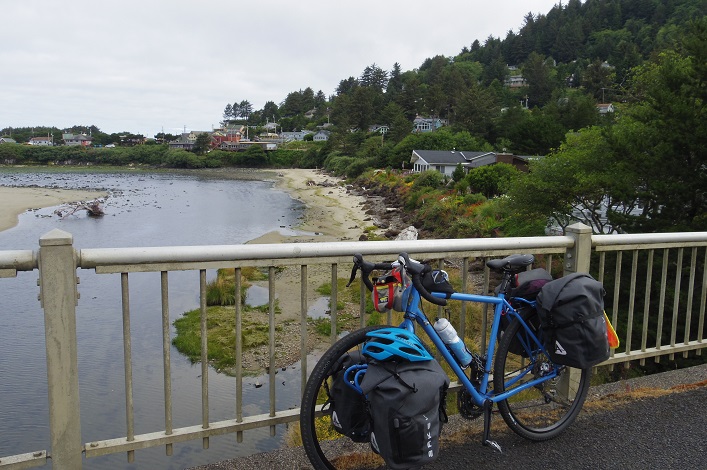 In spring of 2018, I plan to embark on a two-week solo tour along part of The Great Trail across Canada. This introductory touring experience reassured a few of the uncertainties I had about my upcoming trip, including total duration, daily mileage, rest days, pannier weight distribution, and the companion versus solo pros and cons. Many of the tweaks I’ve been making over the past months have been confirmed after the completion of this intro course.

I’d like to give a huge thank you to Adventure Cycling for this opportunity. The timing could not have been better.

It was a great ride wasn't it. I enjoyed meeting you and everyone too. I learned some things on tour this as well. Trying to plan my next tour, so many options.

Your pictures are so beautiful they almost don't look real. Glad it was a valuable experience. Thanks for sharing your knowledge with others!

Great inspirational story to motivate others to go after such endeavors and learn new skills in outdoor play and exploration!