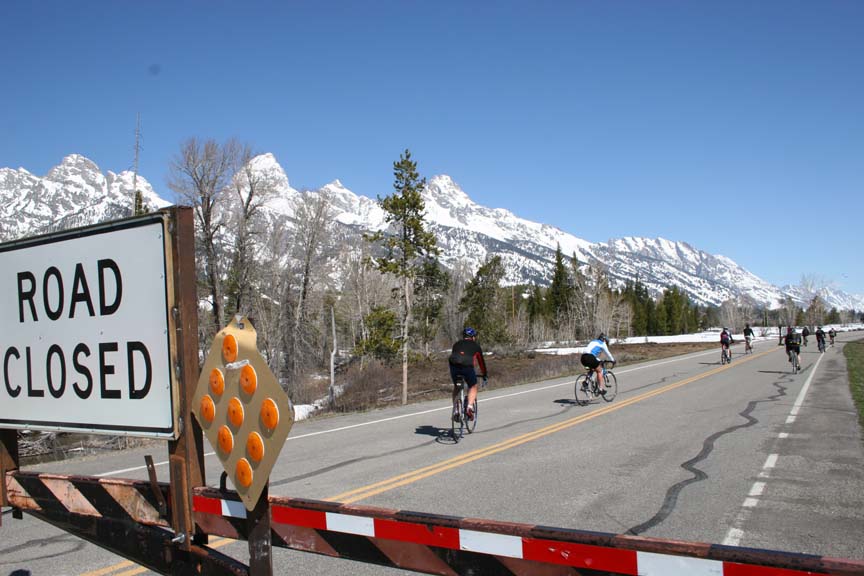 Earlier this month, the first eight miles of a planned system of more than 40 miles of separated bicycle and pedestrian pathways (and enhanced road shoulders) opened in Grand Teton National Park. The completed stretch of pathway connects the Craig Thomas Discovery and Visitor Center at Moose with the bustling south Jenny Lake area.

The original big push for the creation of this network of pathways was ignited by the tragic death of 13-year-old Gabriella Axelrad, who was hit and killed by the driver of van in Grand Teton National Park in July 1999.

This is going to be an incredible addition to the park, and a boon to getting visitors out of their cars and into the great outdoors on their feet and their bicycles. No longer will cyclists have to wait until April (as shown in the photo above), after the snow melts and before the Teton Park Road opens to motorized vehicles on May 1, to enjoy a car-free ride alongside the magnificent Teton Range.

It is my sincere hope that as more and more members of the public discover the joys of cycling in Grand Teton, they will be inspired to pressure the national park to the north, Yellowstone, to begin building a network of road shoulders and bicycle paths. That park administration's acceptance and encouragement of cycling over the years has been lukewarm at best. I could tell you stories. How about you—have you ever bicycled in Yellowstone? What was your experience?