Georgia designated U.S. Bicycle Route 21 (USBR 21) in the fall of 2015. It runs north from Atlanta to Chattanooga, Tennessee, and about a third of this 160-mile route includes part of one of the South’s bike-travel gems: the Silver Comet Trail. Guest blogger Paul Mulvey was one of the first cycle tourists to ride USBR 21 and shares 10 highlights he found on his ride. You can view an excellent Google Map of USBR 21 here, along with its three spurs: USBR 321, 521, and 621. 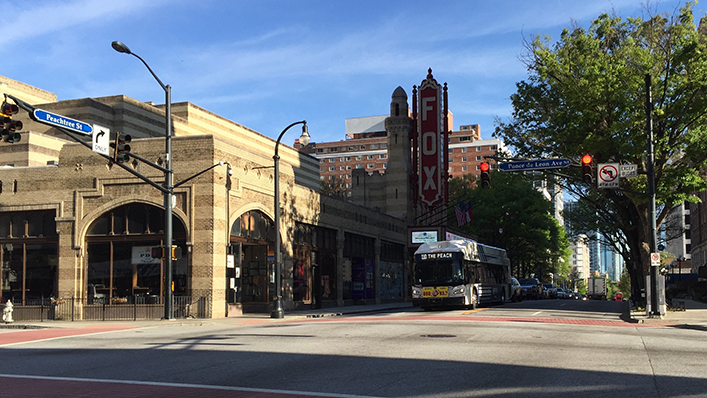 The first three miles on USBR 21 take you from downtown Atlanta through midtown on Peachtree Street following an established bike lane. And for those of you who think every road in Atlanta is named “Peachtree,” no, it’s only about a third of them!

On Peachtree Street, you’ll pass sights such as the Fox Theatre, above, a movie-house built in 1929 showing Disney’s “Steamboat Willie” on its Christmas-day opening cinema, the Margaret Mitchell House, where Peggy Marsh wrote “Gone With the Wind,” and the Center for Puppetry Arts — the largest American nonprofit organization solely dedicated to the art of puppet theater. They opened their doors in 1978 with a ribbon cutting by none other than Kermit the Frog. It is unknown if Miss Piggy tried to steal the spotlight away from Kermit during the ceremony.

Tours of all three sights are available. 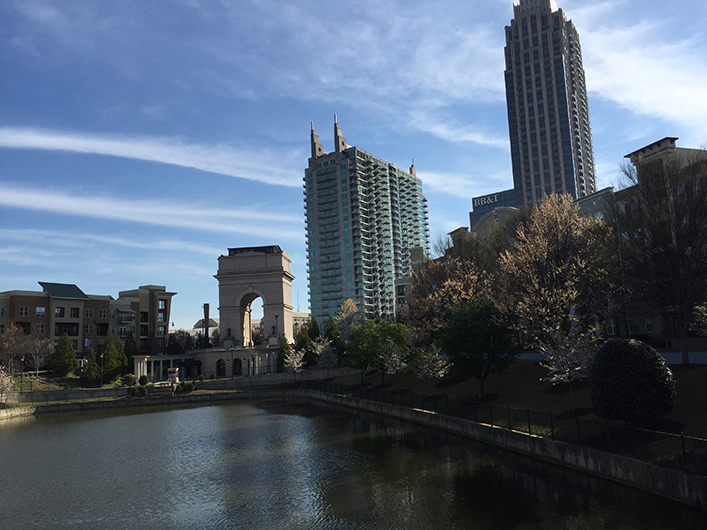 You’ll spot this arch, the Millenium Gate, as you cycle through Atlantic Station, 4.5 miles into the trip. The Millenium Gate was constructed in 2011 and is the largest classical monument to be constructed since the Jefferson Memorial in Washington, DC. The Millennium Gate is reminiscent of the Arc de Triomphe in Paris and houses a museum inside. One of the most famous pieces in its collection are the Bodmer Papyri XIV-XV, known as P75, which contain the oldest known written gospels of Luke and John. There are also plenty of exhibits showing off artifacts telling the history of Atlanta.

Atlantic Station is a brownfields project, former site of the Atlantic Steel Company, and now home to retail and food service shops. Old steel mill equipment has been repurposed in the parks and green spaces along 17th St. If you detour through Atlantic Station, you’ll feel as though you’re riding through a small, multi-block city center, but in fact the entire complex is built over a multi-level parking garage!

As you make your way through the metro area, you may be interested in a hidden site behind the Kroger Grocery at 4715 Atlanta Rd. Trolley Line Park is a small, two-block long, linear park designating the trolley line that used to run between Atlanta and Marietta. It’s paved with bricks, rideable, and contains interpretive history signs about the route. 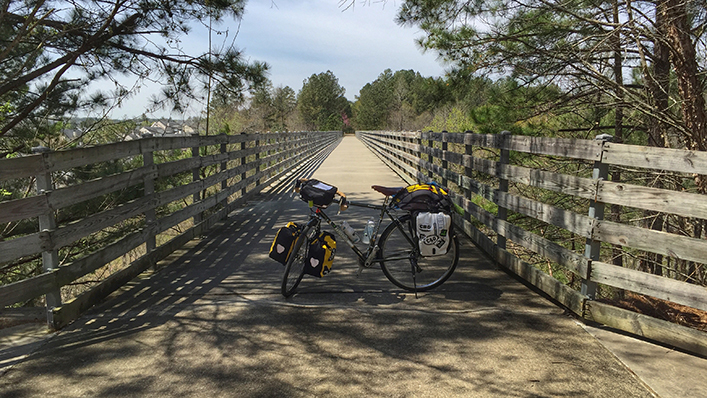 After 12.5 miles of riding, you’ll roll onto the Silver Comet Trail. It’s not hard to get used to the carless experience, and you’ll enjoy it for about 53 miles until reaching Cedartown. This trail was the former rail line of the Silver Comet train service from Atlanta to Birmingham which began in 1947 and owing to declining ridership, ceased operations in 1969. The rail line was then used for freight traffic until 1988, then sat abandoned until 1998 when construction began to pave the entire length. In 1999, it opened to the public.

One of the big highlights along the trail comes 37 miles into the journey — the Pumpkinville Trestle. This trestle was built in 1901 and traverses 750 feet across Pumpkinville Creek at a height of 126 feet. The fact that you can experience it only on a cycling path is an even bigger bonus. 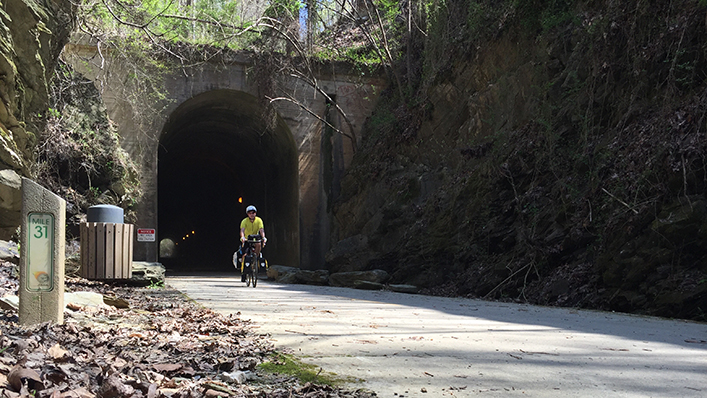 Once past the Pumpkinville Trestle, you’ll pass into one of the most remote parts of the Silver Comet Trail as you pass through the 25,000 acre Paulding Wildlife Management Area. Within this management area, around 44 miles into the trip, you’ll pass under Brushy Mountain through the 800-foot Brushy Mountain Tunnel. This tunnel was originally constructed in 1912, and raised to its current three-story height in 1968 — you can see how tall it is in the picture — to accommodate modern three-tiered freight cars. The interior is dimly lit throughout its length, so no need for a headlamp. It’s also nice and cool inside ... a nice benefit during a hot summer day.

At 51 miles, you’ll pass through Rockmart which is a good detour for the grocery store at 1100 Nathan Dean Bypass, especially if you plan to overnight at Camp Comet, the trail’s only campground along its length — around 58 miles into the trip and my overnight for day one. Camp Comet is very primitive: no picnic tables, no toilet, no shower, and no water. Bring a water filter to use in the small creek flowing through the campground, if necessary. 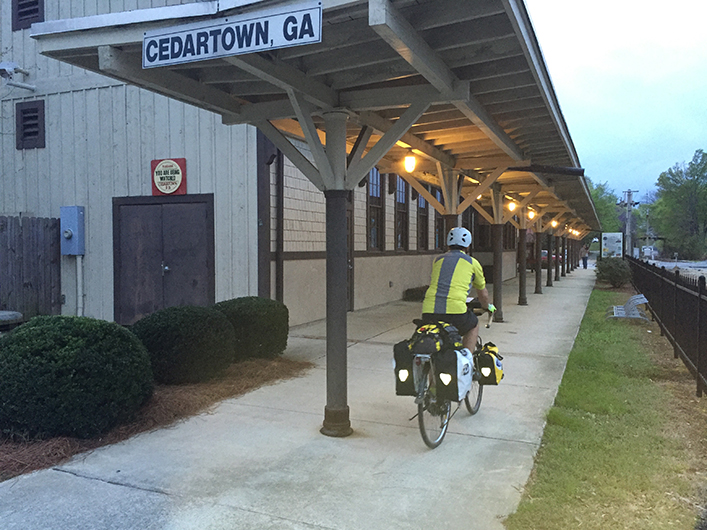 If you overnight at Camp Comet, be prepared for the climbs that come in the six miles between the camp and Cedartown. Normally, rail trails are relatively flat, since trains cannot climb steep grades. But here, the trail departs from the railroad because this section of the rail is still active for freight service. So, the trail continues next to the railroad right-of-way. At 65 miles, you’ll roll through the Cedartown Depot, a train station converted to a welcome center. Cedartown has complete services — food, water, and lodging if you desire. At the depot, USBR 21 turns north and heads through town on Main St., a designated historic district due to its 1890s architecture.

Around 73 miles into the trip, you’ll pass by the first indication you are on the “Trail of Tears.” This route with historical markers denotes the series of forced removal of Native Americans from this area during the 1830s. 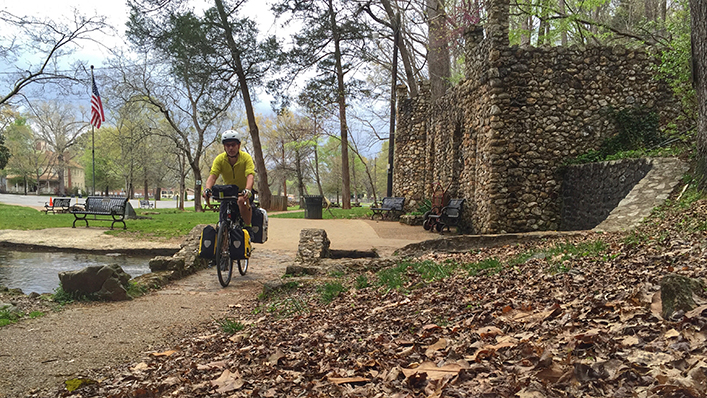 75 miles into the trek brings you through Cave Spring. Detour off the road through Rolator Park to experience the spring that gives the town its name. The cave is known for its stalagmites, and mostly for the “Devil’s Stool” formation. Fill up your water bottles at the spring since the water has exceptional purity and best of all, it’s cold! The spring water flows out of the spring into a pool loosely formed in the state of Georgia. Cave Spring also contains a library if you need wifi or just want to get out of the heat.

I took a detour off the official route to overnight at James H. “Sloppy” Floyd State Park. Good choice! Hiking trails abound through the park, the most significant being the Marble Mine Trail whose final destination has you walking underneath a dripping waterfall. 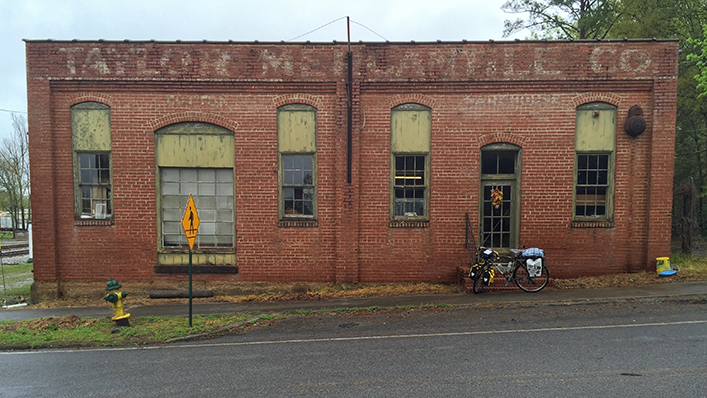 Mile 108 has you enter the town of Summerville, the county seat of Chatooga County. You’ll be able to explore railroad history at the Summerville depot, and if you’re lucky enough, see the railroad turntable in operation (turns around a steam engine on the rail line). Summerville has preserved several of their buildings including the Couey House, an original log cabin from one of the early families in the area, an old school house, and the depot train station. They have also repurposed many of their downtown buildings giving it a 1950s-60s flair, almost like you stepped back in time. You’ll find many services in the town, including groceries and eateries. 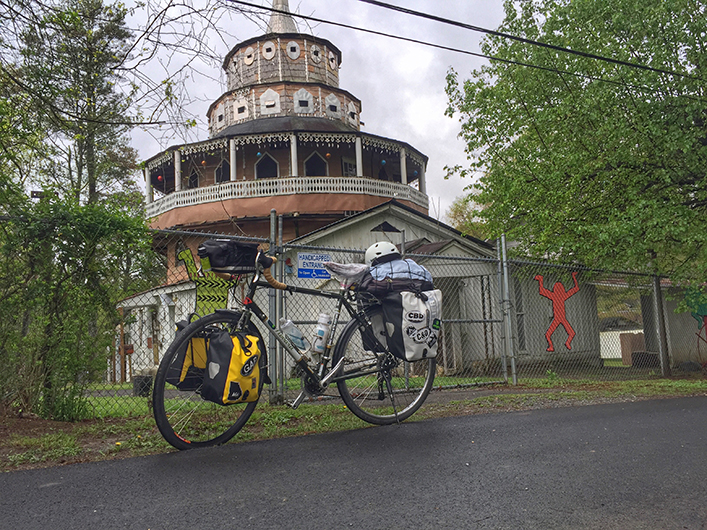 A short detour off USBR 21 brings you to Paradise Gardens, 200 N Lewis St, Summerville, 115 miles into the trip. This was the opus of Howard Finster, 1916-2001. Finster was a self-taught folk artist, known as the “Andy Warhol of the South” who built this garden out of everyday objects as a tribute to inventors. In 1976, his work shifted to painted work containing Bible verses along with historical figures. The bands R.E.M. and Talking Heads used his artwork on album covers in the 80s (remember album art?) and R.E.M. even filmed their “Radio Free Europe” music video at this site. 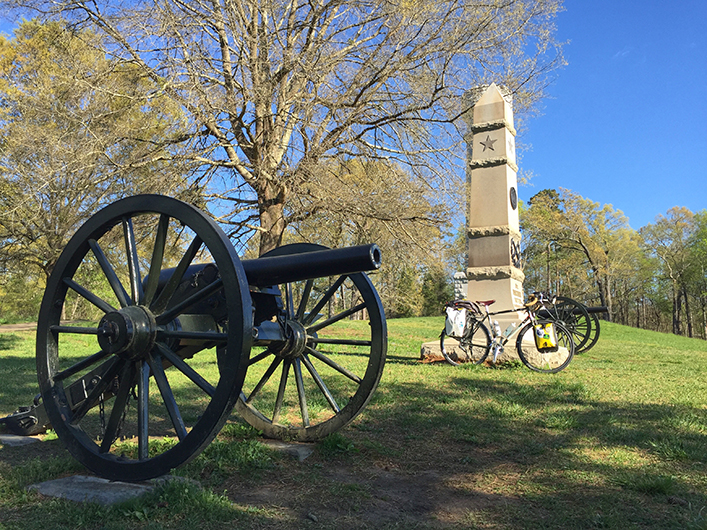 Heading out of my overnight motel stay in Chickamauga, I had breakfast at a Huddle House restaurant, it’s a southern thing, and then cycled into the park about 154 miles into the ride. The Chickamauga battle represents the first Civil War battle fought in Georgia and holds a significant place in Civil War history as its causalities are only exceeded by Gettysburg. Short version of the events in September 1863: Union forces marched south from Chattanooga into the area and Confederate forces tried to drive them north. Union commanders mistakenly thought there was a gap in their lines and when they moved forces around, created an actual gap (whoops!) that Confederate reinforcements could exploit. Union forces retreated to Horseshoe Ridgevto defend from high ground, and were eventually pushed back into Chattanooga. You’ll find much more historical information at the visitor center in the north of the park. 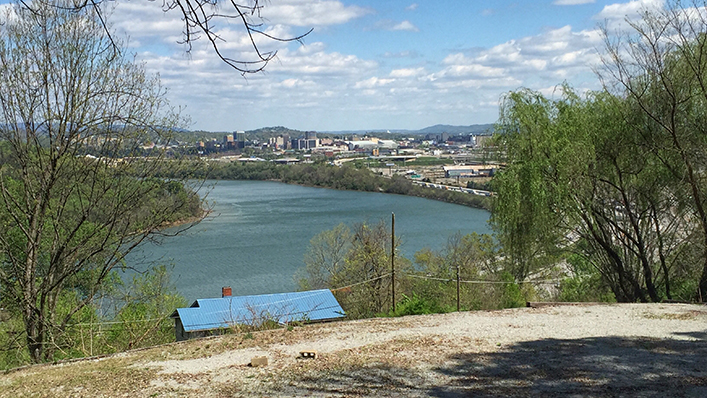 Around 165 miles, I took a detour to cycle around Lookout Mountain, and I’m glad I did. I found the Guild Trail, a gravel trail that gently climbs the mountain around its edges and allows you to gain views of the city from the heights.

The Guild Trail passes underneath one of the attractions on the mountain, the Incline Railway, and loops around the mountain to the north to Ruby Falls. On the way, you’re able to get a great view of downtown Chattanooga after your climb. Take the side excursions on the Incline Railway to Rock City, a tourist attraction made famous by all the “See Rock City” birdhouses and painted barns in the south. Ruby Falls is a beautiful 145-foot indoor falls inside a cave. Coasting downhill from the Ruby Falls parking lot, I headed into West Chattanooga and the conclusion of my tour.

I found the route length of around 170 miles perfect for a 3.5-day tour. I met the family at the destination, toured Chattanooga with them, and then racked the bike on the car to travel home. I thought about the difference between traveling two hours to get home vs. the 3.5 days it took me to cycle. On the bike, I experienced these 10 sites I would not have experienced driving on the interstate. The route touches all your senses with its combination of midtown Atlanta, 52 miles of a carless paved rail-trail, and rural southern roads winding through small towns leading through historical sights.

Adventure Cycling is helping to build the largest official bicycle route network in the world. Imagine being able to easily ride to your destination anywhere in the country on numbered routes that are signed, mapped, and maintained for cyclists. When complete, the USBRS will encompass over 50,000 miles of routes across the country. Click this link if you’d like to know more about the U.S. Bicycle Route System.

Bicycle Ride Across Georgia hosts a USBR 21 trip every fall from Chattanooga, TN to Atlanta. 3 Days/2 Nights - Fully supported with lots of rest stops, SAG, and a fun, after-ride party each night!! Takes place on the last weekend in September. More info: https://www.brag.org/21