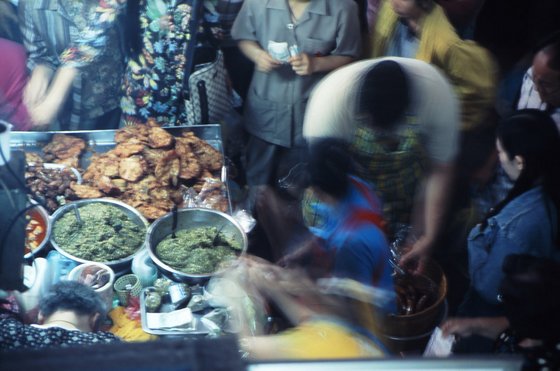 For a concentrated look at a country's culture, you can't beat a bustling market. The once quiet town of Chiang Mai in northern Thailand has grown to close to a million people and is sometimes referred to as Bangkok North.

Wandering around one of the many markets in this city was a sensory overload. Produce stacked to unthinkable heights. The smell of fish, curries, incense, overripe fruit and grilled meat. Above the food and produce, the multi-storied market had more shops and goods to be sold in one building than could be found in an entire shopping mall in the United States.

Amongst the cacophony of sounds whirling around, a single voice grabbed my attention. It was sweet and sad at the same time. Just outside the market walls I discovered the source--a blind man singing. He held a harmonica that he occasionally played, but it was his unaccompanied voice that somehow seemed to represent the Thailand we had learned to love while pedaling the back roads from Bangkok.

Photos can capture the the face of a country, but I find more often than not, it is the music that captures its soul.