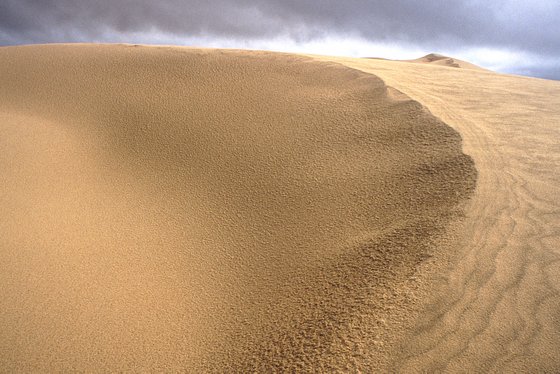 When I show this photo, it is rare that someone guesses the country of origin correctly.

But if you cycle all the way to the tip of the North Island of New Zealand, you'll discover the Te Paki sand dunes.

I parked my bike at the base and trudged up the dunes, carrying my front handle bar bag loaded with snacks, my camera and some binoculars. I'd heard there were dunes, but was surprised at their size. The climb took a good half hour.

The view at the top was stunning -- a sweeping view of the Tasman Sea to the west, the Pacific Ocean to the east, and nearby Cape Reinga (the actual northwestern tip of the country).

While I was soaking in the view, a tour bus pulled up below. I took out my binoculars and spied six people get off the bus. Five of them lingered outside. Two of them took the opportunity to take a smoke break.

But one man immediately began climbing the dune. He was fast. He was determined--his arms rhythmically pumping as he ascended.

As he got closer I could see that he was an Asian man, probably in his early sixties. He had a camera strapped to his back and was wearing a white dress shirt and khaki shorts.

I watched him get closer, focusing on his efforts through my binoculars and rooting him on.

He was no more than two minutes from reaching me and the summit when I heard two long, loud horn blasts from the bus below.

The gentleman stopped dead in his tracks. I watched his shoulders shrug in a full body sigh. He paused for just a second. We acknowledged each other with a little wave. Then he turned and around and headed back down to his waiting tour bus.

I watched his figure get smaller and smaller as he descended. The others waiting for him boarded the bus, which quickly drove away.

I lingered at the top of the dunes, soaking in the sun and the view ... and relishing the travel freedom and flexibility that a bicycle brings.