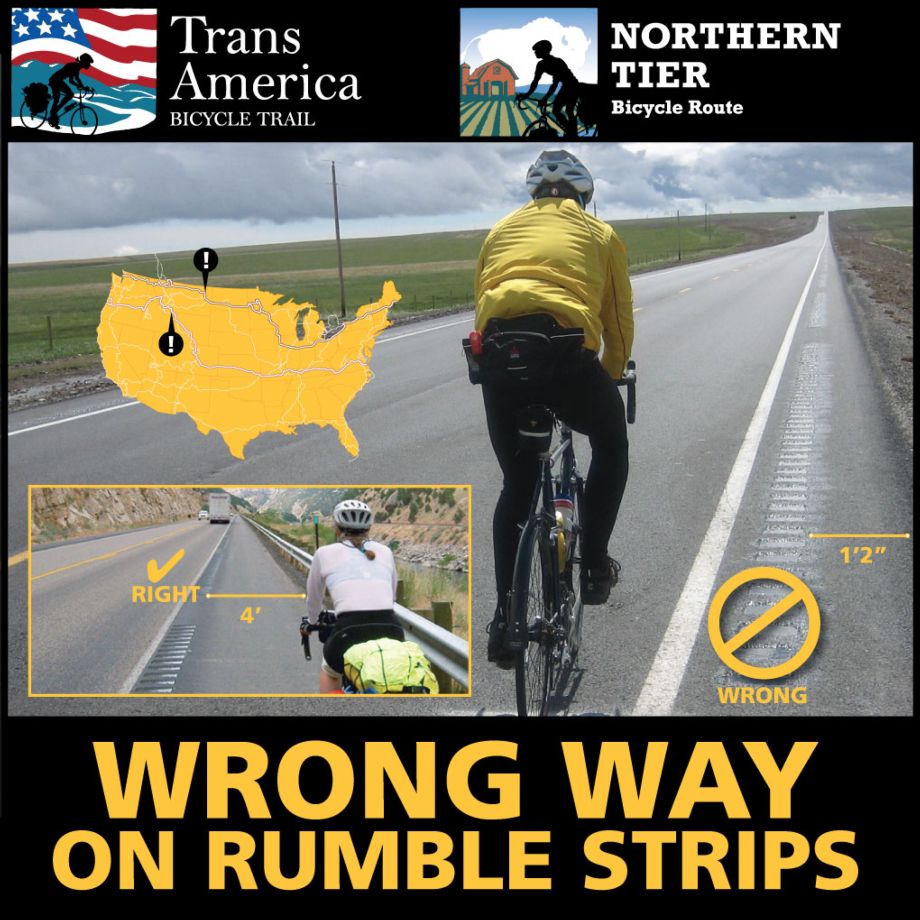 Last week, as you may have read in my GeoPoints post Adventure Cycling issued an unusual call-to-action, asking people to contact the Montana Department of Transportation (MDT) and protest impending rumble strip applications on segments of our Northern Tier and TransAm cycling routes.

While we fully understand the value and importance of rumble strips when applied appropriately, these proposed rumbles would force cyclists into high speed travel lanes with trucks and other motor traffic. MDT has promised to use a strategic approach to rumble strip applications, especially along known bicycle routes, but these projects do not have sufficient data to prove there is no added risk to cyclists’ safety. For months, we have communicated respectfully with MDT about these segments and have recommended improvements to the department’s rumble strip guidance, yet we still find ourselves with rumble strips that put cyclists' lives at risk about to be installed on two of our most popular routes – with very questionable justification. They also violate the Federal Highway Administration’s official guidance for rumble strip applications, which recommends a four-foot minimum shoulder width. We are urging MDT to take cyclists' safety seriously and follow this national standard by refraining from installing rumble strips on shoulders with four feet or less of shoulder width.

To date, despite many emails and other communications from all over Montana (and the world), MDT has not responded. (If you hear from them, let us know). We urge you to keep contacting them through this action page – and please share these links with friends and fellow cyclists.

We appreciate your efforts, and also your feedback. In particular, we have heard from several respondents that our illustration, which features the phrase “Say No to Rumble Strips”, suggests that Adventure Cycling is opposed to all rumble strips. As noted in our communications to MDT and the public, that is certainly not the case; rumble strips can be a very effective safety tool for motorists and cyclists when properly applied. However, we understand the confusion and have altered the graphic to read “Wrong Way on Rumble Strips.” Thanks for the feedback and helping us to make clear our position that there is right way and wrong way to use rumble strips.

We look forward to hearing from MDT soon; please keep contacting them and letting them know that if they are truly interested in safe highways for all users, they will rescind their plans for rumble strips on the TransAm and Northern Tier routes.

This week GEOPOINTS BULLETIN, was written in collaboration with the travel initiatives staff. Geopoints is usually written by Jennifer 'Jenn' Milyko, Routes & Mapping Assistant Director, and appears weekly, highlighting curious facts, figures, and persons from the Adventure Cycling Route Network with tips and hints for personal route creation thrown in for good measure. She also wants to remind you that map corrections and comments are always welcome via the online Map Correction Form.

This situation could be a learning experience, helping ACA to clarify what they want to do.

ACA is caught between its historical mission and portfolio of maps using existing roads, and the recent trend towards emphasizing bike paths, lanes, and off-road routes. Can bicyclists safely ride on a road without 4' wide shoulders? The TransAm has many miles of such routes (including, for example, Kansas 96 west of Rush Center). Much of these routes do not have shoulders, period; bicyclists take the lane, and traffic goes around them. Is this unsafe? If the answer is "yes," ACA needs to move these classic routes, and major re-routing may be required to roads with more, and higher speed, traffic to find those nice wide shoulders.

Would road in the "no" or "wrong" picture be safe if there were no rumble strip? There's often debris on the shoulders (even across a 4-6 foot shoulder outside Hazard, KY) that forces cyclists to ride in the travel lane. On the other hand, there's often farming, earth-moving, or even just mowing equipment trailers that takes more than a lane's width, meaning drivers will intrude onto the "safe" 2' shoulder. If the cyclist were in the lane, the truck driver would know they need to go around; but with the cyclist off the road and riding on the shoulder, the driver may well stay to the right of the yellow line and risk brushing a cyclist on the shoulder while passing. The "wrong" picture is doing one thing right, since a cyclist can dodge onto the shoulder in the rumble strip interruptions (assuming the shoulder is solid and clear). If I were riding that road without the rumble strip, I'd be just inside the fog line, indicating I was in the roadway but I could be passed if the road was clear.

What does ACA want to do? Is it more important to find routes on lightly traveled roads that may have some high-speed traffic, or to make sure there's wide shoulders for cyclists to ride? Should routes like the classic TransAm be moved to bigger roads, or moved hundreds of miles away to find off-road trails? Should ACA discontinue routes that can be used by road bikes and concentrate on linking off-road facilities? Does ACA support banning travel by bicycle on existing roads, and hope that more off-road bike paths will be built?

I rode south on Rt 13 from Warrensburg, MO to Clinton, Mo to ride the Katy Trail. After living and riding in SoCal since 1980 I was confused and surprised by Rumble Strips on a two lane rural route in farm country. The stripping is dangerous because as we rode sometimes with one or two feet of space inside the strip, suddenly on curves the safe space would narrow to 6" and we would have to stop suddenly. The option was stop, then get into the traffic lane, or ride the bumps for several feet rattling and bouncing into the traffic lane. I couldn't understand why on a low traffic two lane road the state put the strips in. I figured a congress person's relative fell asleep driving on the road and was killed. I did not know that Rumble Strips are being implemented across the U.S. due to a misdirected mindset. Basically, Rumble Strips will kill the bike industry and the bicycling movement in one sweep. Mission accomplished by the auto industry, a goal started in the last century. I wonder who, or what company, has the political clout to push and implement Rumble Strips? Who is making the money from it on government contracts?