Montana: Bikes & Brews in the Bitterroot

“We love being a place where travelers can stop, have some beer and food, and connect with the locals. It’s really cool to see people chatting and sharing stories or getting information from locals on nearby trails and such. We love that our awesome, small town is a great place for people to stop while they are on the road and see the gems that Hamilton has to offer.” —Nicol Musberger, Bitter Root Brewing 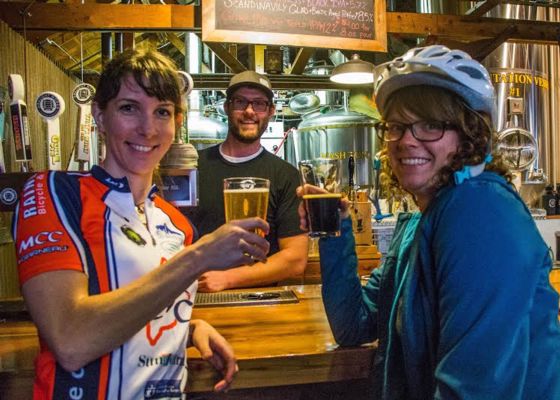 We all know that beer has a special place in the cycling world. Whether you’re doing a leisurely ride along the river or grinding your gears up a steep pass, there’s nothing like a cold beer after a day in the saddle. Cycling has a big impact on the brewery world, and beer marketers know this well. National breweries like New Belgium plaster bikes on their beer labels and feature bikes in their advertisements, but it’s the small, locally-owned breweries that have the most intimate connection with cyclists and their well-spent dollars. Cyclists often incorporate brewery stops into their tours, and here in Montana, 30% of cyclists visit breweries while biking in the state. Along with its stunning scenery, low-traffic rural roads, hospitable people, incredible wildlife, Rocky Mountain vistas, Glacier and Yellowstone national parks, and big skies, Montana’s standing as the state with the third most breweries per capita (one per 27,484 people) is a big draw for many cyclists.

The Bitterroot Valley in western Montana is a burgeoning hotspot for breweries and biking, with ten existing and four up-and-coming breweries, and the Bitterroot Trail — a bike path between Hamilton and Lolo, MT. Even better, next year the final and long awaited segment of the bike trail will be completed between Missoula and Lolo making the trail just under 50 miles long. The Bitterroot Valley is at the intersection of two of Adventure Cycling’s beloved cross-country bicycle routes — the Lewis and Clark Bicycle Trail and the TransAmerica Bicycle Trail. The TransAm is the original cross-country bicycle route that was dreamed up by our founders in 1976, a legacy that lives on in Adventure Cycling’s Missoula headquarters. We humbly call our building the “mecca” for bicycle travel and over 1,000 cyclists stop by for office tours and free ice cream every year.

Paul Marshall, of Draughtworks Brewery in Missoula, describes the impact of bicycle tourism on their business.

“We always knew we needed a lot of cyclists to make our business work. On a summer night, we often have between 75 and 100 bikes parked out front.”

Draughtworks hosts an annual bike race called “Chain Reaction,” in September — a relay race in which cyclists relay race carrying locally grown hops from a farm in Corvallis back to the brewery in Missoula. Part of the race revenue goes towards supporting Free Cycles, a local community bike shop. 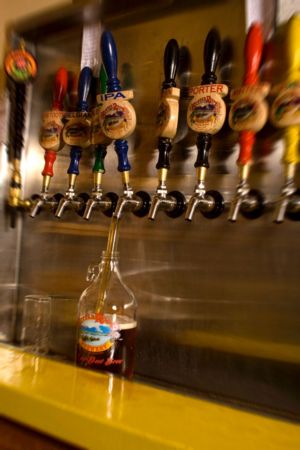 “The most common answer I get when I ask people about their favorite beer is something along the lines of ‘the one I’m drinking now.'’” —Nicol Musberger, Bitterroot Brewing

Cycling and brewing have a symbiotic relationship — the more cyclists that support local breweries, the more those breweries promote bicycle tourism and offer special amenities and services for cyclists. Businesses that go above and beyond stand out, and there’s no better advertising than word-of-mouth in the cycling community. Simple and inexpensive things like secure bike parking, bike locks, maintenance tools (bike pumps, multi-tools, etc.), access to restrooms, water refills, local maps, and information, go a long way in attracting cycling customers.

Bitter Root Brewing's Nicol Musberger recognizes the value in providing these kinds of amenities for cyclists.

“We are a ‘come one, come all’ kind of place and cyclists have always been a part of that mix. More specifically we’ve always had bike racks for people to park their bikes. We’re in the process of having a custom rack built for the brewery out of old bike frames, with plenty of spots for bike parking. It will be chained to the ground for the bikes’ safety.”

Cycle tourists tend to be bigger spenders than other types of tourists; in Montana, cyclists on multi-day trips spend an average of $76 per day, compared to $64 per day from other tourists. They spend an average of 8 days biking in the state and all of that pedal power requires extra fuel, which often equates to the nutritious, calorie-filled, almighty food — beer.

Cyclists, with the extra time they spend on the road, the extra stops they make, and the extra food, drink, accommodations, supplies, and services they need, add up to the ideal customer. It’s as simple as … well, riding a bike!

“It’s not about how the cyclists can contribute to our business, but how we can contribute to their trip. We’re part of a small community catering to an active lifestyle. We want cyclists to stop in, carbo-load, grab a beer, and be fueled up to continue their adventure.” —Lolo Peak Brewery Ambassador, Radd Icenoggle 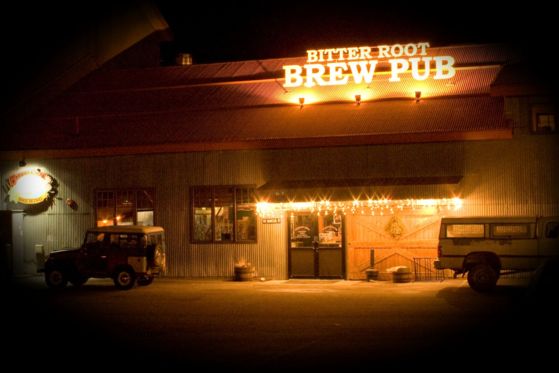 For more information on breweries in the Bitterroot, check out these links to their websites. And please enjoy your local microbrews responsibly.

Breweries in Missoula and the Bitterroot Valley