Fall on the Divide 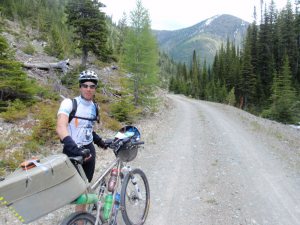 John Nobile in Montana during the 2009 Tour Divide

John Nobile, a 46-year-old engineer from Fairfield, Connecticut, set out from Banff, Alberta, at 9 a.m. Wednesday, Sept. 8, on an individual time trial of the 2,740-mile route, which closely follows the Continental Divide from Banff to Antelope Wells, New Mexico, on a combination of logging roads, gravel roads, trails, and some pavement. Each June, a few dozen intrepid mountain bikers set out to ride the route as fast as they can in a self-supported race called the Tour Divide. The Tour Divide also sanctions individual time trials on the course for those who can't mesh their schedules with June event.

John had hoped to start in June with the Tour Divide, but complications at his job forced him to put off his attempt until fall. He said he is looking forward to the solo effort, but he will face a number of obstacles not present in June. For starters, there is significantly less daylight in September for an effort that already necessitates a fair amount of night riding. Temperatures are also cooler, and the chance of snowstorms in the high country is greater. But September also is typically a drier month than June, and there should no longer be any old snow cover on the high passes in Canada, Montana and Wyoming.

John is a veteran of the GDMBR. He competed in the Great Divide Race, which follows the course from the Montana border to Antelope Wells, in 2006, 2007 and 2008. He pulled out of the race in Colorado in 2006 and 2007, but in 2008 established a new course record on the border-to-border route at 15 days, 1 hour and 26 minutes. That course record still holds. John said he's hoping to best his own record, as well as Lee's overall record from Banff.

Divide fans can track John's record attempt on the Tour Divide leaderboard site, and also at Topofusion's Trackleaders page. As of this writing, John was making his way through British Columbia's Flathead River valley. He should reach the U.S. border by Thursday evening.

JILL HOMER is the deputy editor of Adventure Cyclist magazine. She will contribute a regular column about women's touring and off-road bikepacking.