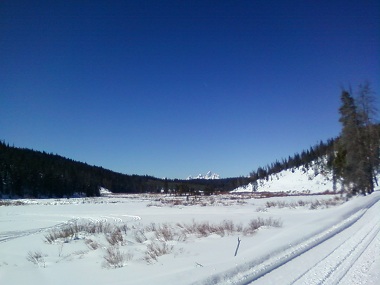 Well in the midst of some adventure chatter, and a libation or two, I said what the heck, and I signed up for the 2013 Togwotee Winter Classic! I decided on the 25-mile race. Bill had great time at last year's race, although that race was a bit of a slog with soft snow contributing to a slow course on which most of the 35-mile racers needed 6 hours or more to finish. I was definitely hoping for firmer conditions this year.

So, about a week before the race, well, I needed a few things:

One unique thing about snow biking is that it is so dependent on conditions and riding surface. A groomed versus an ungroomed trail and hard pack versus a fresh 2 inches or so can dramatically change the speed and ease of travel. Of course this merely adds to the adventure and the fun. Mostly, I was ready for the adventure. Hmmm, well, first a snow bike. No problem, Hellgate Cyclery, a very knowledgeable and super friendly Missoula bike shop, came to the rescue with the loan of a Salsa Beargrease. I was giddy, Bill was jealous. WOW, a Beargrease! Thank you again, Hellgate! I had ridden the Salsa Mukluk 2 and 3, and even took the Mukluk 3 on a big bike-pack snow adventure, so I was super excited to try the famed Beargrease, Salsa's version of a Race Snow Bike.

And Paul again lent me his perfect pogies. These worked awesome on the snow bike adventure, helping to keep gloves and food warm and dry. With the Bike and the Pogies it felt like I was getting prepared. And with the promise from Bill of a rescue, well that he would just come find me, eventually, I felt confident I was ready.

This is a splendid event high in the Teton National Forest and we started just across from Togwotee Mountain Lodge. Race day was perfect, at the race meeting I was a little nervous and under caffeinated. Dave Byers who created this event and has been dedicated to organizing this race each year, assured us, on race day, that the trails were groomed, and that the weather was looking good! 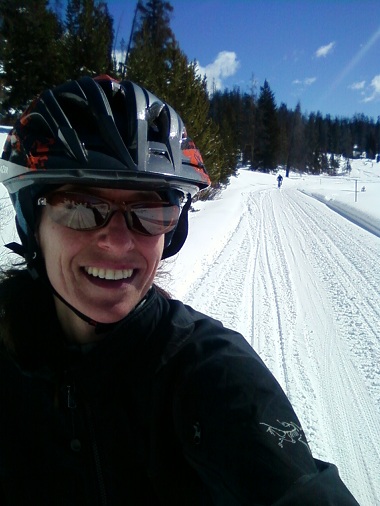 Yup, I had a blast! I didn't get lost, I didn't need to fix a broken chain (pre-race rumors had me nervous about experiencing a mechanical issue on trail), and there were actually a few people (hmmm, maybe 2) behind me!

The day was fantastic with one section of the course opening to a meadow and providing a surreal view of the Tetons in the distance. I actually did have one minor incident on trail when I started fish tailing on a steep downhill section and decided, instead of braking, that I should leap into a snow bank, duh. A fellow racer helped me out of the tree well and I dusted off the snow, made sure I had all my gear, and away I went, only taking it a bit slower on the downhills. 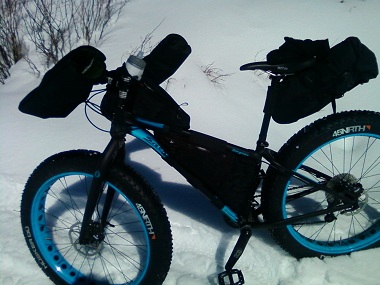 I also fell in love with the Beargrease (sorry Bill) and wanted to keep riding off into the sunset, just me, the bike, solitude, and the expansive winter wonderland. The bike was super comfortable and easy to maneuver, it felt light and easy to keep rolling. I really did love this bike, also my frame bag fit well and my seat bag stored all the extra bivy equipment in addition to extra supplies, water, the emergency flare (kidding). Having this extra gear, I felt prepared and that allowed me to relax. I took my time, I enjoyed the sites, I took a few pictures, and I'm already looking forward to next year.

And, I saw Bill on the route, in the lead pack, and was able to pass on a few encouraging words, that was thrilling. The post race gathering provided race stories, much cheer and lots of prizes including sponsorship by Fitzgerald's Bicycles, The Bunnery, and a lots of others including Hamilton Threadworks, Bill also won some handcrafted pogies made by Sarah Hamilton. Good camaraderie, great stories, and some amazingly fast times for the winners. Tracey Petervary had an amazing finish in the 25-mile race with a First Place for the Women and a Second Place Finish Overall, only a few minutes or so behind the first place of the Men's 25-mile race! Awesome!

Well, enough of snow, it's spring now! What adventures are you planning? I'm actually headed down to Texas in a few weeks to co-lead one of Adventure Cycling's Big Bend van-supported tours. Thinking about adventure and need some encouragement? Check out some spring and summer adventures with Adventure Cycling:

ON THE ROAD is written by the tours team -- Mo, Paul, Madeline, and Steve -- tours specialists and intrepid bicyclists, covering all things related to Adventure Cycling's Tours Department. Check out the 2013 Guided Tours!