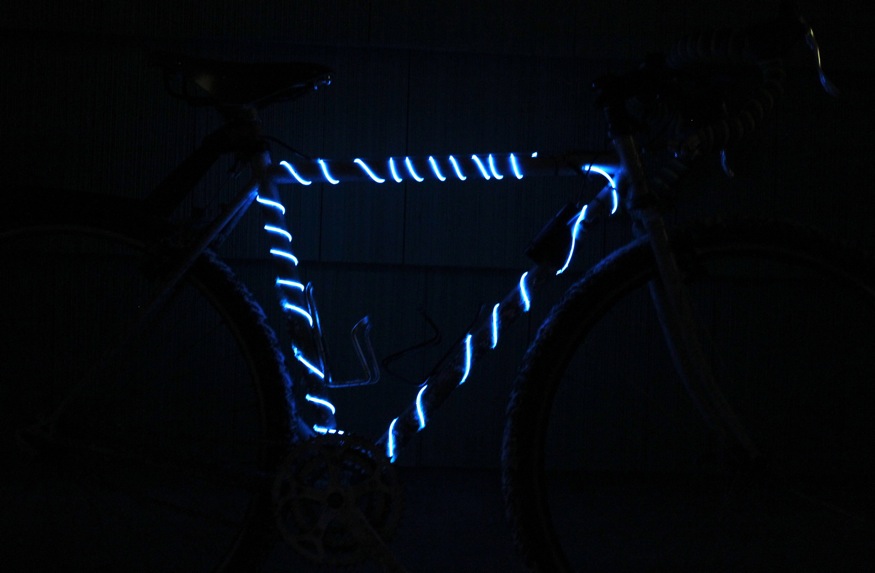 Even when you're out on tour, you may find yourself riding around town in the dark. Maybe you're heading to the store to stock up on food, or checking out the nightlife away from camp. In such cases, it's a good idea to make sure you are visible to traffic. While headlights and tail lights are great for this, you also want to be seen from the side, especially at intersections. Spoke reflectors are certainly helpful, but they aren't a lot of fun. If you really want to make your presence known, the Bike Glow is worth taking a look at.

Bike Glow is a 10-foot electroluminescent tube that can be wrapped around your bike frame, and is powered by a small battery pack containing two AA batteries (not included). The battery pack can either be stuffed into a saddle bag or fixed to your frame with the included Velcro strap.

When wrapping the illuminating rope around your frame, you want to be sure that you don't wrap it over your cables and housing; you'll also want to keep it nice and tidy and away from around any moving parts, such as crankset and wheels. When you're finished wrapping it around your bike, you can tie it off with some included zip ties.

The full setup only weighs around 100 grams, and it is unobtrusive enough that you won't be bothered by it when riding around during the day. There's a great variety of color options (red, green, blue, aqua, pink, purple, yellow, and white), all of which feature three light modes of steady, slow blinking, and fast blinking. When the Bike Glow is turned off you can still see a tint of color in the tubing; so, if you want it to blend in during the day, try to choose a color that comes close to matching your bike's paint.

At $25, these are a fun and inexpensive addition to your bike. They will definitely garner some attention and help keep you safe at night.

Thanks for writing about BikeGlow Safety Lights!

Regarding the comments, the BikeGlow kit is a 10 foot length of EL wire, rather than a strand of LEDs as is the VineLights mentioned. Also, the BikeGlow kit has a ruggedized, waterproof driver/battery pack specially designed for attaching to a bike, using the included velcro straps. It would be difficult to match the quality and purpose design using off the shelf parts.

Please visit us at http://www.bikeglow.com !

Not sure how you can say it is not waterproof, but even if you are correct, I still think the glow light at 5 times the cost is overpriced. There are many other sources of outdoor led strings that are battery powered and at a much less substantial cost.

That LED vine light looks not so great, but that aside, it sure isn't waterproof and made to attach to the bike frame. I'm not sure it compares to what bikeglow is doing.

It most certainly can be done for less than $10 WITH A BATTERY PACK. http://www.glowsource.com/vine-lights.html

Actually, while you can find 10' of this type of wire light for probably $10, you will need a power source. Most available power sources are flimsy little battery packs. You'll have to solder on some connections, or get a pre-made kit that is meant for decorating a window.

BikeGlow took the light wire, specifically created waterproof connectors, a waterproof battery pack that specifically attaches to a bike frame, put it all together, and included all the attachments one would need.

They did all of that all the while keeping the price below the $25 price point, the probable value of the entire light kit. They've made it easy and accessible for bike riders.

While I disagree you can do it for under $10, you can probably do some research, find the parts, and build a kit yourself. A lot of people don't want to do that.

Instead of bagging on the seller for not giving away the light, maybe thank them for doing the due diligence to make this type of light easily accessible for more safety options for cyclists.

Why is it that if something is packaged as an accessory for a bike that the seller finds it necessary to double or triple the price. A little research and you can find something quite similar for under $10.