This article first appeared in the August/September 2022 issue of Adventure Cyclist magazine.

The Pine Mountain, Marin’s 29er bikepacking hardtail, is like that one teenager we all know who’s stuck finding their own place in a growing world. Like having a famous parent, the Pine Mountain has a lot to live up to as it shares its name with one of Marin’s original production models, yet it’s also trying to stay relevant with the rapidly growing adventure bike category. Zit jokes aside, it’s wrestling with finding its identity, but I believe it has a lot of potential for adventure.

I tested the Pine Mountain 2, the more expensive of the two available models, and my first impression was good. The Pine Mountain 2 frame is made from Marin’s series 3 double-butted chromoly steel and comes with a respectable build kit fit for a bike of its caliber. The RockShox 35 fork up front paired with its progressive geometry gave it a fun, capable feel on descents and climbs while not sacrificing speed in the flats and flowy sections. However, there is no question that this is still a hardtail, which I was reminded of quickly on my local rocky limestone trails here in central Texas.

First, the downsides: the handlebar is aluminum with a crossbar that to some may share a cool resemblance with moto and BMX bars, but that crossbar makes for an unforgiving feel over anything other than smooth hardpack. The frame also felt stiff in the rear. I was hoping that the 2.6in. gumwall tires would be able to relieve some of this stiffness, but they always felt either too low and loose or too high and bouncy, which made it hard to hold a line and feel confident in rougher sections. The Vee Tire Flow Snap did not work well at any pressure I tried them at, even set up tubeless. I received many comments on the look of the bike, and it does have a certain retro vibe going for it, but the first upgrades I would recommend immediately are new bars and tires, which, depending on the tires and bars chosen, may change that throwback aesthetic. 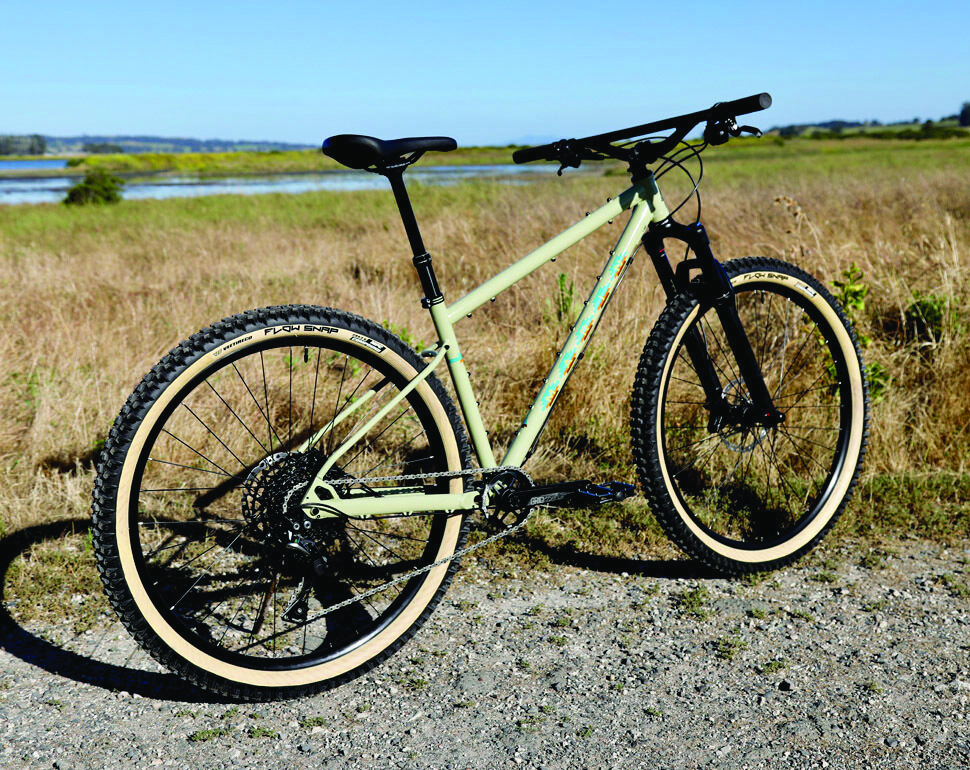 I tested the Pine Mountain 2 on some local trails and did not like the way it handled loaded on rough singletrack. The stiffness in the frame combined with a high enough tire pressure to carry me and the gear caused the bike to bounce around and lose lines and traction. Taking it into corners, especially following a descent, was also pretty shaky. After trying it loaded on trails, I decided to take the Pine Mountain 2 on a gravel route in the Texas Hill Country, which is more popular with dropbar 29ers. This route had steep climbs, plenty of washboard, and a lot of loose sand. This is where the Pine Mountain 2 shined. The 2.6in. tires gripped the loose sand and gravel even on climbs while loaded where most bikes would have to air down, compromising the rolling resistance. It carried the load well, but the tires still always felt like they had too much pressure even into the mid-20 psi range, once again making cornering difficult. On the gravel, the Pine Mountain 2 carried speed well. I would have liked to try it out with an alt bar, like the Surly Moloko, for more hand positions on the long, straight sections.

The rest of the bike fits what I would want in an off-road adventure rig. The Shimano SLX 12-speed shifting was smooth and reliable, and the 10–51T gearing is ample for keeping up on the flats and scaling features that otherwise would have me on the run — in other words, on my feet instead of in the saddle. The brakes were the plenty capable MT520 four-piston up front and the MT500 two-piston in the rear. The brakes felt balanced and sufficient, always stopping me before I got in over my head. I tested the size large and, at just shy of six feet with a 32in. inseam, I’m the shortest person I’d put on the large with the stock seatpost. The braze-ons on the seat tube prohibited the seatpost from fully bottoming out in the frame. Fortunately, the 170mm travel dropper post at its lowest possible extended position was the perfect height for me to achieve proper leg extension.

Packing gear on the Pine Mountain 2 was a breeze. With so many braze-ons in the front triangle, I assumed that Marin would offer a bolt-on framebag, but that’s not the case. If you want a bolt-on framebag, it’ll have to be purchased elsewhere. Marin has images on its website showing braze-on locations and measurements for each frame size, which makes it far easier to either order something custom made or shop with confidence for a pre-made bag; I found my medium Salsa EXP framebag fit the frame well. The Pine Mountain 2 also has mounts on the top tube for a direct-mount feed bag, which I always like, as well as rear rack mounts and room for a bottle cage under the down tube. One positive aspect of the crossbar on the handlebar is that it allowed for more mounting space for lights and other accessories without a front bag blocking the light or getting in the way. There are plenty of other places to mount racks, fenders, and bottle cages, but like most bikes with front suspension, there’s nowhere to mount accessories on the fork. I was still able to pack plenty of gear on the handlebar, in the framebag, and under the saddle.

My overall opinion of the Pine Mountain 2 is that it’s a good bike, but not great. The aesthetics and packability were great, but the off-road performance was lacking. I know it’s a lot to ask from a hardtail to handle things a full-suspension would do, but a lot of steel hardtails these days are more compliant and forgiving through rougher sections. I would recommend this bike to someone who wants a bikepacking rig to do some gravel tours and light trail tours and also take it on well-groomed cross-country trails. The Pine Mountain 2 looks the part of an adventure bike and has the potential to be a great one, but out of the box, it would need new tires and a new handlebar to start. As a mountain bike, it has everything that I would be looking for in this price range: thru-axles front and rear, 120mm of suspension travel, powerful brakes, a 12-speed drivetrain, two-piece cranks, a dropper seatpost, and slack, progressive geometry. However, all of that is hindered by how stiff the frame and handlebar are. I’d give the Pine Mountain 2 the same advice I’d tell any teenager who seems lost but has a lot of potential: find the things you’re good at and you enjoy and focus on getting better at them. Don’t worry about what anyone else is doing.

In the Shadow of Mount Shasta