I did not think I would like this bike. Sure, I thought it’d be fun and a little funny — certainly I’ve hosted some guests who were very curious to hop aboard and have a chukle. But I expected to find the Brompton a very clever (and expensive) novelty, sort of a two-wheeled party trick that’s too cute by half. But I’ll be darned, this little bike is good. Really good.

By now the Brompton faithful are dipping their quill pens to start an angry letter about what they’ve been trying to say all along. That’s fair. Even as we published a full-blown Road Test in 2017 from Adventure Cycling Tour Leader Sarah Burch, I read along shaking my head “Yep, uh huh, ok, I see your point … but no, not for me.” Truth is, though, I’d only taken Bromptons around the parking lot. For two minutes they are fun and a little funny. After that they become something a bit more.

First off, the folding sequence and size of these diminutive rigs is an engineering triumph. Full stop. One hundred percent of people who see the bike unfurl and then fold back up are impressed, as well they should be. While I won’t be winning any Brompton World Championships with my folding speed, transforming the bike from luggage to luggage hauler really is a cinch and even weirdly satisfying as the rear wheel swings out and clicks into place. The various mid-assembly positions for storage or transport are handy as well.

Once road-ready, though, those wheels start to look quite tiny indeed. My iteration featured the company’s touring setup, which amounts to six total speeds thanks to a three-speed Sturmey Archer internal gear hub and a two-speed cassette. The resulting gears cover a wide spread, but with enormous jumps. If you’re sensitive to cadence, this is not the ride for you. But the Brompton has other charms, like a dynamo front hub powering front and rear lights, a toolkit nested inside the main tube, fenders with generous mudflaps, and one of the most comfortable saddles I’ve ridden in years. Bromptons are highly customizable and company's configurator gives a good idea of what's available and what it costs.

The other distance riders might worry about is the one from head to toe — at 5’11” I found my ideal saddle height at the maxed seatpost extension. The cockpit was otherwise upright and comfortable, one might even say lightly suspended thanks to the expansive seatpost and long, thin handlebars. Thanks to this inherent flex, the Brompton is remarkably smooth despite its tiny 16in. wheels that could be easily swallowed up by any average pothole and armored-up Schwalbe Marathon tires in a skinny 1 ?in. width.

A rear rack (with tiny luggage wheels for rolling the bike when folded) option offers a pretty standard deck for gear, while up front Brompton’s “Front Carrier Block” allows for very intuitive mounting and quick releasing of compatible bags. I used the brand’s large T Bag, which swallows 31 liters of stuff and features thoughtful rider-facing bottle and storage pockets. Be warned that when stuffed, this bag obscures the front wheel and because it’s mounted to the frame and not the fork does not rotate around the steering axis. A heavy load can feel a bit unwieldy, but I quickly adjusted to the steering characteristics — adjusting to the visual input of the bag staying stationary while the bike turned, however, has proven more difficult. 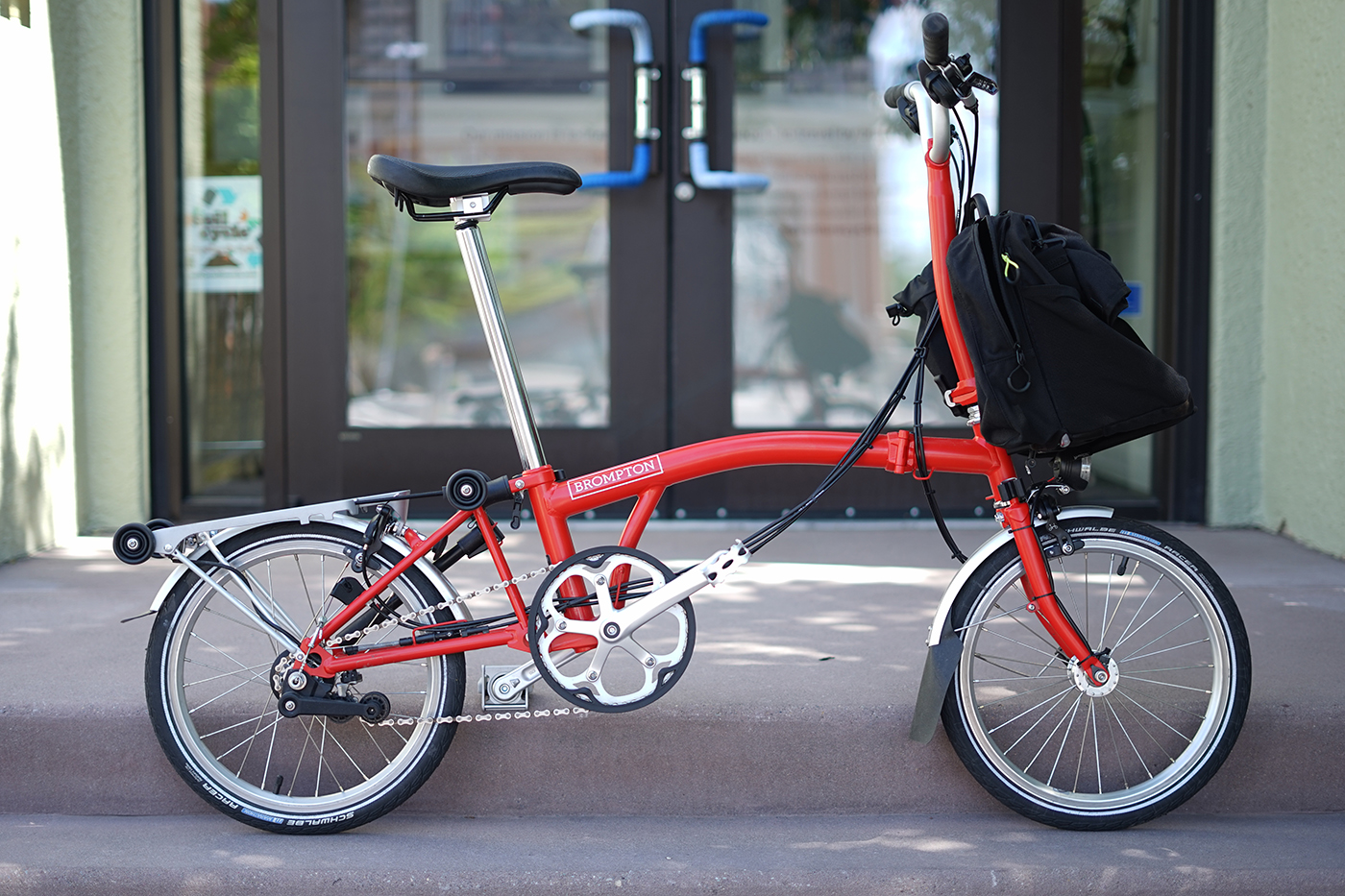 Riding the Brompton generally felt quite like riding a regular bike, which may sound like damning with faint praise, but is rather remarkable considering the compromises you’d expect to find. One quirk I found was that because the drivetrain is so low to the ground, riding in foul weather gunked things up much more quickly than on a 700c-wheeled machine.

As Sarah noted in her Road Test, long-distance touring with a Brompton can require a little creativity. The front-mounted bag can only hold so much and panniers aren’t an option when your axles are eight inches off the ground. But while I was chatting with some folks from the company during a spring expo when Brompton VP of marketing and retail Peter Yuskauskas pulled up a photo of his personal bike leaning against a power pole with a large external frame backpacking pack lashed to the rear rack.

“That’s hilarious,” I said. These bikes really are funny.

“My wife and I flew to Cancun with the bikes as carry-ons and pedaled down the Yucatan for a week,” he said.

So would I buy a Brompton (as spec’d this loaner was about 1,400 British Pounds)? If I lived in a city and commuted without easy storage, heck yes. But I’d also be a little tempted to hold out … at that same expo I demo’d Brompton’s new eBike, which might very well be the ultimate folding companion and is hands-down the most interesting bike I’ve ridden in 2019.

Three of us are currently on tour in Finland on Bromptons for four weeks. Last year we did the river Danube. You can see our set up on my blog. https://ridingbicycles.co.uk/finland-in-lakeland/

What a fun read, Alex! Glad to read you have experienced, first-hand, the value of Bromptons. They truly are powerful little machines.

I rented a Brompton in Edinburgh some years ago to tour the Outer Hebrides, Orkney and Shetland, and found it a wonderful bike. The only real problem was the innumerable cattle guards: it really is essential to stop and wheel the bike over, though I did accidentally go over a couple at high speed with no more damage than a rattling. I had a lot of trouble getting the rear tire on and off when I had a puncture: I currently own a Bike Friday, and it is also hard to get the tire of that: difficulty seems to be inversely proportional to wheen size.

I don't remember that the front bag was mounted on the frame - but anyway, I had no difficulty getting used to it. I also used a medium sized backpack over the rear pannier: that is s.o.p. for me on all bikes, as I like to hike, too.

This being Scotland, some days were foul - I'll never forget arriving at the cafe at John o'Groats and the floor was one giant puddle that had dripped off all the cyclists arriving from Land's End! However, I had no trouble with anything getting gunked up. I guess there was a very high water:mud ratio!

I bought a Bike Friday for my really long distance trips in Europe (Sweden to Tbilisi; Sweden to the Volga), and I some ways I wish I had bought the Brompton: packing up the Bike Friday for the return trip by air is a major issue if you are not using the suitcase as a trailer. Hauling the Bike Friday to the 4th floor of a semi-derelict hotel in Russia is a lot harder on my back than hauling the Brompton would have been, as is hauling the Friday up onto a French train.. The Friday has lots of gears, but I didn't find the gear spacing on the Brompton a big issue.

All in all, I'd say the Friday is better for the really long trips that are all Bike, and the Brompton is better if you're older (I'm 77) and you expect your trip to be more multi-modal.

My wife and I got Bromptons a few years ago. Last fall I flew to Paris with my Brompton in the overhead luggage compartment. Took the train to St Nazaire, and then spent three weeks meandering across France on the Brompton before riding in to Strasbourg. I loved touring on my Brompton. It is also a great bike for errands and we enjoy using the Bromptons as we travel around the country with our travel trailer

I'm lucky to have a Brompton dealer in my small home town. I wanted a bike to fit in my Mini Cooper so I could ride anywhere anytime, so once I chose the B. over the competing Dahons (no contest), I ordered up my custom build and waited two long months. I got the bike two years ago and it has rejuvenated my cycling. I've put 4000 miles on it so far in city, roadway and rail trail. I watch You Tube hero 'Brompton Traveler' take his all over the world on epic camping journeys. It's a sport and a hobby and I'm getting fit because of this wonderful machine.

I bought my Brompton (6 speed, H style handlebars) two years ago.....and LOVE IT! I too was a bit reluctant. Two thousand dollars for a bike that I was unfamiliar with and never "test rode" was a big decision and a bit unnerving to say the least. I planned to use this as my primary bike for recreational trail rides. It's portability was what really kept my interest. The decision to make this sizable purchase would be based upon what I could learn about using this bike for my purpose plus I was curious about some light touring capabilities on the Brompton. After researching various channels on YouTube I surprisingly found quite a bit of information that got me motivated. However, there were no local distributors in my immediate area, which meant I would need to place my order through the Brompton website and drive 8 hours round trip to pickup the Brompton at the closest distributors shop. The owner of the bike shop (distributor) contacted me to review my order and called me "bright and early" when my Brompton was ready for pick up. He assured me that all the accessories I ordered were ready and he would remain open until I arrived to pickup the Brompton. Although there is a bit of a "learning curve" for getting use to riding a Brompton, I found the adjustment was really easy. Today, I keep my Brompton folded in the back of my Honda Pilot during the riding season, always available at a moments notice. I get a lot of "notice" at the trail heads when I unfold the bike getting ready for my rides. Not a bad choice for recreational riding, and a MUST for commuting!