Geared Up: Ready for Anything: Salsa Updates EXP Line 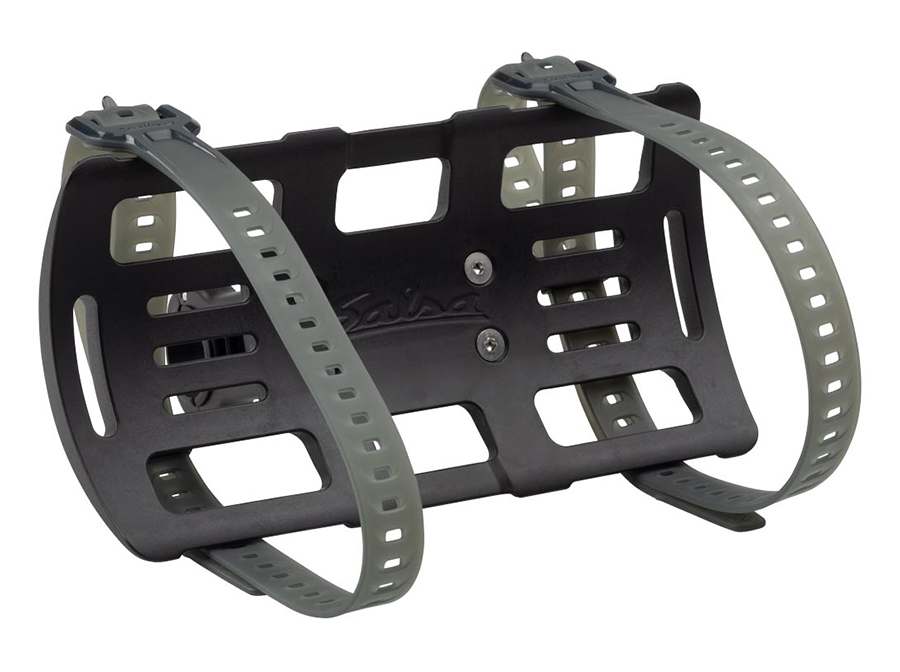 We’re big fans of Salsa’s Anything Cradle (for proof, look no further than Nick Legan’s review from 2018). Simply put, there is no better functioning, better constructed bolt-on handlebar harness on the market. It has a fairly low maximum weight capacity (8 lbs.), but it doesn’t obstruct your cables and brake lines like strap-on harnesses and it stays put, even in rough terrain. Ever since it first came out, I’ve had only two complaints about the Anything Cradle: one, the arms are too long, and two, it only works with 31.8mm handlebars. While the arm length remains the same on the new version, Salsa redesigned the clamps to fit the increasingly more common 35mm handlebar diameter, with included shims for 31.8mm. And whereas the previous version came with finicky nylon straps that everyone I know immediately swapped for rubber ski straps, Salsa has learned its lesson and now includes its own well-designed rubber straps. (Note: If you already own the original Anything Cradle, you can upgrade to the 35mm-compatible arms for $60.) 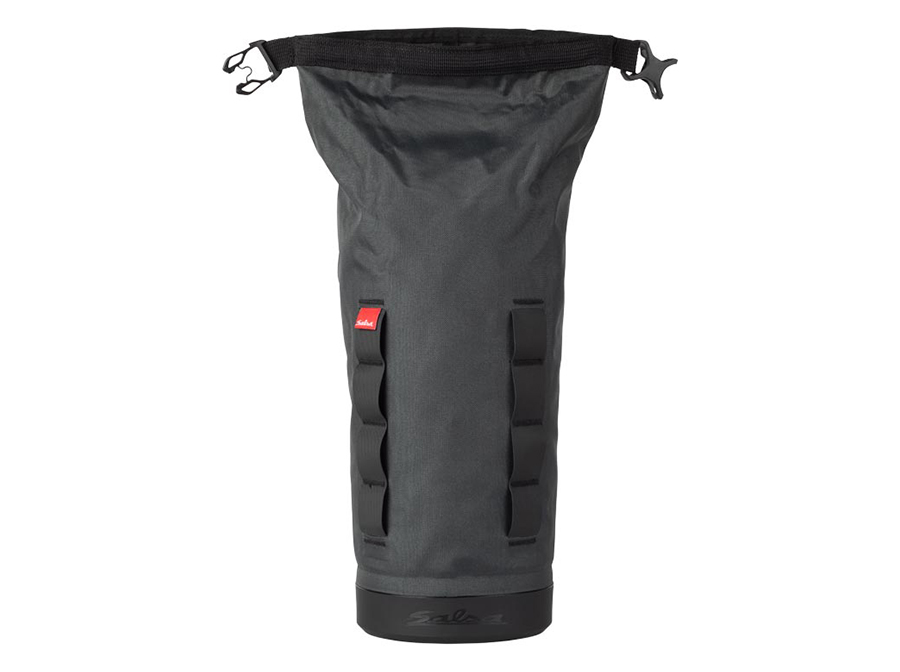 Salsa’s Anything Cage Bag was an instant classic when it first came out. While other bagmakers improved on the design to various degrees, I didn’t think there was anything wrong with them. Well, it turns out the new and improved Anything Cage Bags are just that — improved. Shows how much I know.
At 3.35L, the new Anything Cage Bag is a little smaller than the previous version, which had a capacity of 4.5L. But despite the smaller size, improvements abound, including two rows of daisy chains on the outside to accommodate the new rubber straps (a vast improvement over the previous nylon straps), a slicker interior surface to make packing easier, and, most significantly, a molded rubber base to allow the bag to stand up on its own. Like the previous version, the new Anything Cage Bag is made for Salsa’s Anything Cage HD cargo cages, but I found it worked just as well with King Cage’s lighter and more svelte Many Things Cage, even when strapped to the underside of the down tube. 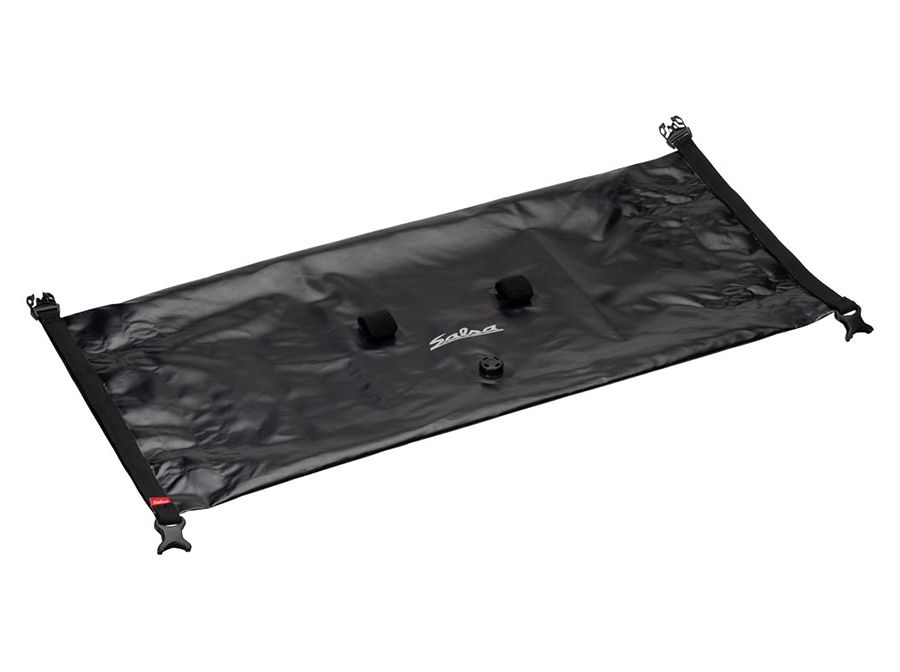 The side-loading drybag is a staple of bikepacking gear, and while there was nothing wrong with Salsa’s previous iteration, the new one features noteworthy improvements. First, the fabric is much lighter and more pliable and, like the new Anything Cage Bags, features a slicker interior surface for easier packing. Second, the new Dry Bag has a purge valve, which, in my humble opinion, should be mandatory for any large drybags. Finally, Salsa added a nice touch to the Dry Bag in the form of two slots with included hook-and-loop closures to strap the bag onto the Anything Cradle. They’re not meant to support the weight of a packed bag (that’s what the new rubber straps are for) but rather to keep the bag in place for packing and unpacking. It’s a neat little feature that makes for a big improvement in practice.

New for this year is the Top-Load Dry Bag, made for dropbar bikes, that has all the same features of the new Side-Load Dry Bag but with a narrower width (about 14 inches), a larger diameter, and a roll-top closure. Unlike using a regular side-loading drybag that you would have to pack less and roll much tighter to fit between dropbars, the Top-Load Dry Bag has a much better chance at fitting between your brifters even when stuffed to the gills. 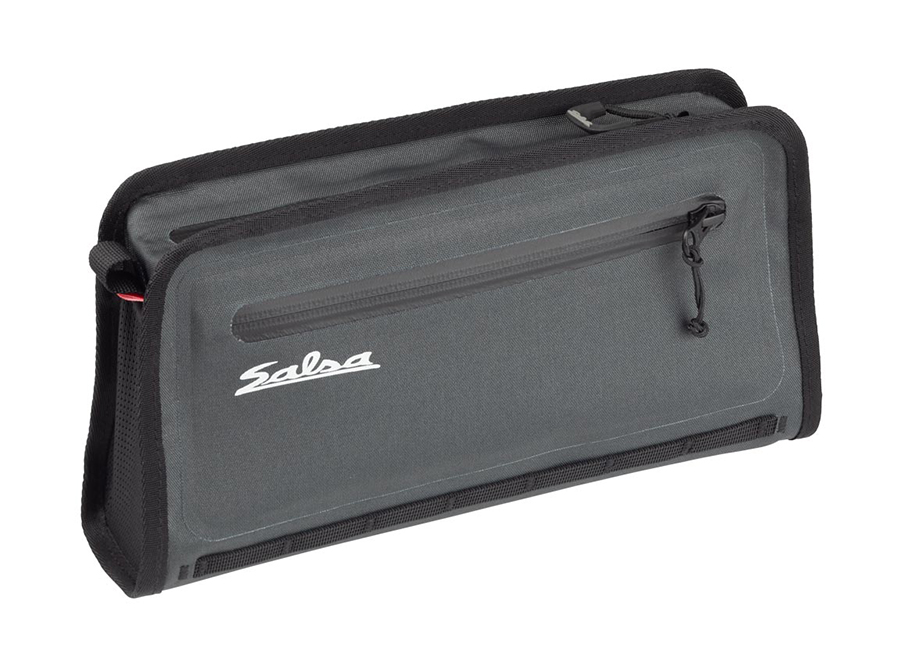 My favorite among this slew of updates is the new Front Pouch. Like the other bags discussed above, the Front Pouch has been redesigned with lighter fabric and now features a zip opening up top, a small zip pocket in front, and small mesh pockets on either side that just so happen to be sized perfectly for a bottle of tubeless sealant or a tube of sunscreen, both of which are exactly what I used them for. The front zip pocket is sized for cash and cards while the main compartment is big enough for a whole day’s worth of snacks. The back of the Front Pouch has several slots that allow you to either strap it onto one of the Dry Bags using the same rubber straps or affix it to your handlebar as a standalone bag using smaller included straps. In both cases I found the Front Pouch to be simple, secure, and easy to use.