Geared Up: Falling for Autumn 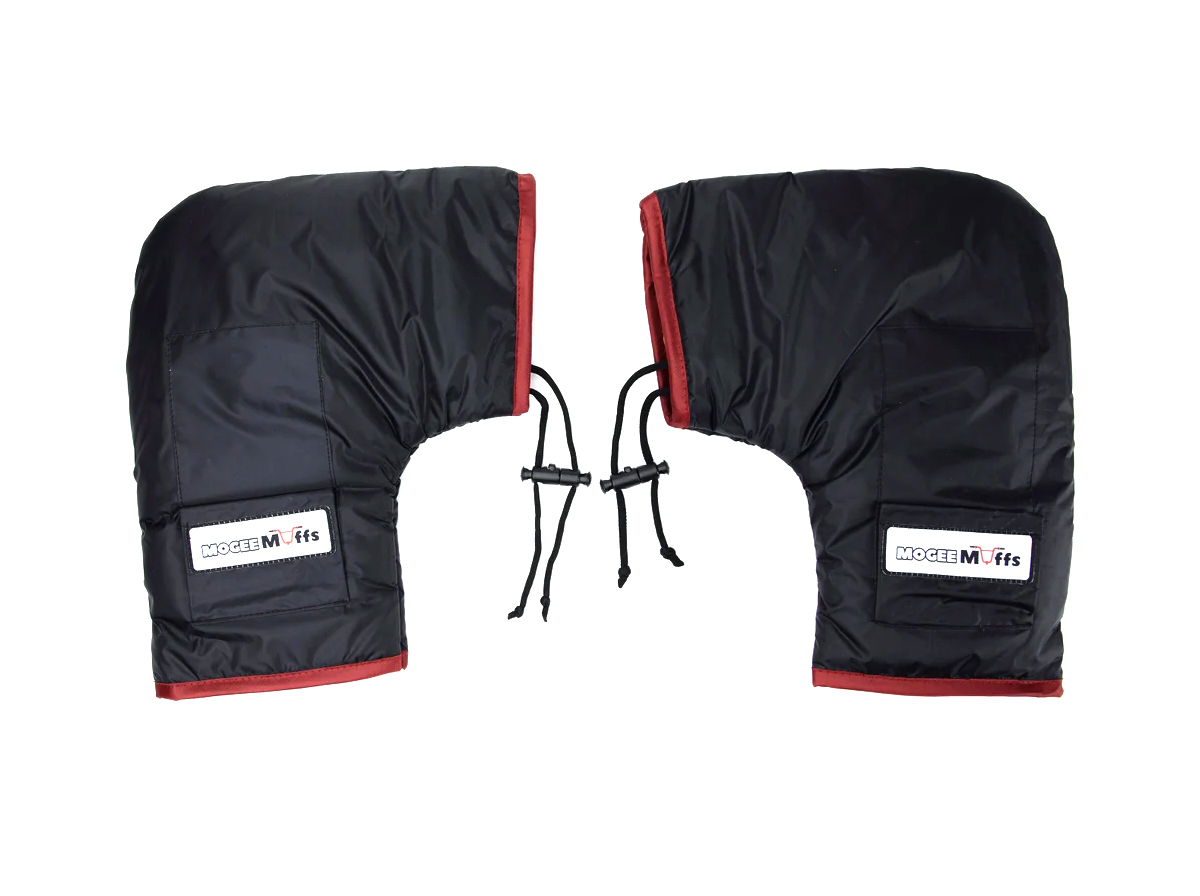 I’m not a glove person. They’re necessary for winter riding, but I always, always lose at least one. And I know that these days you can buy gloves that allow you to operate smartphones and whatnot, but I still find myself biting my glove off mid-ride to check Gaia or send a quick text. Gloves are great, they really are, but I believe pogies are even better.

It took me about two seconds to install Mogee Muffs on the swept-back flat bars of my commuter bike — almost the same amount of time to realize that there is no right or left muff. They’re interchangeable! Brilliant. The muffs secure onto handlebars by cinching a drawstring, which makes it easy to take them off when you arrive at your destination. The sense of luxury I felt upon first thrusting my cold hand into the fleece interior sold me instantly. It drizzled for the whole first week I was testing the Mogee Muffs and I was thrilled about how weather-resistant they are. They’re somewhat thin compared to other pogies on the market, but because my hands are typically the first part of me to heat up when I’m riding, that was actually a benefit for me. Each muff sports a small velcro pocket on the outside that’s perfect for a small wallet, a phone, or — my preference — a snack.  –Ally Mabry 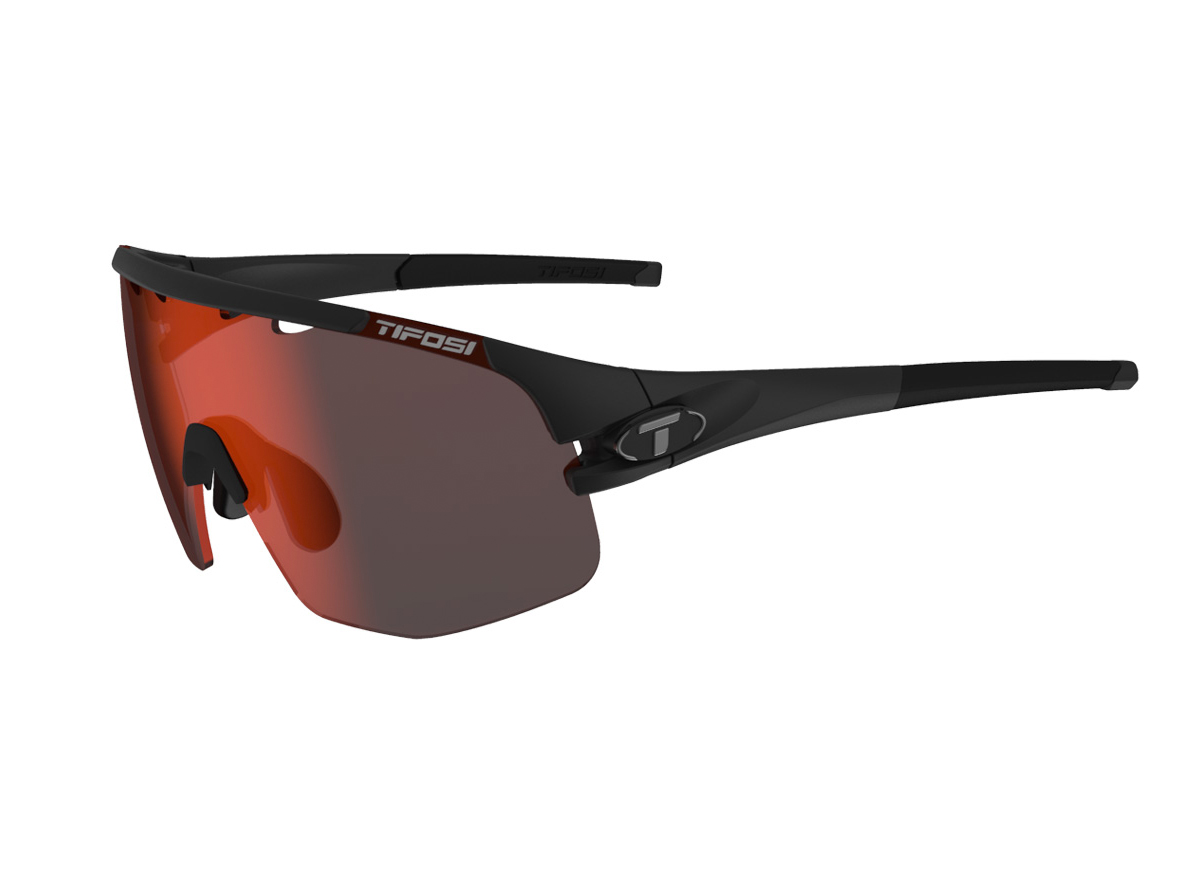 If you ride often at dawn or dusk, or in heavily wooded areas with ever-changing light conditions, sunglasses with photochromic lenses can be a life-saver. Tifosi’s Sledge Lite with the Fototec lens, which darkens or lightens as the ambient light changes, is an affordable option at $80. With a half-frame and a vented, large-coverage lens, the Sledge Lite is ideal for all disciplines of cycling. I used the Sledge Lite for morning road rides in Salt Lake City’s canyons and evening trail rides in the foothills, and I found the optics to be crystal-clear and free of distortions, and I really liked the big lenses for their better eye protection and expansive view. Compared to significantly more expensive options, I found the Fototec lenses to have a slightly narrower band of functionality. In other words, they’re not quite as dark at their darkest and not as light at their lightest. I’d call that a fair tradeoff for the Tifosi’s price. More concerning for me was the fit: the Sledge Lite never felt quite right on my face, and the uppermost portion of the lenses would rest against my eyebrows and smudge as soon as I started to sweat, a problem I solved by stowing the glasses in my helmet for climbs and putting them on only for descents. But fit is a personal thing, and the Sledge Lite might be just right for your face. When the market is saturated with cycling glasses for two or even three hundred dollars, it’s refreshing to see some high-quality shades at a price most of us can afford.  –Dan Meyer 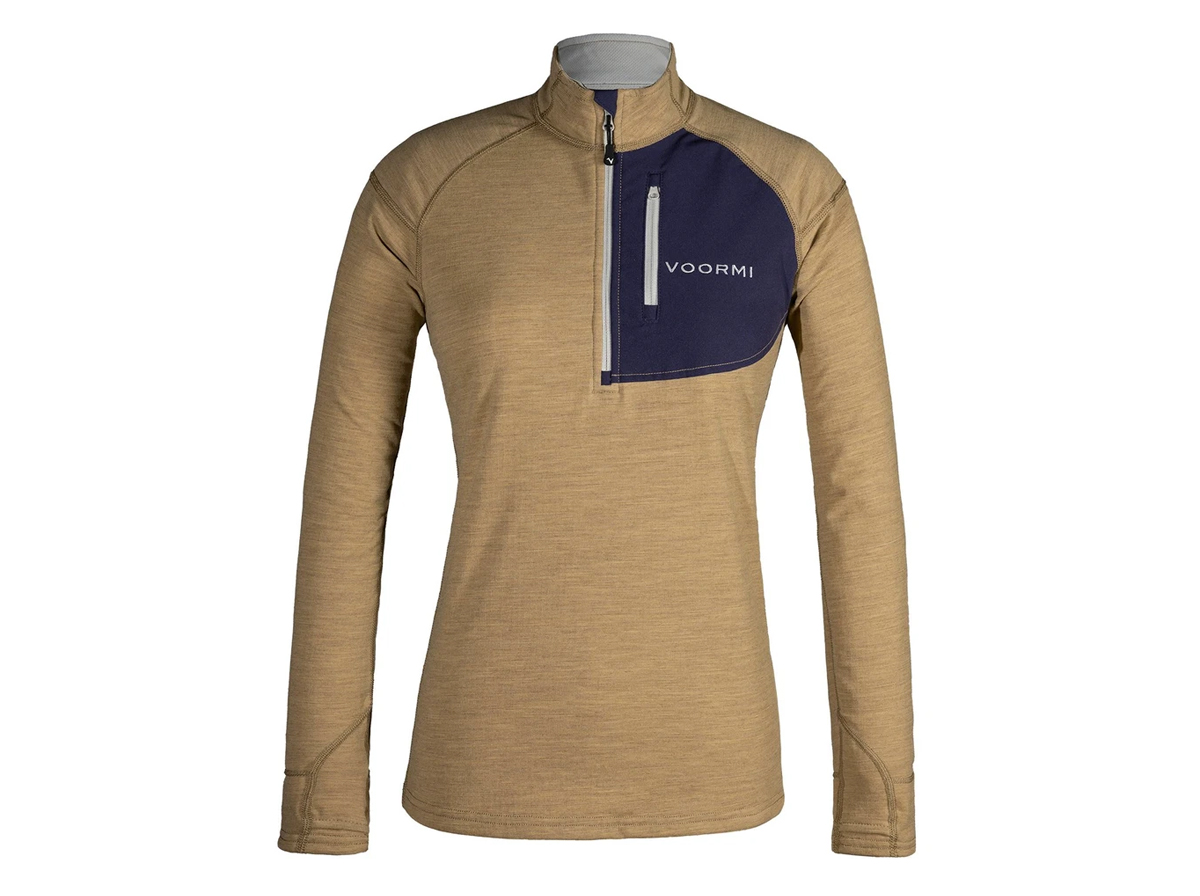 I received the Voormi Access Nxt Pullover a few months back, but it had been too warm to give it a real test until recently. I did, however, wear it to the office a few times, and a visitor noted how much they love Voormi as a company and as people. Now that temperatures are rapidly dropping, I wear this sweater most every day — don’t worry, it’s wool. Voormi calls it “Surface Hardened” thermal wool, and I think that’s a fair description. Touching the outside of this sweater, I wouldn’t guess it’s wool, though it doesn’t feel like cotton, nylon, or any other fabric. Maybe denim? The inside, though, is a soft fleece but without any of the bulk. I admit it took me a few wears to get used to the outer texture with its tight weave and water-repellent finish, but once the temperature truly dropped and the weather became chaotic, this shirt made total sense. The hardened outer layer has wicked off the season’s first flurries while riding and kept me insulated and dry during an early morning drizzle while taking the dog for a stroll. At night, tossing on a puffy jacket has been enough to keep me toasty while these mountain temperatures drop with the sun, and the relatively thin material doesn’t make wearing an outer layer uncomfortable in a riding position. The cut on this woman’s version is sleek athletic fit that enhances that lack of bulk, the stretchy side pockets make it very comfortable for riding and especially for long days when you’re shifting positions a lot, and the chest pocket is conveniently located and large enough to hold a modern smartphone (which by now are basically laptops). I’m not typically one to like thumbholes, as they never seem to be in the right place for me and are neither comfortable nor convenient, particularly while riding. These, however, are naturally comfortable while still being integrated enough into the sweater cuff that they are barely noticeable, and help close the gap on my wrists caused by gloves. It is absolutely an investment piece at $229, but considering it can be worn as a standalone shirt, a pullover on a chilly day, or an important mid-layer on a cold one, and is made of natural fibers that withstand multiple days of active wear at a time, I think it’s worth the cost of admission.  –Carolyne Whelan 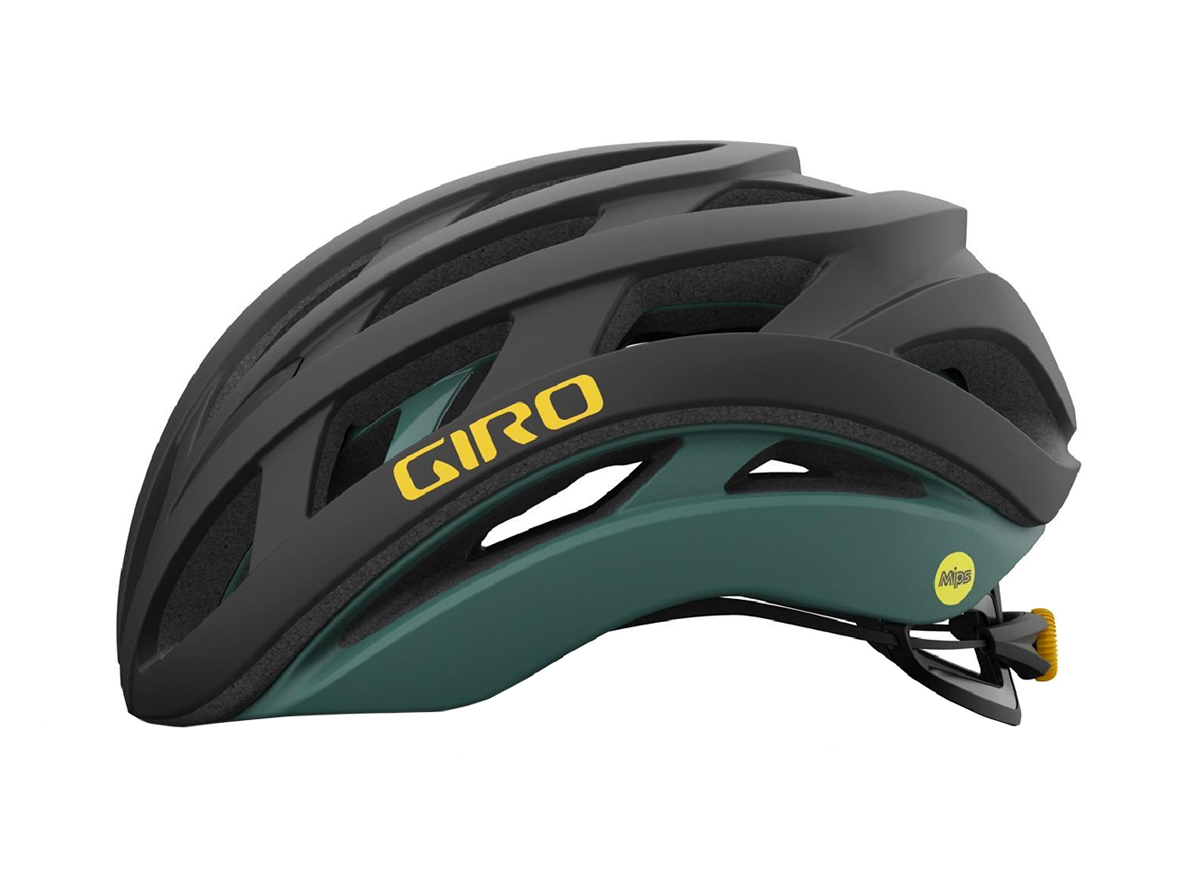 After trying out a couple of helmets that felt huge, heavy, and mushroomy on my head, I was pleased to arrive at the Giro Helios Spherical helmet. Like the other helmets, this one has innovative brain-protecting technology, but it’s not bulky by any means. Giro’s latest iteration of MIPS, Spherical MIPS, is designed to be super effective at dissipating force. It’s essentially a helmet inside of a helmet like a ball and socket joint — in the event of a crash, the part that the chin strap attaches to remains stationary and the outer shell rotates to absorb impact. The two shells are held together with elastomers, so the tilt of the outer shell can happen in any direction up to a whole inch (if I’m really forcing it). Anyway, this helmet will protect my brain and is so lightweight that I don’t even feel it when I’m wearing it — score!

Giro added a nice touch with the ability to adjust how high or low the retention system sits on the rider’s head, which I appreciate as a ponytail-wearing cyclist (choosing to lower the system creates enough space to pull my hair through.) I also really love the placement of Giro’s antimicrobial XT2 padding on the front of the helmet, which is both comfortable and offers permanent odor protection. There are also a whopping 15 vents, which make this a highly ventilated helmet, perfect for summer weather. While I have to be honest and say that $250 is more than I would like to pay for a helmet, the combination of premium technology and lightweight design might just be worth it.  –AM 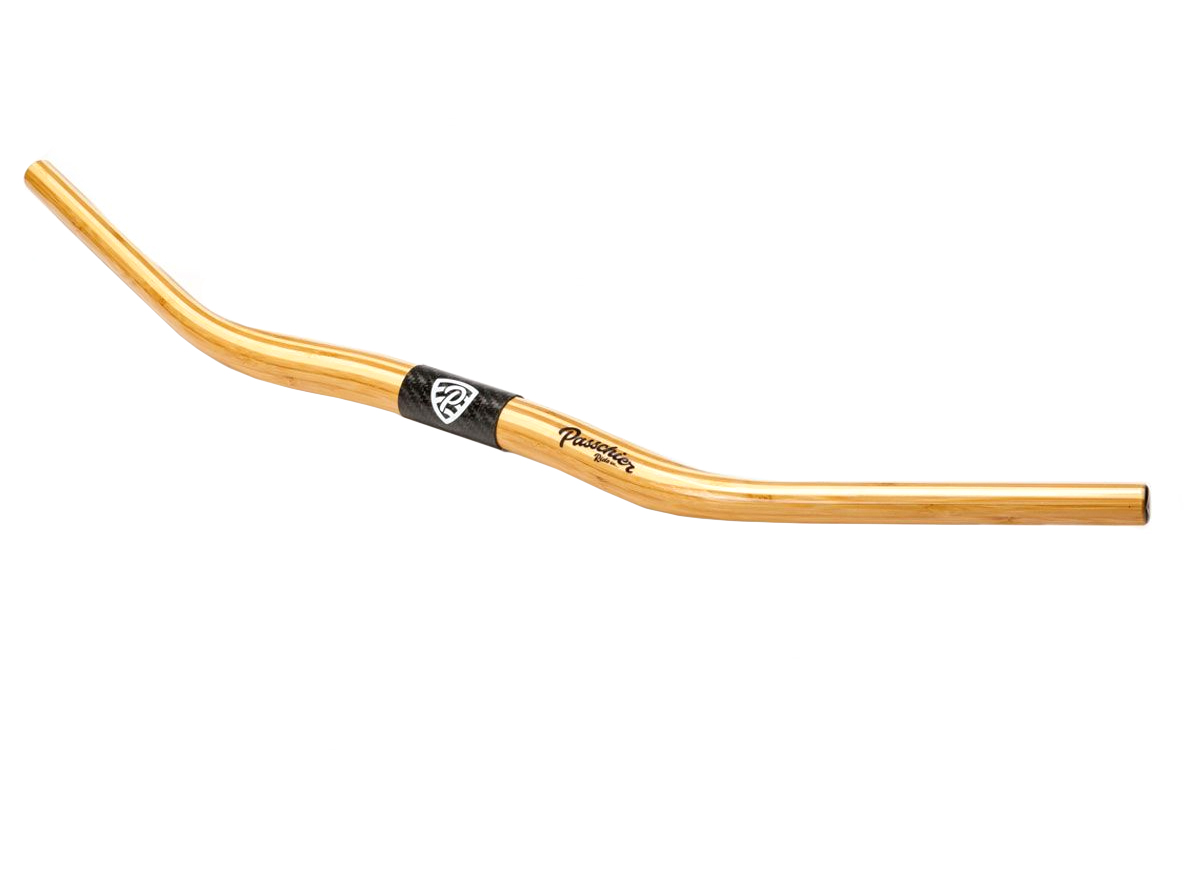 There are precious few axioms in the world of bike travel, and one is comfort never goes out of style. As someone who often gets sore hands from mountain biking, I was excited to check out the Gump 760 handlebar from New Zealand–based Passchier. The Gump (also available in 650mm width) is made from bamboo, and as such feels very different from the alloy, steel, and carbon bars I’ve used. In short, the Gump is VERY flexible. It was enough to be disconcerting at first, but I quickly got used to it and came to appreciate the flex on bumpy roads and trails. Passchier was quick to point out that the Gump is not intended for extreme downhill mountain biking but rather for easy trail, bikepacking, and commuting. I will admit that I rode some pretty rough trails at speed with the Gump, and it stayed in one piece. Not convinced? Passchier’s website has video of the testing the Gump has been subjected to, and suffice to say this bamboo is sturdy stuff.

Installing the Gump took just a teensy bit longer than other bars — it comes with clear stickers you apply where your brake and shifter clamps go to avoid marring the wood surface. The Gump also includes a carbon fiber sleeve in the center to protect from overtightening the stem clamp. One step you don’t need to take when installing the Gump is bar ends: it’s solid bamboo, so no need! I used ESI foam grips to maximize the comfort factor, and they’re what’s on most of my bikes anyway, which makes comparisons easier. The result? The Gump took the place of what I consider a pretty springy carbon bar, and with it I ended rides with far less hand pain than usual and feeling fresher to boot. The Gump’s width is a little less than I prefer, and the sweep is quite a bit more, at least for trail riding, but I found it to be ideal for dirt road cruising. The big miss, in my opinion, is the 0mm rise. I like at least a little rise in my handlebars, and so do most of the people I know. The only other downside I can think of is the price: $250 is a lot for a handlebar, no question. But if you’ve been suffering from sore hands and haven’t found a cure, you might be willing to pony up.  –DM 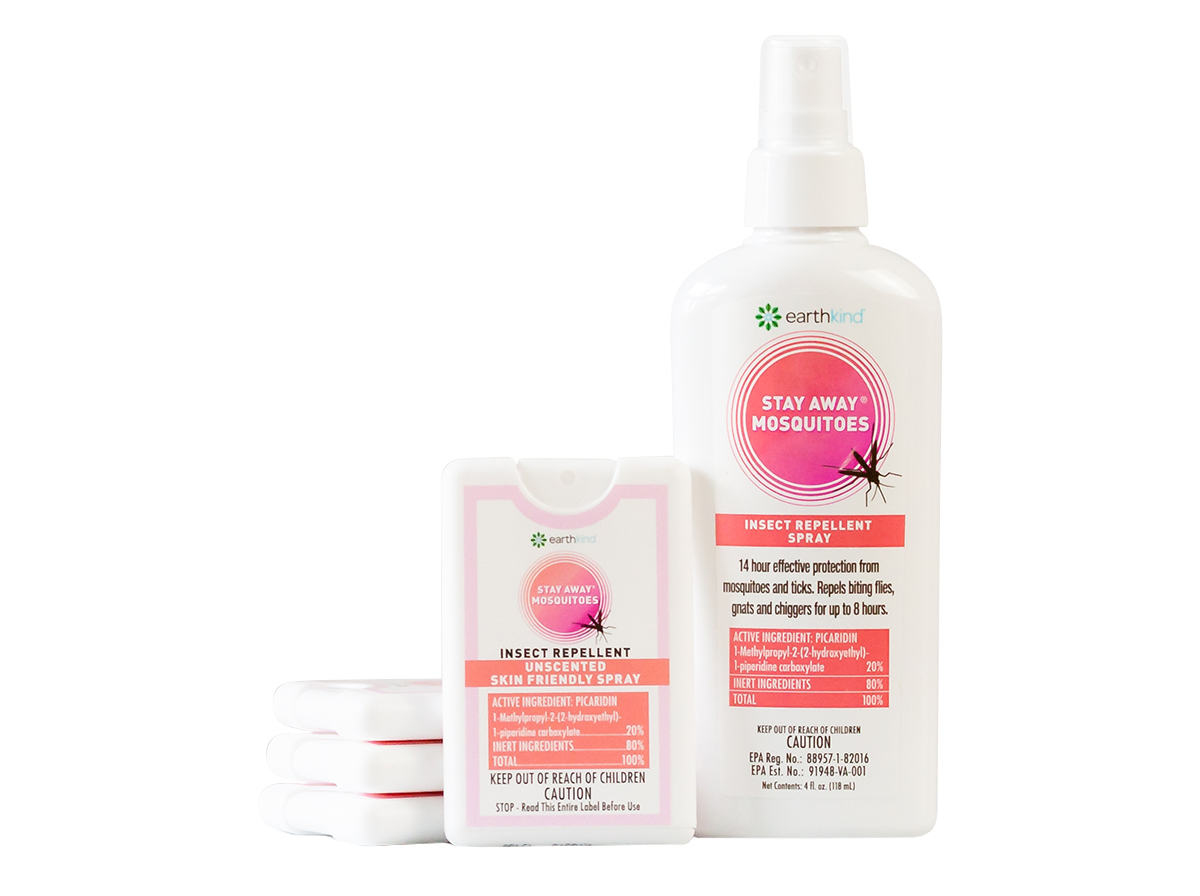 I spent this past summer living out of my lil camper van. I had a blast traveling around and “base camp bike touring” to check out so many rail trails, protected lanes, and off-road/unpaved networks in the northern part of the country from Pennsylvania to Montana. I wasn’t able to make gigantic screens for the big sliding door or the back doors to allow for a cross breeze, and what I learned is this summer was the perfect time to be a bug. In Minnesota, I woke up to what I thought was a hail storm but was just bugs banging into the roof. In Michigan, the moths flooded in like orcs storming the walls of Hornburg. And in North Dakota, the ticks crawled en masse like ants and the ants filled the dog food bowls I’d left outside, ostensibly to carry out each piece of kibble on their strong backs like a terrible cartoon. While there is nothing to protect us from the heartiest of tiny critters except for a life of bored insulation, I came to appreciate Earthkind’s variety pack of repellents that seemed to keep the worst of it at bay. The moths didn’t stay the night, for instance, and the ants stayed clear of the inside of the camper even when I left the door open for a cross breeze. I didn’t come across any rodents, and the spiders were all very friendly as I assisted them off my leg and onto a nearby branch, and it’s a real challenge to say how much worse for the wear I’d be if I didn’t have any of these repellents. I will say I have come out of this travel unaffected, with no moths in my van, no mosquito bites to scratch or tick bites to stress over, and no travelers who have taken up living quarters in my pantry. The mosquito and tick repellent notably comes in a flask, an incredibly thin, wallet-sized bottle you push down on to spray, making it the most easily accessible bug spray I’ve ever used. That it, like the other Earthkind products I’ve tucked strategically into cubbies around the van, is also non-toxic, smells good, and didn’t poison me or my dog in our small compartment is a definite added bonus.  –CW