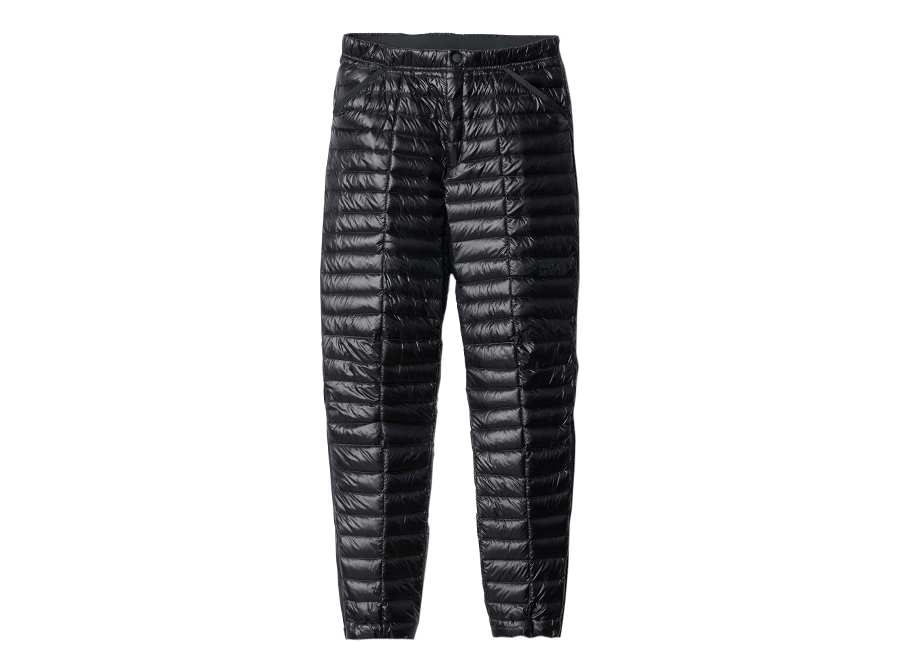 Sometimes after a long day in the saddle, I get to camp and start shivering. I’ll often put on my puffy, make tea, and even snuggle into my sleeping bag, but that makes it hard to cook, set up my tent, and do other crucial camp chores. Mountain Hardwear’s baffled Down Pants solved my end-of-day body temp drop, and they keep me warm on cold days until I go to bed. The 800-fill RDS-certified down pants are stretchy enough that I can pull them on over my bike shorts when I get to camp. Once I’m ready to get out of my bike clothes, they slide off easily. When I’m really chilly and need to get into these ASAP, the to-the-knee-zips are handy. They let me put the pants on without taking off my bike shoes.

Deep pockets keep my hands warm while I’m waiting for water to boil, and wide elastic in the ankle keeps them from being drafty. I’ve never ridden in these pants — the outer fabric feels fragile, and one rotation through the drivetrain would surely shred them. So would bushwhacking through a blackberry patch. But for wandering from tent to picnic table, they’re perfect. The pants pack into their own pocket when not in use, making a perfect pillow. Available in women’s and men’s, though the women’s version is being discontinued soon. And you can currently save $100 on discontinued colors in both men’s and women’s.  –Berne Broudy 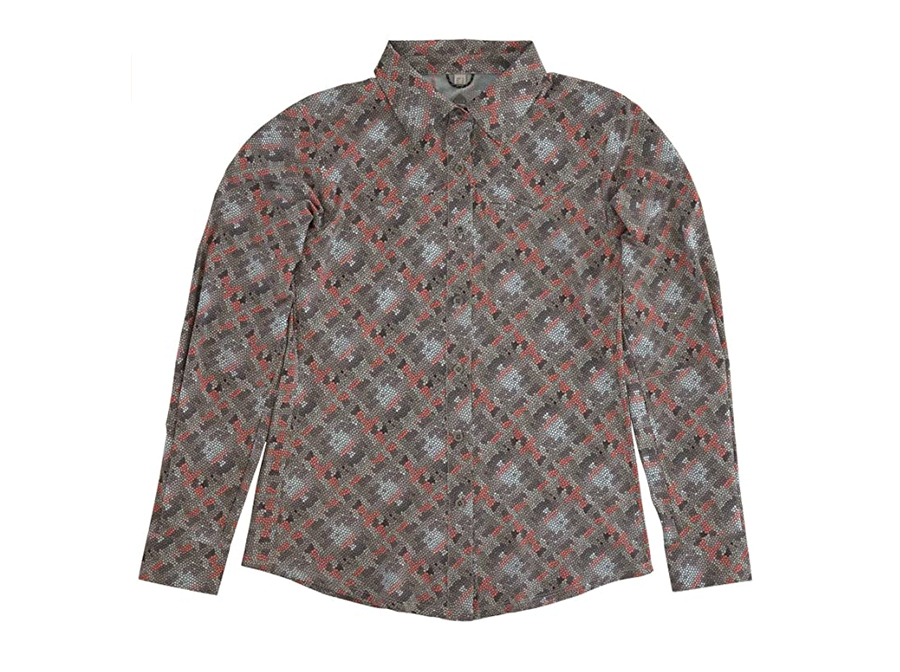 Sometimes I want to wear something other than a bike jersey to ride in. Club Ride’s Gracie Long Sleeve has become one of my favorite shirts to tour in because it’s not a typical jersey but rather a shirt that’s great for cycling all the same.

Inspired by Western wrangler shirts, this button-down collared long-sleeve top is made from UPF-50 four-way stretch poly spandex. It’s silky feeling and light enough that I wear it when it’s cool but also for sun protection. And it’s super nice to be able to put on something that doesn’t look like a jersey to grab takeout or hit the grocery store. Snap closures at the wrists let me roll the sleeves up or down one-handed while pedaling. And the stretchy fabric is non-restrictive whether I was riding, casting for supper, or stretching post-ride. I used the microfiber sunglasses wipe sewn to the shirt hem frequently. I also really appreciated the chest sunglasses holder — the skinny chest pocket holds one arm of a pair of sunglasses and kept my shades from getting dropped and scratched. At night, subtle reflective stripes on both forearms lit up in headlights.

Club Ride’s website says this shirt has a hidden rear pocket. Either that’s a typo, or it’s so well hidden that I’ve never found it. Runs true to size in XS–XL.  –BB 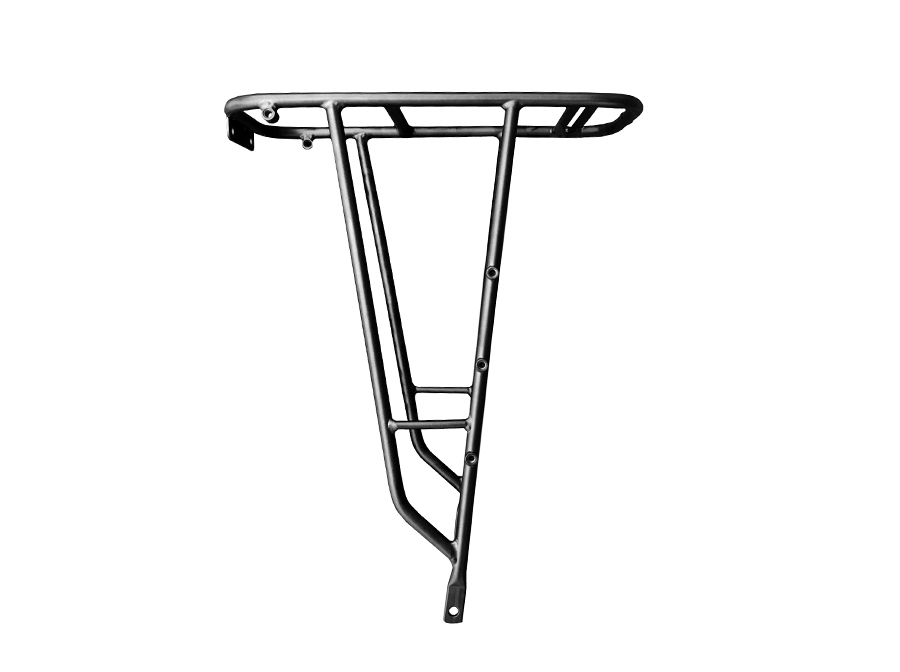 Tumbleweed, maker of the unique, expedition-ready Prospector bikepacking bike (see Nick Legan’s review in the June 2017 issue of Adventure Cyclist), also sells a pair of racks that depart from the norm: the minimalist T Rack, and the slightly less minimalist Mini Pannier Rack you see here.

Out of the box, the Taiwan-made Mini Pannier Rack feels sturdy and is clearly well constructed with high-quality welds. It mounted up easily to a few different bikes, though I did have to trim the struts to fit. (Tumbleweed offers the rack in two different platform heights to fit a wide variety of bikes, and each rack arrives with two sets of upper struts.) Once on the bike, the Mini Pannier Rack felt just as rock-solid as more traditional racks I’ve used. To properly test the Mini Pannier Rack, I just happened to have some mini panniers on hand — North St. Bags’ Micro Panniers, in fact — and, surprise, they fit together perfectly. I even tried Ortlieb’s enormous Bike-Packer Plus panniers on the rack and, with a little adjustment to the lower hooks, they fit pretty well. I heard neither groan nor creak from the rack, even with the big panniers loaded to the brim with groceries. (For on-road riding, Tumbleweed cites a maximum load of 40 lbs.; for bumpy off-road, 20 lbs.)

But what makes the Mini Pannier Rack unique is its versatility. Along its main legs are braze-ons for mounting bottle or cargo cages. If you were so inclined, you could mount a couple of small drybags to either side of the rack and strap your tent, bedroll, or a foam sleeping pad on top, ending up with a sleeker and potentially lighter setup than with traditional panniers. Or you could carry Nalgene bottles for desert touring. Or fuel bottles. Or bear spray. Let your imagination run wild.

At $140, the Tumbleweed rack is a little pricier than, say, some of Tubus’s more minimalist offerings, but then Tubus can’t match the versatility of the Mini Pannier Rack. And after plenty of light- to heavy-duty use, the only wear I can see is a few paint scuffs. (Note: Tumbleweed is currently accepting preorders for its racks, with the next batch arriving in November.)  –Dan Meyer

If you can dream up a tread pattern, sidewall specifications, and width, there’s bound to be something out there in the ever-expanding world of tires. Nowhere has this proliferation been more rapid than the gravel market, which encompasses, as far as we can tell, almost anything.

I’m a longtime fan of Wilderness Trail Bikes’ tires, with which I’ve had excellent performance, long wear, and few flats. Also, they’re pretty darn economical. So I was excited to try the Raddler, a “radder” version of the brand’s widely used Riddler model featuring a similar center tread but considerably more aggressive cornering knobs. Available exclusively for 700c wheels, I rode both the 40mm and 44mm versions — both of which measured 3-4mm smaller than their claimed width on multiple appropriately sized rims.

As you’d expect from the profile, the Raddlers roll fast on tarmac and unimproved terra firm, and the cornering bite is considerable on looser surfaces. I tend to gravitate toward knobbier patterns for all-surface riding, preferring a little extra traction off-road even if it costs me a little efficiency loss or a rumble on paved surfaces. In many ways, patterns such as the Raddler offer the best of both worlds. But especially in the narrower 40mm (more like 37mm) size, I found the Raddler to have a bit too split of a personality. Cornering on loose surfaces outpaces straight-line braking capabilities, and while leaning deep into a paved turn, they could feel a little wiggly as the taller knobs moved against the road surface. In fairness, it wasn’t a perfect control as I rode both models on different bikes and at different pressures (and for a bit with tubes in the 40mm size as I fought with recalcitrant rim tape). Still, probably due to slightly lower pressures and slightly more surface area, I found myself far preferring the 44mm model, which makes a near-perfect Missoula tire for this tester.  –Alex Strickland