It was quite a leap. With just two 500-mile tours under our belts, my husband Rich and I dove headfirst into a two-month cycling trip through the Canadian Maritime provinces. Our plans were to hug the Atlantic and round the Gaspé Peninsula to cycle the St. Lawrence Seaway, then turn south at Québec City to return to our starting point in New Hampshire. How hard could it be? Surely 2,400 miles was just more days of cycling.

Three weeks and 1,000 miles into the trip, we thought we were golden. We had our daily routine mastered and were progressing nicely up the coast of New Brunswick. Our bodies were honed into cycling machines, our bikes performed admirably, and we were on target to complete the trip before tourism season shut down in October.

Just days later, my outlook was not nearly as bright. I woke up to find my body gripped by a nasty case of the flu. It was a plight we hadn’t considered, a detail absent from our plans.

I insisted we keep riding. But by midafternoon, my body had reached its limit as hacking and feverish spells drained my energy, and I was eager to reach our camping destination for the night. Collapsing in the warmth of the sun, I conked out next to the picnic table while Rich set up camp. By dinnertime, I had no interest in cycling anywhere for a meal. I tried to decline food entirely, but Rich pressed a lobster roll on me from the nearby Dairy Bar on the wharf. Despite my protests, it disappeared. I recall nothing else from that evening.

Morning brought good news. Rich received word that we had a Warmshowers host for the night. Not only that, but they had invited us for dinner as well. The thought of a good night’s sleep in a soft bed along with a home-cooked meal immediately boosted my morale.

Leaving the campground, we expected to follow our usual routine — get an early start and put 20 miles behind us, then look for a place to eat. By that time, we would be ready for a big breakfast and a rest stop.

As a rule, we did not carry food or cooking gear. In our minds, the payoff in lightening our load was worth the risk of sparse restaurants. When our advance scouting revealed a dearth of food stops, we stocked up on essential rations to carry us through the barren area. If all else failed, I religiously carried a tube of peanut butter and a few bagels for emergency supplies. Just the sight of that tube turned Rich off, but it saved me from the evils of convenience store food. He had no such compunction about consuming plastic-wrapped, heavily preserved microwaved food. We were both happy with our choices. 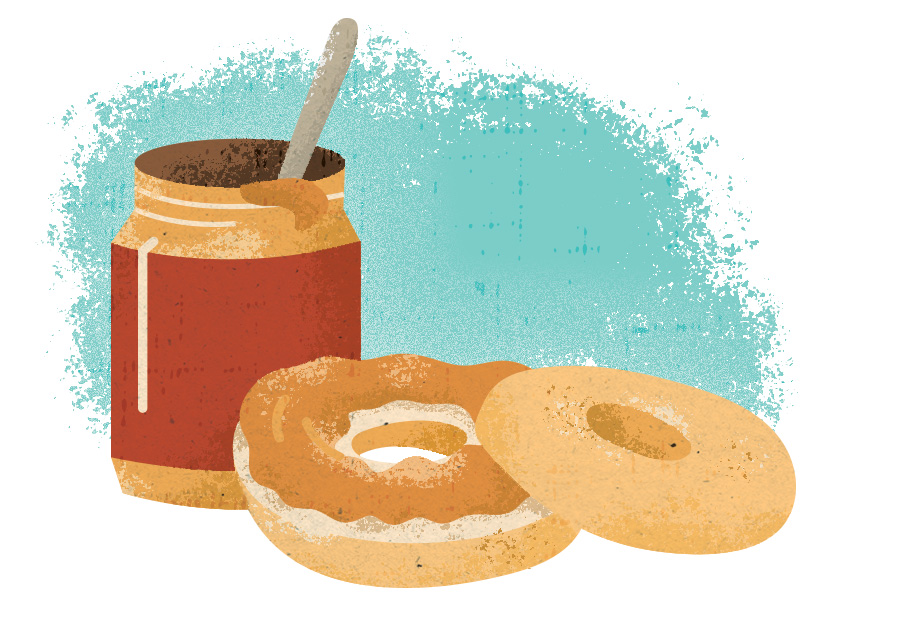 The morning started well enough. A visit to La Dune de Bouctouche took us out on raised boardwalks to observe the dunes and wetlands glistening in the sun amid the salty aroma of the ocean. The day warmed quickly, and cycling the oceanfront was easy with little wind. Thoughts of breakfast soon tickled my brain.

Twenty miles came and went as the morning waned. Google’s restaurant search failed us as the identified eating establishments never materialized. In fact, we found no services at all. Just rugged shoreline and natural beauty. Any reserves from our meager dinner had long since been depleted. Bona fide hunger set in. Intent on finding a real meal, I resisted dipping into my emergency stash. Our lack of sustenance soon triggered irritability bordering on outright grouchiness. Silence reigned. My eyes were blind to the scenic coastline as I obsessively scanned the roadside for an eatery.

At last a restaurant came into view. The sign said “Open” (our favorite four-letter word), and our bikes piloted themselves into the parking lot. Never mind that we were within half an hour of our destination. No matter that it was long past breakfast time and only lunch was being served. We needed food — now.

Sitting in air-conditioned comfort perusing the menu was a salve to our sagging bodies. Just looking at the choices and knowing that any one of them could be delivered to the place setting directly in front of me was comforting. I only needed to survive the agonizing wait for our plates to arrive. As soon as they landed, I dug into a thick club sandwich, munching uncontrollably on the salty chips I normally disdained. Rich made rapid progress through his juicy burger and heaping helping of fries. There was little need for conversation. Food was all we wanted. Sated at last, we left with full bellies and greatly improved dispositions.

Arriving in town a mere 30 minutes later, we spotted a local ice cream stand — the kind with the big cone out front and the window where you place your order. Despite our recent meal, it called to us and we stopped for a large cone each. This wasn’t just any soft serve. They offered a variety of mix-ins that a magic machine folded into the ice cream as it slithered down the tube before swirling onto our cake cones.  That Oreo ice cream combo tasted sublime after cycling under the hot sun and smoothly slid into the narrow remaining crevices in my already full stomach. 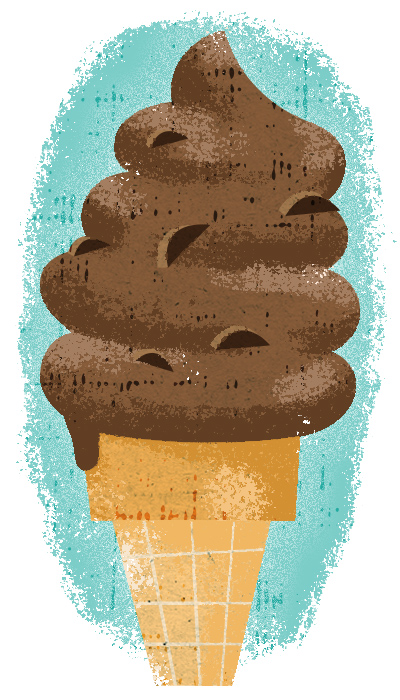 It didn’t take long to get to our host home a few miles out of town. We found the house easily but were mystified that no one was home. They knew we were arriving shortly after midday, as we had fewer miles to cover that day. So where were they? We could only wait and wonder. Within five minutes, a truck pulled into the driveway and out hopped Charles and Marthe. “Welcome! We’ve been out looking all over for you,” they exclaimed. “Please come right in. Dîner is served!”

Dîner? Rich and I looked at one another. Oh ... of course! We had entered the Acadian region of New Brunswick, which is fiercely French. Digging deep into our rusty high school French, realization slowly dawned on us. Dîner was their noonday meal, and we had been invited. Hustling us inside to the dining area, Charles and Marthe presented us with the grandest spread you can imagine. The buffet was laden with a succulent chicken casserole, baked vegetables in a rich sauce, a steaming potato dish, an assortment of salads, bread, and all the trimmings — all waiting for us.

Not wanting to offend our hosts, and without exchanging a single word, we each took a deep breath and modestly filled our plates. We found Charles and Marthe to be delightful and engaging, and easily fell into comfortable conversation with them as we seated ourselves at the table. Their French accents were charming even though they served as reminders of our folly. Politely nibbling our food, we began to relax and enjoy their company. Without realizing it, one forkful followed another. And then another. Before we knew it, we’d emptied our plates. Stealing glances at the remainders of the spread, it didn’t take much encouragement for us to head back for seconds. This time we helped ourselves to generous portions and cleaned our plates. Again.

We had no idea we were that hungry. But our more experienced hosts knew better. Cycling an average of 50 miles a day, we had not been eating enough to stay ahead of the calories that we were burning. Now into our fourth week, it was catching up with us. Our bodies craved food so intensely that we had no problem appreciating that gastronomic feast.

It wouldn’t be our last meal with them. Incredibly, we were hungry again at suppertime. And in the morning, Charles insisted on sending us off with his traditional breakfast for visiting cyclists — enormous omelets with fresh lobster. We didn’t leave a smidgen.

My body responded to the ministrations of our hosts, including the packets of cough drops and vitamin C they pressed on me. In fact, I’m certain I began to turn the corner following that visit. But we were most thankful for the lesson we learned about our need for fuel. It would be important to indulge in more caloric meals during the remainder of our trip. At least that time our voracious appetites saved us from our cultural faux pas.

It was not until two years later, when Charles and Marthe dipped down into Minnesota to stay with us on their cross-Canada cycling tour, that we finally divulged the truth and shared a good laugh. Then we plied them with copious portions of food, when dinner was served.

This essay originally appeared in the August/September 2019 issue of Adventure Cyclist magazine.

My favorite quip about bike touring is 5 square meals a day! Just eat whatever and whenever you want!

Good article, Molly. It brought back memories of Rich's blog from that trip. Best wishes for your adventure in Norway.

I truly enjoy the stores of your and Rich's trips Molly. As I have shared with Rich many times I strive to live my retirement life as active and adventurous as the two of you do. You have a wonderful family, home, and outlook on life. Please continue to share your experiences and the next tour that awaits you.

Great story. I find that eating low down on the food chain, the more energy I have. It follows the axiom, less is more in a bicycle. I don't tour but I cycle 700 - 1000 miles a month year around. Raw honey, and sprouted grains have kept my body stronger now then when in high school. I'm 64. With that said, eating like I do makes shopping suck. I have to special order.