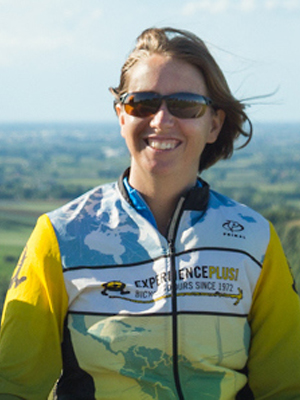 Maria Elena Price (known as M.E. by many of her friends) co-owns ExperiencePlus! Bicycle Tours, an international bike touring company founded by her parents in 1972 and a longtime corporate member, sponsor and lifetime member of Adventure Cycling. Maria Elena manages the company's stateside growth and development from its headquarters in Fort Collins, Colorado while her sister manages the European operations in Italy. Maria Elena holds an MBA from the Leeds School of Business at the University of Colorado in Boulder. She grew up as a tour leader running trips for her parents at the time in Italy, Spain and S. America. She hopes to pedal more in the USA in the coming years. In 2011 Maria Elena and Monica Price were both selected by National Geographic Traveler to be listed in their Top 10 Guides in the world feature. Active in the Adventure Travel Industry and motivated to continually consider how tourism impacts the world, in 2016 Maria Elena was honored to join the Adventure Travel Trade Association's Advisory Board for the next 5 years. 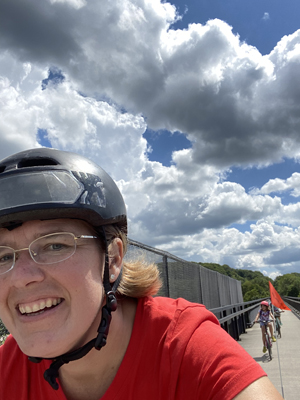 Elizabeth connected to Adventure Cycling in 2005, when she joined the bike world as an employee of the League of American Bicyclists, which frequently collaborates with Adventure Cycling. In 2006, Elizabeth joined Adventure Cycling on a cross-country trip from Seattle, Wash. to Washington, D.C. Elizabeth spent 11 years working in bicycle advocacy and leadership, ending with a three-year stint as Executive Director of the Cascade Bicycle Club in Seattle, Wash. Now happily back on the east coast, in Arlington, Va., Elizabeth is passionate about her pink custom Waterford touring bike (a gift from her husband and father when her first child was born), about making biking easier for everyone, and about going on family bike trips. Her family biked the C&O from their home to Pittsburgh in summer 2020, and attempted to bike the Erie Canal in 2021 (stopped, unfortunately, by a fierce wind/bike trailer crash). They have big plans for summer 2022, assuming COVID allows for international travel and biking! Adventure Cycling's ethos of inclusion, great bike routes, and community call to Elizabeth, and she is thrilled to serve on the board. When not volunteering locally or nationally on behalf of better bicycling, Elizabeth is the chief development officer for House of Ruth, a shelter for women and children survivors of domestic violence in Washington, D.C. She lives in Arlington, Va. with her patient husband, Jason, and their three adventurous children: Oliver, Allyson and Eleanor. 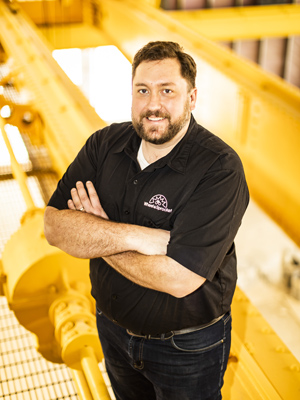 Noel is president of Wheel & Sprocket, a nationally-recognized, family-owned bike shop serving communities in Wisconsin and Illinois. Empowering and supporting bike travel and advocating for better bike infrastructure has been at the core of the company's DNA for over thirty years. In high school, his first job at Wheel & Sprocket was to provide mobile mechanical assistance to dozens of organized rides and tours each summer — it was through those experiences across the backroads of the Midwest that Noel learned the real joy that riding brings to us all. Noel firmly believes that bikes make the world a better place, so in turn, part of his responsibility is to work to make the world a better place for bikes. Noel is an avid bike traveler having rolled over roads and ruts, over mountains and through valleys in over thirty countries but loves calling Milwaukee, Wisconsin home. 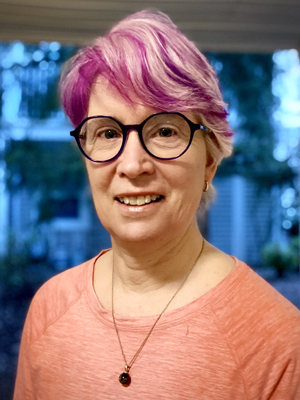 Joyce joined Adventure Cycling in 1998 and became a Life Member in 2010. Joyce has been leading tours and teaching new tour leaders since 2008. She values Adventure Cycling because we provide people with the tools to realize their own goals and dreams.

Joyce is a retired federal employee. She has worked with all levels of government and has extensive experience in policy development and issue resolution. “I am excited to serve on the Board because I have seen firsthand the empowerment and personal growth people experience through bicycle travel. I am honored to have the opportunity to help grow Adventure Cycling.”

You might run into Joyce at the grocery store, at her local state park on a bike overnight, or dipping her wheel after a cross country tour. If you can get there on a bike, count her in. 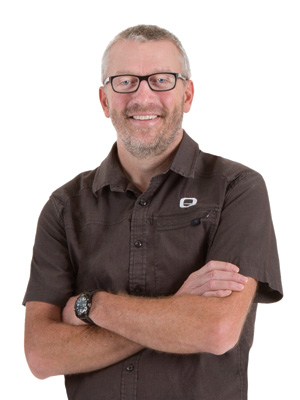 Rich is president of Quality Bicycle Products. He leads an organization that aside from being the largest bicycle parts distribution company in the country, is purpose driven and committed to advancing bike communities, advocating for bike infrastructure and safe places to ride, sparking advocacy efforts that increase ridership, and being part of building the industry’s first B Corp Certified bike company. Rich also serves on the Board of Directors at People for Bikes, an industry organization whose mission is to change the world through bikes. As a committed cyclist, he has logged thousands of miles with his wife and friends touring, racing, communing, and simply riding for fun. Most of his riding has been done in and around his home in Minneapolis and northern Wisconsin where he has a family cabin. ”One of my favorite family memories is the summer that my wife and I took our four kids on a self-supported tour down the coast of Oregon. Those types of family adventures help me understand why Adventure Cycling is such a special and important organization, and why I chose to serve”. 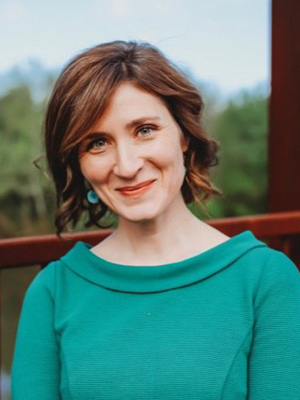 Jenny connected to Adventure Cycling after her first bike tour—a thrilling solo ride across Austria in 2014—and wants adventure-seekers from all backgrounds to experience the joy and freedom of traveling by bike. A long-time bicycle commuter, Jenny has been an advocate in her home of Chattanooga and served on the Board of Bike Walk Tennessee from 2011-2014. She has coordinated a range of bicycle education, policy, and programming events, including the inaugural Tennessee Bike Summit in 2012.

In her work, Jenny serves as the Strategic Capital Planner for the City of Chattanooga. In this role, she coordinates a $100 million annual capital budget, working across departments to plan and budget City investments in infrastructure, equipment, technology, and public spaces. She previously served as a Senior Planner at the MPO, focusing on multimodal transportation planning and funding at the regional level, while doing work with community outreach, grants, and open data policy.

Jenny grew up in a Bed & Breakfast, and values meeting new people through travel. Having traveled in more than 25 countries, Jenny finds adventure abroad, as well as at home in the Tennessee Valley. She also loves hiking, karaoke, and hosting friends. Jenny holds a B.A. in Anthropology from Lee University and a Master of Public Administration from the University of Tennessee at Chattanooga. She is a Next City Vanguard, a member of the Government Finance Officers Association, and has been featured in Planning Magazine. 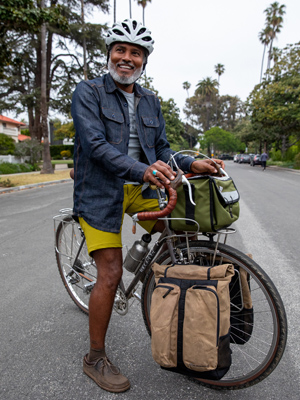 Erick Cedeño is a bicycling advocate, cyclo-tourist and the one-person-show behind Bicycle Nomad. Several years ago, Erick embarked on a bicycle tour from Vancouver, Canada to Tijuana, Mexico just to see if he could do it. The following year he traveled from Miami Beach, FL to New York City, NY. In 2014 and 2020 he rode from New Orleans to Niagara Falls, Canada which followed the historic path of the Underground Railroad. In the past 12 years he has traveled over 50,000 miles across the U.S on several bicycle tours. 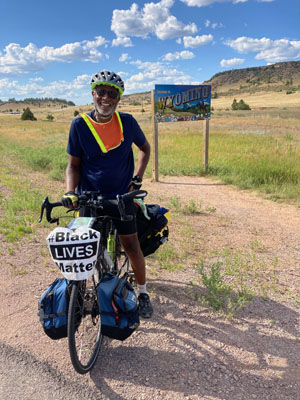 Scott Edwards is Alexander Agassiz Professor of Zoology and Curator of Ornithology in the Museum of Comparative Zoology at Harvard University. He came to Harvard in December 2003 after serving as a faculty for 9 years in the Zoology Department and the Burke Museum at the University of Washington, Seattle. His research focuses on diverse aspects of avian biology, including evolutionary history and biogeography, and disease ecology. His fieldwork has taken him around the world and he particularly enjoys making connections with and learning from scientists in diverse cultures. He has spent much of his career trying to make environmental science more accessible and inviting to BIPOC students in an effort to diversify the field. In 2019, he won (with Rich Kliman) the inaugural Diversity, Inclusion, Equity and Access Award from the Society for the Study of Evolution, a major scientific society focusing on evolutionary research and education.

Scott has been a bicycle enthusiast since his time in college, spending two summers co-leading trips for students in New England and Europe for the Student Hosteling Program in Massachusetts, and cycling solo around the Big Island of Hawaii and down the north coast of California. In the summer of 2020, Scott undertook a ~3800 mile, 76-day solo, unassisted bicycle ride across the US, meeting lots of interesting people and landscapes, and is now eager to help ACA fight for better bicycle infrastructure and access across the United States. 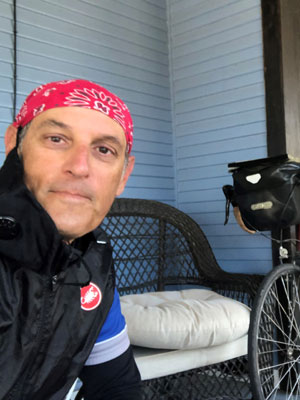 Rev. Dr. Daniel C. Kanter is the Senior Minister and CEO of First Unitarian Church of Dallas. Daniel started cycle touring on a one speed bike in India when he was 19 years old. Since then he has traveled across the country, around Wales, England, Ireland, France and his home state of Texas! He is passionate about bikepacking and cycling with his team The General’s Guard, a homegrown Dallas effort to support people with cancer.

Daniel came to Texas in 2001 from Boston and after holding the Associate Minister position he was called to the Senior Minister role in 2009. He was the President of the Senior Ministers of Large UU Churches as well as a part of a Unitarian Universalist Association task force to define ministerial competency. He has taught at Brite Divinity School and was the Harvard Divinity School Fellow in Residence during the Fall of 2017. He is the author of Faith for the Unbeliever, published by Skinner House Books in 2017. Daniel joined the Board of Trustees of Reading Partners of North Texas in 2020. He has served on a number of national nonprofit boards as member and chair and is excited to join Adventure Cycling’s Board of Directors in January 2023. 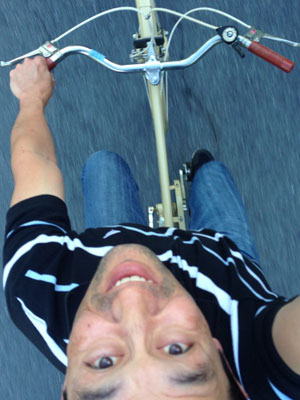 Richard "Ricky" Albores is a life-long traveler as the eldest of three sons to a father whose career with the US Agency for International Development took them on assignments around the world. Ricky's love for all forms of bicycling adventures began as a first-grader in Laos roaming the neighborhood streets on his Sears Free Spirit banana seat bike. His latest adventure was as an inaugural member of the Melanin Base Miles Gravel Race Team, a BIPOC group of racers, in 2022. He also graduated from the UC Berkeley School of Law and went on to join the U.S. Environmental Protection Agency in Washington D.C. where he has enjoyed a nearly 30-year career.

As a daily bicycle commuter, Ricky has logged tens of thousands of miles alongside vehicular traffic and is intimately familiar with what works and doesn’t to keep bicyclists safe on the road. He is also committed to dismantling car-centric infrastructure and advocating for complete streets that prioritize bike and pedestrian safety, as well as efforts that increase racial, gender, and ability diversity in the bicycling community.

Ricky recognizes that these daily "adventures" can feel challenging and scary to the ordinary person riding their bike, but it should not have to be that way. "Adventure Cycling is the kind of organization that can provide the support and resources to help all bicyclists feel confident and safe on their travels (short or far), and that is why I chose to serve."