In the maps' service directories I see Cyclists Only Camping or Lodging. What is that?

Cyclists Only Camping or Lodging is an accommodation type offered in private homes, churches, and community-run properties on or near the routes. These offerings range from camping in a yard to a bed indoors. Generally, these are places only extended to cyclists and not to the general public. There are exceptions. Each place varies so don't expect the same amenities from place to place. Sometimes a fee is charged — ask in advance. People offer these overnight spots as a way to help cyclists. Please be appreciative of their hospitality. In hopes of making your stay as pleasant as possible, see our blog series on Bicycle Travel Etiquette.

I'm doing a tour on one of your routes in 2 years. When is the best time to purchase the maps?

We generally update the maps every three to four years. We suggest that you wait as long as you can before the trip to buy the maps, to assure that you have the most current maps available. We realize that some cyclists like to buy the maps well ahead of their trip to start their planning. If you do this, make sure to download the map updates and corrections for each section of your route. The map updates and corrections are updated throughout the year so you'll want to check online just before you leave or even during your ride for longer trips as the paper version that came with your map purchase may be out of date.

How do I know when my map was printed?

How do I know if I have the most current map available?

The month and year of update for each map section is available on our Current Map Versions page.

I have older maps. Can I still use them for my upcoming trip?

Over time maps become less useful because things change. Each year Adventure Cycling's Routes and Mapping Department creates map updates and corrections for every map in the Adventure Cycling Route Network. With the help of riders like you, we receive updates on routing, services, and contact information. Until we can reprint the map with the new information, we verify the suggested changes and publish map updates and corrections. These map updates and corrections are available online and are shown for a map's previous three versions. If your map is dated earlier than the three listed versions, we recommend purchasing a new map so you are current with all the service changes and other updates. Read our blog post Can I Use this Old Map? for things to consider when making your decision about buying new maps.

If I go from west to east, will the jet stream blow me the whole way across the country?

Actually no. The jet stream does indeed blow from west to east, but it is generally at an altitude of 30,000 feet. The wind patterns on the ground are affected by a number of factors and can cause the wind to blow from any and every direction. The majority of cross-country riders we talk to seem to have an equal number of headwind and tailwind days, with crosswinds being more prevalent. Note that crosswinds will often feel like headwinds and a tailwind can feel calm. However, there is one of our routes where the wind seems to be consistent. During the summer months on our Pacific Coast Bicycle Route, the winds are predominantly out of the north, so riding from north to south is advisable.

Can I stay in motels every night while riding across the country?

With very careful planning it is possible to stay in motels every night on all of our cross-country routes. You have to be flexible by having some days that will be longer and some that will be shorter. Hotels, motels, and B&Bs are listed on the backs of the maps with phone numbers. It is good to call a day or two ahead to make sure that they are still open and have rooms available.

Can you map a route for me?

No. The Routes and Mapping Department does not do custom routes for individuals. The Adventure Cycling Route Network is what we offer for mapped routes. Each state has a bike/pedestrian coordinator in their department of transportation who should be able to help you plan a route. Many states now publish their own biking maps, but they vary greatly in the type of information they provide.

I want to go from city A to city B. Do you have maps?

We have mapped over 50,527 miles of cycling routes in the United States. It is best to check out the Adventure Cycling Route Network page to see where our routes go. We do not always go into big cities, so you may want to use our maps for portions of your ride, and use state or regional maps for the rest. You may also wish to use a U.S. Bike Route in your planning.

The Great Divide Mountain Bike Route seems pretty remote. How do I get there?

There are many options for beginning and ending a tour on the Great Divide Mountain Bike Route. We have compiled a list of shuttle services (PDF) available along the route. There may be others who offer this service as well.

Are there maps for the North Star tour?

The "North Star" is the name of one of our tours, and we do not provide maps for this tour route. From Missoula, Montana, to Jasper, Alberta, our Adventure Cycling tours use the Great Parks North maps. From Jasper northward, you can refer to a publication called The Milepost: Alaska and Northwestern Canada, an annual travel guide that gives highway and road descriptions in relation to milepost markers.

When is the best time to ride a specific route?

Late spring to mid-fall in the north; all year in the south. Caution: Hurricane season is from June 1 to November 1, and can close the Outer Banks Alternate.

Arkansas cyclists suggest that autumn and spring are the best times for riding. The dying leaves of autumn and the flowering dogwoods of spring are accompanied by moderate temperatures and flowing creeks.Floods are most likely in the spring. Summers are hot and humid.

This route is best ridden in the spring with a departure in mid-April, going either eastbound or westbound. This will allow most cyclists to make it through the highest humidities of the midwest and high heats of the desert before June and through August. If departing in autumn, mid to late August into early September should allow cyclists to clear the mountains before heavy snowfalls as well as avoid the heat and humidity.

This route can be ridden from mid-spring to mid-fall. Expect high temperatures and humid conditions during the summer. Watch for tornadoes in the spring. Due to changing local conditions, it is difficult to predict any major wind patterns along the route.

All year around. Caution: Hurricane season is from June 1 to November 1.

Early summer to mid-fall. Caution: snow can occur at any time in the higher elevations along the route.

Early summer to mid-fall. Caution: Snow can occur at any time along the route. If it is a heavy snow year, high-elevation roads in the north may not be open until late June or early July.

Early summer to mid-fall. Caution: Snow can occur at any time during the summer in the Rocky Mountains. Due to snow, Going-to-the-Sun Road in Glacier National Park in Montana is only open through certain dates. Call the Park at (406) 888-7800 or visit their Current Road Status page.

Late spring to mid-fall. Caution: Snow can occur at any time during the summer in the Rocky Mountains. The highest point on the route is Lemhi Pass, 7,323 feet.

Early spring to late fall in the north; all year in the south. Caution: heavy winter rains cause flooding and mud slides and may close roads, especially along the coast.

Late spring to mid-fall. Caution: Due to snow, State Route 20 in the North Cascades National Park in Washington is only open through certain dates. Call the Park at (360) 856-5700 or visit their Road Status and Conditions page. Visit the CalTrans Mountain Pass Closure Dates page to view historic closure dates for Monitor and Tioga passes in California.

Early fall to late spring, and into summer in the east. Caution: Snow can occur at any time in the higher elevations in the Southwest, with the highest pass in New Mexico being over 8,000 feet. In the southeast, hurricane season is from June 1 to November 1. See also: When to Ride: Southern Tier blog post.

All year around, but spring is best for viewing the wildflowers.

Late spring to mid-fall. Caution: snow can occur at any time during the summer in the Rocky Mountains, with the highest pass in Colorado being over 11,000 feet.

Late May to early June, and September into mid-October, depending on weather due to high elevation.

Late spring to mid-fall. Due to snow, State Route 20 in the North Cascades National Park in Washington is only open through certain dates. Call the Park at (360) 856-5700 or visit their Road Status and Conditions page.

Early summer to mid-fall. Caution: Snow can occur at any time along the route in the Sierra Nevada and in the Rocky Mountains. The highest pass  in California is 8,573 feet, and in Colorado at 11,312 feet.

Which way is up? Or, the north arrow explained.

The north arrows on Adventure Cycling maps are sometimes a source of confusion, but there is a practical reason why we can't always put north at the top of the maps. In this illustration on our Map Features page, we have two index maps for section 4 of the Atlantic Coast Route. The one on the left shows the map panels as they exist. In the other, panels are drawn so that all are oriented to the north (and still fit into a handlebar bag window). The 373 miles between Richmond, Virginia, and Wilmington, North Carolina, that we cover now in 12 map panels would require 19 map panels. In addition, the 248-mile Outer Banks Alternate, which we squeeze into four, double-map panels, would now require 10 map panels. On north/south routes, it is evident that we would have to double the number of map panels we currently need to do a route. This would, in turn, double certain production costs and make the maps more expensive.

How many days does it take to ride X number of miles?

Each individual and group will need to first determine how many miles a day they plan on riding (our road group tours average 60 miles per day). When you have figured this out, take the total miles for the ride and divide it by the miles per day; this will give you the number of days it will take to complete your ride. Remember to add in a few layover or rest days, and keep in mind that some days you may exceed your expectations and some days you may not. (Total miles to be ridden/miles per day + layover days = # of days it will take to ride.)

I'm going to ride across the country by myself. Will I be safe?

There are advantages to riding on our routes as far as safety is concerned. Other cyclists will also be on the route. Because these routes are established, folks along the way are accustomed to seeing cyclists. People are generally very kind to cyclists, but it is important to trust your intuition and use common sense. Keep in mind that road conditions and traffic vary across the country. Taking our Intro to Road Touring course or a bike maintenance class may help to boost a cyclist's confidence before embarking on a long tour. 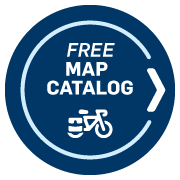