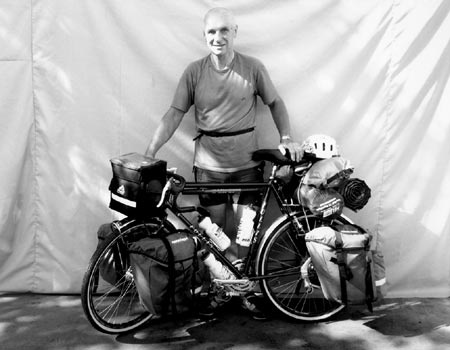 Pierre Badeau, of Soucieu En Jarrest, France, was posing here for our camera a second time in the summer of 1993 as a member of the North Star group that left Missoula in June headed for Alaska. The first time we photographed Adventure Cycling member Badeau was in the summer of 1991, when he was riding the TransAmerica Bicycle Trail by himself, at the age of 61. A retired manager of a camera shop, Badeau shot 1,200 color slides during his solo tour that year, 500 of which he used in slide shows for relatives, friends, associations and schools when he got back home.

"Everybody tells me they discover another America, very different of what is shown on TV or movies," said Badeau.

Flying home in the wake of his North Star expedition, Badeau reflected on what he had seen, and felt, during the long weeks of the tour.

"My head is full of the happy times of the trip," wrote Badeau. "The high mountain environment of Logan Pass; the wall of water; the Mt. Robson's crown of cloud and his great ice walls; the crossing of the Yukon Border; the wilderness of Robert Campbell Highway; the fisher I met at Little Salmon Lake who gave me a very fresh huge lake trout; Denali Park and the Great Show of the Big Mountains; the arrival in Anchorage."

Badeau realized that, thinking back to his 1991 solo ride, he regretted not being able to share the "great moments" with anyone. He realized that he valued one thing most from his North Star experience.

"Above all, I remember the warm fellowship among the members of the group," wrote Badeau. "The sharing of the great moments, but also the hard hours. Therefore I can say that this trip is a full achievement for me, and I hope, for my friends.