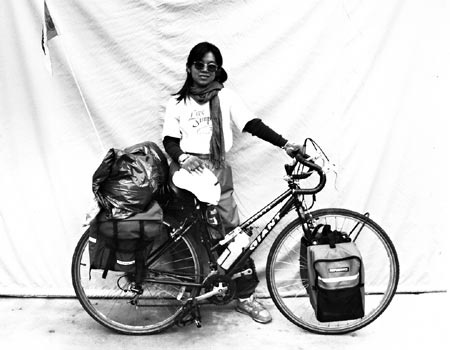 Anitra Moser-Poungsuwan, an Adventure Cycling member from Bangkok, Thailand, and her husband Yeshua, took their first cycling trip -- from San Francisco, California, to Providence, Rhode Island -- in the summer of 1994, stopping in at Adventure Cycling headquarters on June 16 of that year.

The couple used parts of the TransAmerica Trail, Canada to California and Iowa to Maine bicycle routes on their 4300-mile journey, making the entire distance without any technical difficulties ("...not a flat tire, bent spoke, nothing..."). They averaged 40-60 miles per day, not that they were concerned with such mundane statistics. Everyone else seemed to be, however.

"One of the things that constantly amazed us in meeting other cyclists was how goal-oriented they were," wrote the couple. "Immediately after asking us our 'goal,' we were asked how far we went each day. After we confessed our rate of travel, other cyclists would exclaim 'You're doing it right!' before hurrying off."

The couple cites pedaling along the Lochsa River in Idaho (on the TransAmerica Trail) and riding the C&O Canal along the Potomac River for four days as the high points of their trip across the country. They also cite a couple of big mistakes they made: riding north up the West Coast and crossing Wyoming's Big Horn Mountains on Alternate Highway 14. Headwinds plagued them on the coast, and 10% grades in the Big Horns made them feel as if they were climbing out of the Grand Canyon.

After returning to Bangkok, Anitra and Yeshua will cycle to Singapore and then to New Zealand some time during the next two years.