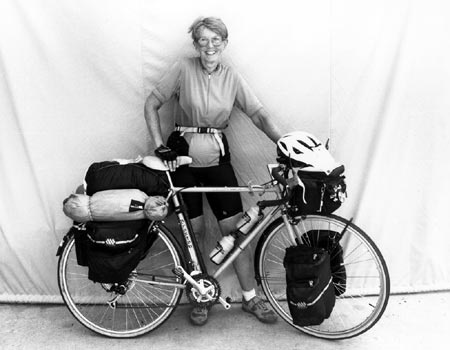 Long-time Adventure Cycling member Shirley Braxton, 67, and her late husband Sam Braxton began planning to ride across the United States in the early ‘70’s, before the TransAmerica Trail even existed. But the demands of raising a family and running a business forced Shirley and Sam to postpone their trip.

Instead, the Braxtons spent more than a decade helping others who were realizing their TransAmerica dreams, as Missoula's Braxton Bike Shop became one of the most popular watering holes along the Trail. Sam quickly became known as an expert wheelbuilder and framebuilder, sharing his extensive knowledge of bicycle touring with Adventure Cycling members in "Bike Stop," a column written by former publications director Gary MacFadden (now executive director) for BikeReport magazine (as Adventure Cyclist was formerly known).

In 1988, Sam Braxton died at the age of 62 after battling cancer for a year. With Sam's death, Shirley gave up any idea of riding cross-country. She and Sam had always been a team. She couldn't conceive of doing the TransAm Trail without him. Then, in 1993, a friend of Shirley's named Colleen Hunter gave a slide show about the TransAm tour she had just completed with Adventure Cycling.

"After seeing Colleen's slides, I decided this was how I would spend my summer of 1994," said Shirley. "Unfortunately, my trip was curtailed in Kansas when I touched the wheel of the cyclist in front of me, hit the pavement and fractured my collar bone and four ribs."

Curtailed, but not stopped. In 1996, two years after her accident, Shirley rode from Kansas to Missoula with Hunter, and from Missoula to Florence, Oregon with Marge Samsoe, another good friend from Montana, completing her TransAmerica tour.

"Would you believe that when we reached Florence we couldn't find the Pacific Ocean?" said Shirley. "I had visions of seeing this extensive body of water immediately upon our arrival in Florence. Not so! We finally asked directions to the nearest beach, which was four miles away."

Elusive ocean notwithstanding, Shirley had realized her long-held dream -- and had finished what she and Sam started so many years before.