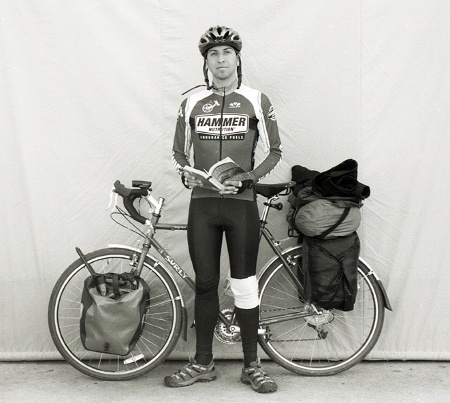 His destination was Boston and his early start meant he was the first of more than five hundred cycletouring visitors to the Adventure Cycling office in Missoula in 2010. He walked in our front door on April 14.

He chose to launch his tour early because in mid-July he was scheduled to begin a teacher preparation program. “Someday I’ll be an English teacher and I will tell my students stories of my trip across America, and I hope they will be inspired to set their own goals and find their own adventures.”

“Currently, I am reading Angle of Repose by Wallace Stegner. This Pulitzer Prize-winning book is one of the more important and influential pieces of America fiction; certainly of the last 50 years. It is a story of westward pioneering maturity and family growth, along the lines of East of Eden, by John Steinbeck. Both are fitting novels for journeys across America.”