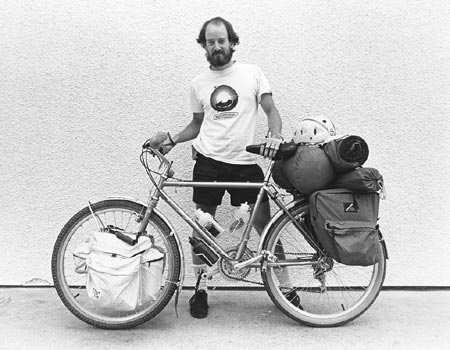 We decided to dig a photo of our old friend Brent Garrett out of the archives, who in 1983, at the age of 23, led a 68-day, 3200-mile North Star tour from Missoula, to Anchorage, Alaska for Adventure Cycling (Bikecentennial, back then). He rode his newfangled Stumpjumper Sport. It was one of the first mountain bikes we saw to be used for touring.

"The mountain bike was great," wrote Brent. "It's a workhorse when it comes to carrying extra weight, which is important when you have to carry food for three or four days. The mechanical problems were few, no flats or broken spokes."

Brent did recognize that his mountain bike was slower than a conventional touring bike, by one or two miles per hour he reckoned, but felt that the Stumpjumper was perfect for the North Star, considering there were more than 1,000 miles of riding on unpaved surfaces.

"The greatest thing the mountain bike offers is freedom," he concluded. "Bad roads, potholes, mud and other maladies are no longer obstacles, but rather challenges. On the most gonzo of downhills, I was able to let loose, while all others had to brake."

He also liked the upright riding position of the Stumpjumper, reasoning that on a trip with "so much to see" it made it even easier to look.