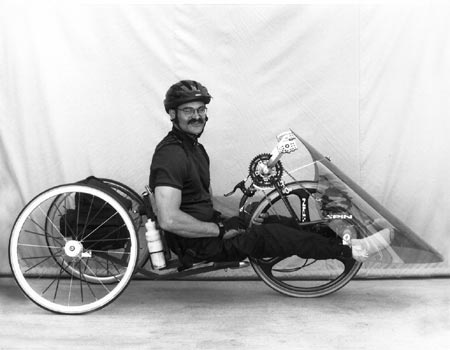 Just after this photo was taken Keith Barney, 38, of Alpine, Utah, completed the 1997 edition of the Tour of the Swan River Valley on a three-wheel hand cycle. The tour is a two-day, 220-mile event beginning and ending in Missoula, Montana. Keith, who had competed in 99 wheelchair road races, called the tour "a good warm-up for an attempt at the 24-hour record for hand cycling." The record currently stands at 240 miles.

Keith was joined on TOSRV West, as the Swan River ride is known, by two other hand cyclists, one from Salt Lake City, Utah, and one from Butte, Montana. All three men completed TOSRV without being sagged.

"The course was harder than I imagined it would be, but that was part of the mystery of signing up," wrote Keith. "The newness and mystery just enhanced our excitement. I should have expected no less from a course that winds its way through the Rocky Mountains."

Keith is serious about making an attempt on the 24-hour hand cycling record, perhaps aboard a hand-cranked recumbent, but he also sees less competitive cycling pursuits in his future. Such as riding across the country on a tandem being made by a fellow hand cyclist who is starting a hand cycle company. The tandem will accommodate both Keith and his wife, Trish, who is not disabled.

"It may look funny, but I think we can come up with something that works well," said Keith. "We want to help to dispel the myths that society harbors toward the disabled."

While Keith was riding TOSRV, Trish was completing her first metric century on a newly purchased Klein.

"When I spoke to her on the phone, she was excited to tell me all about it," said Keith. "She is now sure that she can join me on next year's tour. Wherever I choose to run off to, she wants to go along."

In fact, Keith is certain that a cross-country tour is in the future for his wife and him. They are already riding together on a regular basis.

"She couldn't keep my pace on her old mountain bike. Now that she has the Klein, I am stretching to keep up with her," said Keith. "It really feels good."