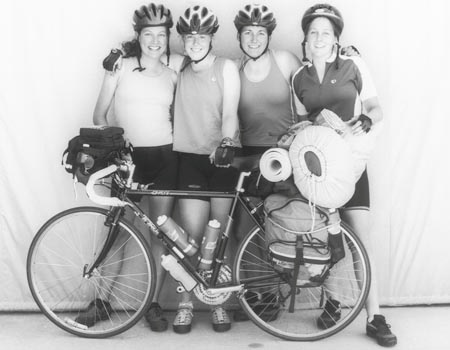 It’s the TransAmerica Trail at its best — as the venue for a journey of adventure and discovery by four young women, two of them sisters, with the foresight to seize a moment in their lives that may well be unique, a moment when they are free to wander across the nation without obligations (except to call home every night) and without a schedule.

The 1999 TransAmerica crossing of (left to right) Emily Hodgon, 22, Katherine Martin, 20, Katie Hodgon, 19, and Barbara Francis, 20, was instigated by Katie Hodgon, who asked her sister in the fall of 1998 to do the trip during the coming summer of 1999. At first, Emily thought the idea was crazy, but then, recalling a three-week, 1000-mile tour of Nova Scotia that she had done with an American Youth Foundation camp based in New Hampshire, she decided to do it. Kate and Emily recruited friends Barbara and Katherine to go along, and that’s just about where the planning stopped.

“We met once over Christmas break to plan, but really didn’t do much more than the essential planning after that,” said Katie. “We enjoyed not being on a schedule.”

There was at least one area, though, in which Katherine Martin thoroughly prepared herself — she brought along eight pairs of socks.