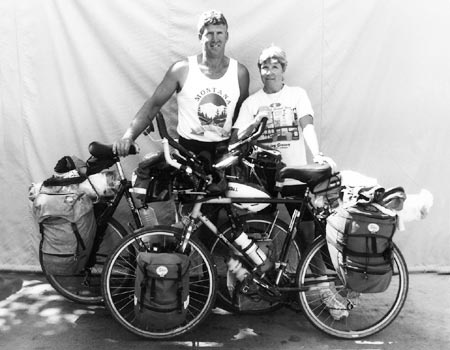 New Zealand sheep farmers Don and Pam Morrison cycled across the United States during the summer of 1995 on the TransAmerica Bicycle Trail. Pam was a little skeptical when her husband suggested the trip. After all, Don was the "keen cyclist" of the family having biked from Banff, Canada to Dallas, Texas in 1990.

"After some gentle persuasion, I decided there was no real reason why I couldn't do it and set about to do some training," Pam said.

The training paid off, as they completed their 4,300-mile east to west journey in 80 days. "We had no problems with bikes, bodies, or weather," Pam said, "I still can't believe that I actually biked that far."

Don found cycling with Pam better than solo touring. "I'm glad Pam was able to join me on this ride and we can talk about the many enjoyable places we visited," he wrote recently.

The quiet backroads of the TransAm Trail reminded Don and Pam a little bit of their home in Mayfield. "Where we farm in New Zealand is very rural," Don said. "We enjoyed biking through small town America."

They especially enjoyed the wildlife they saw along the way, including moose, antelope, buffalo, foxes, and raccoons. Their closest contact with an animal came when a "cheeky raccoon" helped itself to a bag that was tied to one of their bikes.