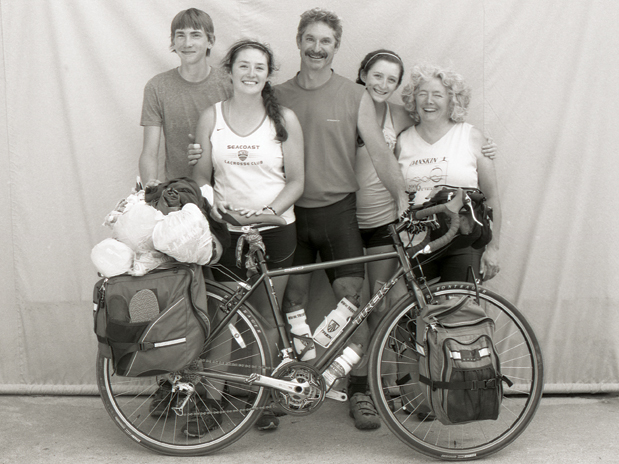 Kym and Christine’s daughters, Wensday and Carly, and their nephew Jordan had grown up seeing a wall of photos memorializing a cross-country journey the couple had taken in 1984.

“As our children grew and looked at those pictures every day, we would tell them stories of our bicycle adventure and kid them that we would be doing that same journey with them some day. The years sped by and suddenly we realized our oldest daughter would be leaving home in two short years, embarking on a life of her own. We decided it was now or never,” Christine said.

Planning a three-month bike tour becomes much more difficult when you have a house, jobs, pets, and school to worry about. Training was hampered by school and social commitments. Denied their requests leaves of absence, both adults had to quit their jobs and hope for the best upon their return, plus they had to be home in time for band and soccer camps.

“The diminished time made for more stress and less flexibility on this trip, often making me feel like a Roman ‘coxswain,’ yelling, whipping, and pushing the group to make time, get up earlier, take shorter breaks, and take fewer rest days,” said Kym. As hard as they tried, the family realized in Montana that they’d never make it in time, so they hopped on Amtrak and sacrificed the ride across North Dakota.

Between tough hills, long nights, and improvised camping spots, says Wensday, “There were some nights that we found ourselves sleeping behind a Kohl’s, McDonald’s, or Dollar Tree. Those were some of my favorite nights because it felt so spontaneous!” Then there were the bizarre finds on the side of the road. “One time, we stopped to see what it was and it happened to be two semi-automatic rifles. We looked at them for awhile before throwing them back in case they were part of a crime scene,” remembers Jordan. The end of the journey was hard-won but all the sweeter for it. Upon reaching the end, Kym remembers, “I had been fairly certain I would be justified in driving us so intensely to this point, and was incredibly grateful that I was not wrong.”