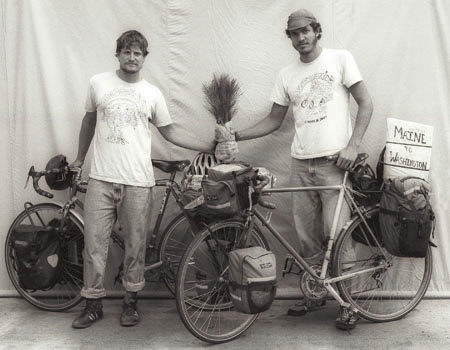 When Steve Cash and Ben Kelchlin started talking about bicycling across the country, they wanted it to be more than just a bike trip; they wanted to leave their mark as well. So they decided to plant trees along the way. They made their trip in 2007.

Just planting any type of tree along the route wasn’t going to work. Steve learned from his father, who is an arborist, that the survival rate for trees planted in the wild is just seven percent. So Steve and Ben spent considerable time researching which non-invasive species of tree would work in a particular environment. For instance, at their starting point in Maine, they planted a lot of red maples, in Montana it was ponderosa pines, and in Washington they planted a few giant sequoias.

To improve the odds that the trees would thrive, they coordinated the plantings with townspeople en route, hoping that they would become caretakers of the trees, helping to ensure their survival.

Before the trip, they anticipated planting around 100 trees (103 was the final total), but they knew that they couldn’t take all of these with them at once so, as Ben was readying their bikes for the trip he fashioned a Styrofoam cooler to the top of Steve’s rear rack to carry the trees. They started out with 20 trees in the cooler, and every few weeks had another 20 shipped to them at towns along the way.

Both Ben and Steve say that one day they would like to ride the route again and see which trees survived. They’ll have a long time to do it, as giant sequoias can live for over 3,000 years.