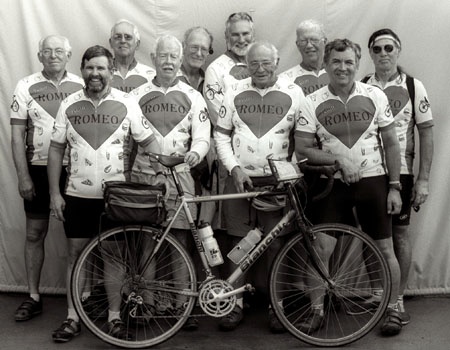 Romeo, Romeo, wherefore art thou Romeo? No, not that Romeo, there is no Juliet here. Romeo is the name of a group of cyclists that has been following the path of two other historical figures famous journey, Lewis and Clark.

So where, and what, is ROMEO? If it’s summer time, they are most likely on the road, as they have been during the past ten summers. ROMEO is an acronym that stands for Retired Old Men Eating Out. When this photo was taken, they were on the last leg of a four-part journey following the route of Lewis and Clark. Starting from Pittsburgh in 2003, they rode to St. Louis. In 2004, they rode to Bismark, North Dakota, then to Great Falls, Montana, in 2005.

For their last leg to Astoria, Oregon, they added a bit of a variation to their westerly direction. They opted to ride that leg from west to east, from Astoria to Great Falls. And if you’ve ever ridden along the Columbia River through the Gorge with those howling westerly winds, you’d prefer to ride that way as well.

While they did follow the Lewis & Clark Bicycle Route, they did it in a bit more comfort than the explorers. We already know that they like to eat out, but they also have an RV that follows them with their luggage, a bike trailer, food, and even doubles as their lunchroom and emergency shelter. (I bet the Corps of Discovery would have loved an emergency shelter.)

And there are no plans to quit anytime soon. Tom Schlueter (front row, second from the right) says, “I sincerely believe that the physical exercise and the companionship of my fellow bicyclists has given me a youthful and positive attitude.” And if you wonder where ROMEO is now, these (mostly) retired cyclists are probably out together at a restaurant around their hometown of Akron.