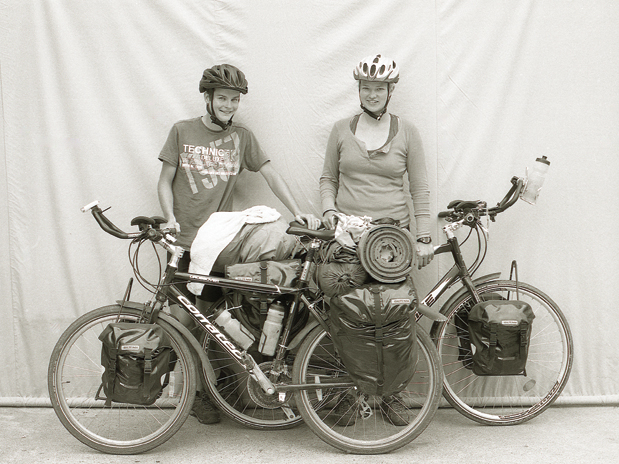 Newlyweds Johannes and Rebecca Bulfin of Birr, Ireland, didn’t do things by half when they decided to combine their first trip to the U.S. with their first bike tour. When they arrived in New York City and set out on their journey to Portland, Oregon, their only training had been cycling the four-mile commute to and from college, and their route was put together using Google Earth and handwritten directions. Their second day found them sweaty, sore, exhausted, and lost in the Appalachians. Luckily, they met the first of many “trail angels” they would meet on their journey, a man named Bill, who gave them his old map of the area so they could find their way. Then they acquired some AAA state maps.

Unfortunately, this burst of luck did not last. They were completely blindsided when they woke up after camping near a reservoir in Pennsylvania to discover that a single raccoon had broken into their gear and had eaten an entire cake, pepperoni sticks, cream cheese, and almost all of their granola bars. That morning was one of only two times during their trip when they considered calling it quits. They persevered, however, and things began to get easier. Their aches and pains faded to vague discomforts as they acclimatized to life on the road, and their map selection improved with the acquisition of local and state maps. The couple eventually found their way to Adventure Cycling and “… realized that in order to get through life safe you have to have the proper maps!”

Maps weren’t the only gifts bestowed on the couple; perhaps most unusual was a carpet to help keep them warm as they crossed the Rocky Mountains. It was many kind gestures like this that ultimately helped the couple accomplish their goal. “We reached Seaside, Oregon, as the sun was setting, a beautiful end to the journey of a lifetime,” Johannes remembers, “but instead of fulfilling my appetite for adventure, this trip has only ignited the fire of exploration and discovery that will take a lifetime to fuel.”