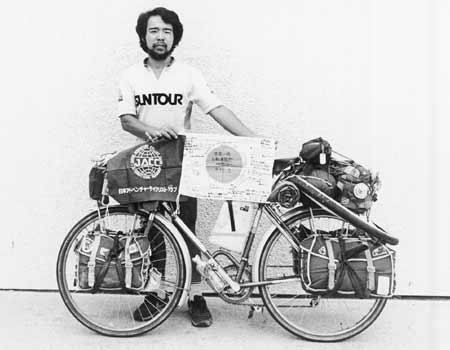 We reached all the way back to 1986 for this photo of round-the-world cyclist Shinobu Nakamura, a member of the Japan Adventure Cyclist Club (JACC). Nakamura, who listed his destination as "every continent," had as good a reason as we've seen for riding around the world.

"There are a lot of things on the earth," he said. "I wish to see as much (as possible) with my own eyes and to feel with my own hand and skin, not by reading magazines and newspapers and watching TV and movies."

Nakamura saw some of those sights from a unique perspective. In Australia, for example, he carried his bike to the top of Ayer's Rock, which apparently is a tradition among Japanese touring cyclists.

As a member of the Japanese Adventure Cyclist Club, Nakamura was on a mission to spread peace and goodwill throughout the world, and judging from the newspaper clippings and photos he sent to us during the course of his travels (including a particularly charming shot of the Japanese cyclist with a class of first graders in Hiran, Ohio) it looks like he did a decent job of it.

After riding the TransAmerica Trail, which he described as "really nice," Nakamura sent a postcard to Adventure Cycling art director Greg Siple (the force behind the National Portrait Gallery), stating that some day he wished to develop an "Around the Japan Bicycle Trail." First, however, he had the Yukon, and Central and South America to travel.

Although Greg still receives Christmas cards from Nakamura, he's not sure just how far the Japanese cyclist ultimately went. No matter. We'll go with Nakamura's parting thought on his feedback form: "To be continued."