Out Of Town Guests 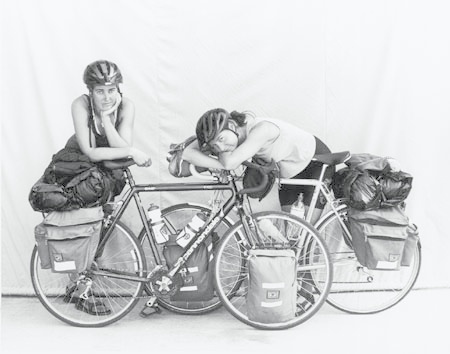 Where have all the weirdos gone? That’s what Marion Rhodes, 28, of Dunedin, New Zealand wanted to know after riding across America last summer with her friend Victoria Johnstone, 27, also of Dunedin. Apparently the pair received repeated warnings from concerned locals to “watch out for the weirdos” as they made their way from Bar Harbor, Maine, to Vancouver, British Columbia, via Jackson Hole and Yellowstone National Park. It was their first bicycle tour ever.

“I think they must have been locked up for the summer because we didn’t meet a single one,” said Rhodes of the weirdo factor.

In fact, said Johnstone, America and Canada treated “these two Kiwi lassies” very well, as the pair met lots of people, saw lots of things, and were “barked at by lots of dogs.”

“We only feared for our lives once on the whole trip, due to heat rather than any hominid interference,” said Johnstone.

Traveling 5,000 miles in 91 days, the pair is now sold on bicycle touring (“Self-propulsion rocks!!!” writes Rhodes) and remain perplexed by only one aspect of their trip – the language barrier.

How many ways can you say ‘Maine?’” asks Rhodes in what is likely a rhetorical question. As in the following conversation, repeated several times during the trip.

“‘Where did you girls start cycling?’”

Sure, Maine. (Before we judge our fellow countrywomen and countrymen too harshly, we really should hear Victoria and Marion speak.)

Flats, on the other hand, were not a problem for the pair from New Zealand, until they neared the end of the trip that is.

“We both were puncture-free until about the 3,680-mile mark, when Vic had her first,” said Rhodes. “She went on to have four more; my record was one puncture in 5,000 miles!”

With a record like that, these two “Kiwi lassies” shouldn’t wait too long before taking on their next tour.