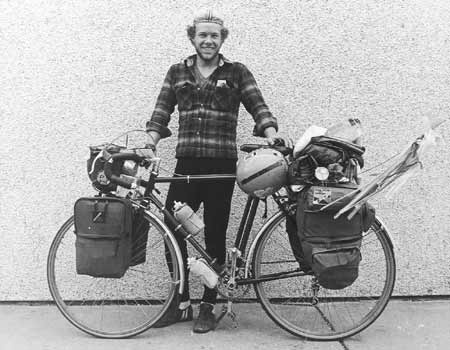 Ah, the early ‘80’s. Those were the days -- when America was a simpler place; a kinder, gentler place. Actually, we don't remember anything about the ‘80’s. But the photo you see above, of one Mark Wheeler Jr., was taken in 1982, when Wheeler was a fresh-faced 27-year-old lad, striking out on his bicycle from his then hometown of Binghamton, New York, for Vancouver, British Columbia.

Wheeler first caught the cross-country bicycling bug in 1975, when Adventure Cycling (known at the time as Bikecentennial) was soliciting leaders for the TransAmerica '76 ride. He left his job as a buyer in an electronics firm in '82 to realize his dream, planning to return to school and study physical therapy after he was done.

Like many cyclists, Wheeler was preoccupied with food during his cross-country jaunt, letting us know that the best chocolate malt was in Clay, Kentucky, and the largest pancakes were in Darby, Montana -- just down the Bitterroot Valley from us here at Adventure Cycling headquarters.

The high points of his tour, said Mark, were going to see "Porky's" (one of those high-brow ‘80’s flicks) with Laura Cook, a mail carrier he met in Eureka, Kansas; and eating sourdough pancakes at Dornan's, an open-air restaurant at Moose Junction in the Teton Valley.

At last report (in 2002), Mark was in fact a physical therapist, living in Syracuse, New York. He's still riding, although he's done very little touring since "the big trip." Still, says Mark, "Cycling is my fountain of youth."