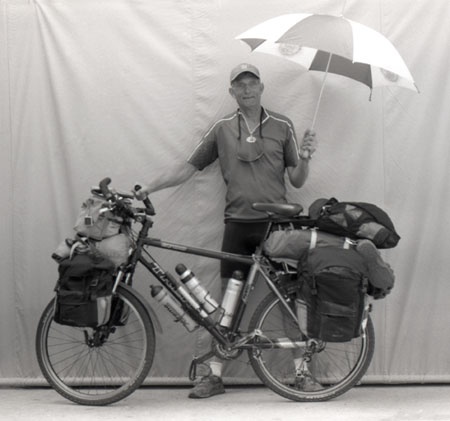 Hans van Velze rolled into our office on June 4, 2009, on his way across America on the Transam Trail. He is a 61-year-old dentist from Apeldoorn, Holland.

He found his crossing to be a delight, despite an illness that laid him up for a few days in Rawlins, Wyoming. At the beginning of his trip, when asked why he was undertaking the journey, Hans would mention the great landscapes and his love of biking. But in the end, he found his greatest satisfaction was meeting and getting to know people along the route. “That’s what it’s all about: meeting the people, talking with them – that made the biggest impression on me.” Hans was often surprised by the hospitality offered to him, “like the First Baptist Church in Goreville, Illinois, where after a soaking wet day we knocked on the door and were welcomed in. They even provided dinner later that night. Unbelievable!”

It isn't clear why he brought his umbrella.