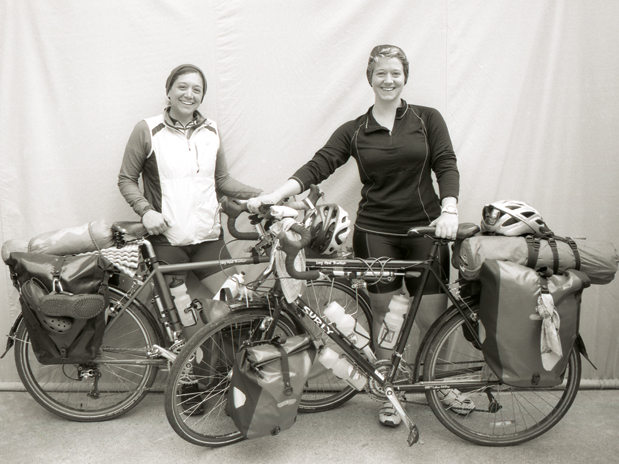 “My uncle John rode the Transam Trail the first year it opened (1976), when he was 25 years old. I’ve grown up hearing all about his great adventures from his ride across America,” McKinley Bryson (on the right) told us. 36 years later, in 2012, a 25-year-old McKinley and her friend Patrice Nora followed John (inset photo) along the same route and had some adventures of their own.

Whereas McKinley had been raised on stories of bike-travel adventures, for Patrice this was a whole new world. “In 2009, I hiked the Appalachian Trail, and that sparked the adventure bug,” Patrice said. “At the time, I didn’t own a bicycle and didn’t know you could ride across the country. I met a friend on the AT who had biked cross country and I said to myself ‘That sounds cool, yeah, I’ll do that!’”

One of their more unique experiences occured in Cambridge, Oregon, where the duo stopped in a local bar. There they met two motorcyclists — both named Bob — who bought the girls rounds of beer, fed them biscuits and homemade jam, and they entertained each other with anecdotes of their two-wheeled travel. The Bobs then invited the girls to join their annual motorcycle-club party happening a few days away and on their route in Lowell, Idaho, an invitation which they accepted with some trepidation. When Patrice and McKinley arrived it was dark and they arrived to cheers of encouragement. “The biker party was full of old, burly, mean-looking men who ended up being sweet old granddad-types,” McKinley said. “They were impressed with our huge cyclists’ appetites. We ate tons, drank beer, and sat up talking all night. They were great hosts — they even offered to set up our tents for us.”

In a similar vein, Patrice spoke of the people they met all along their route. “Having ridden across the U.S. … it drove home the point that there is way more good in this world than bad … I met the most wonderful, generous people. I can’t wait to do another big bike tour to see who else I will meet.”

How do they hope their trip will be remembered? As “epic fun!” Who knows, maybe in 36 years one of McKinley’s nieces or nephews will carry on the cross-country tradition.